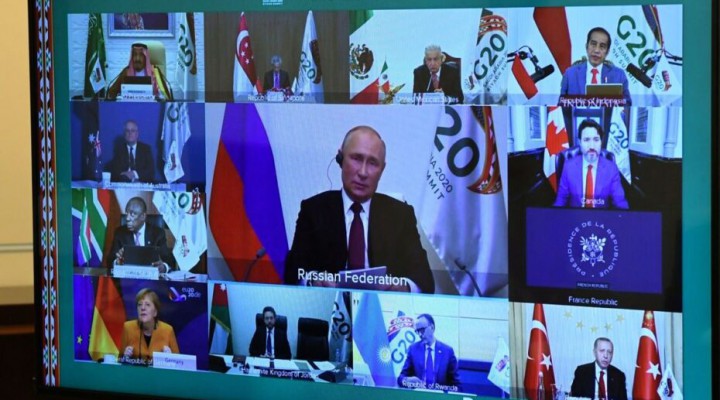 Welcome to the world of Pandemia. It is a place where a deadly virus pandemic spreads in an out-of-control fashion. Sheltering at home has led to widespread unemployment. With closed borders and reduced airline flights, international and some domestic travel are all but dead. Legislatures and judicial courts render their decisions over video-conferencing connections. People of all ages die without being able to physically say farewell to their loved ones.

Pandemia is a dark place, where modern medicine and public health are dismissed by the equivalents of alchemists and indulgence sellers of medieval times. Pandemia is also experiencing what the Gospel of Matthew in the New Testament of the Christian Bible calls an era of “wars and rumors of wars.”

Whether one is using as a baseline a Christian gospel or the plot line of a Hollywood global extinction-level film, the breakdown of world political and economic stability during a pandemic is currently a given. The world is currently experiencing political infrastructure collapse in numerous countries on several continents.

The current instability includes long-dormant conflicts erupting into open warfare between Azerbaijan and Armenia over the Armenian enclave of Nagorno-Karabakh inside Azerbaijan, Morocco and the Sahrawi POLISARIO front over control of parts of Western Sahara, Ethiopia’s central government and Tigray Region in a festering ethnic conflict, and India and China over disputed mountainous valleys and promontories in the Himalayan Range.

Nations such as Bahrain, Bolivia, Lebanon, and Angola saw their foreign- and local-currency ratings plummet as a result of economies frozen by Covid and a resultant worldwide financial body blow. South Africa and Zambia’ credit ratings plunged to near “junk” status.

Unemployment, financial collapse, and the Covid public health crisis caused two successive presidents of Peru to leave office during the pandemic. Martin Vizcarra was impeached by the Congress and removed from office on November 10. His successor, the President of Congress and leader of the opposition, Manuel Merino, resigned on November 15 amid widespread public protests to his rule. Former World Bank official Francisco Sagasti, who succeeded Merino as President of Congress, stepped up to the presidency. The situation in Peru was not an anomaly for Latin America.

The Vice President of Guatemala, Guillermo Castillo , suggested that he and President Alejandro Giammattei resign following the Congress’s budget cuts to public health and education. Widespread protests in Chile called for the resignation of President Sebastian Pinera, particularly following the October 25 referendum that saw 78 percent vote for scrapping the Constitution imposed by the former right-wing dictator, General Augusto Pinochet. Colombia’s far-right President Ivan Duque, whose popularity sits at 25 percent in opinion polls, faces mass protests over his efforts to roll back the peace agreement with the Revolutionary Armed Forces of Colombia (FARC) guerrillas and his links to his political mentor, the narco-terrorist politician and former president, Alvaro Uribe.

There were charges that some right-wing leaders, using Covid as a convenient political cover, extended their political authority in an unconstitutional manner. Covid national emergency decrees in Singapore, Hong Kong, Uganda, Turkey, Sri Lanka, Nigeria, and other countries were seen as having as much to do with curbing political freedom as curtailing the spread of the virus. Budgetary funds set aside for combatting the spread of Covid were, instead, used for political purposes by officials in the United States, Bosnia-Herzegovina, Mauritania, and other nations.

Donald Trump’s pre-election diagnosis with Covid, from which he experienced a rather rapid recovery, was viewed by some of his opponents as grandstanding at best and faking his virus diagnosis at worst, but, in any case, a jaded attempt to secure sympathy votes in the November 3 election. Trump, using widespread voting by mail and early voting as targets of opportunity – brought on by the pandemic – attempted to invalidate millions of votes for Democratic presidential candidate Joe Biden by making baseless accusations of election fraud. With Trump, heavily African-American voting precincts and cities were targeted by Trump and his forces. This phenomena was also seen with right-wing leaders around the world, including Prime Minister Narendra Modi’s party, which charged that Muslims were Covid-19 “superspreaders” and, therefore, should not be permitted to vote.

The pandemic has also spread within military forces. This has resulted in canceled military exercises and the quarantining and temporary disabling of ground, naval, and air forces. Although military commands have classified the degree to which their forces have been affected by Covid, it is known from news reports that the U.S., British, French, and Indian navies have been particularly hard hit by the virus.

Political and economic instability will only get worse before Covid is adequately abated by effective vaccines. In June of this year, the Institute for Economics and Peace (IEP) in Sydney, Australia, issued a report, titled “Covid-19 and Peace.” The report warned that “Covid-19 is going to affect political stability.” On the economic front, the IEP report paints a gloomy picture: “Countries with poor credit ratings, such as Brazil, Pakistan, Argentina, and Venezuela may not be able to borrow enough to sustain their economic recoveries, leading to increases in political instability, riots and violence.”

The IEP report also foresaw instability resulting from the false conspiracy theories being promulgated, particularly from the far-right, about Covid-19 and the public health measures being taken by governments to keep it from spreading: “There have been protests in the U.S., Germany, France, and Poland against lockdown regulations.” Many of these protests have been fueled by conspiracy and libertarian rhetoric and propaganda amplified by politicians like Trump, Brazilian President Jair Bolsonaro, and British far-right gadfly Nigel Farage.

As 2021 approached, with news of breakthroughs on Covid vaccines, there was a hope that Pandemia would soon be a place in the past. However, with trillions of dollars spent by national treasuries, not all of it for those most affected by the pandemic, and political and economic systems being upended by the virus, there was a fear that the worst parts of Pandemia – the fear, the scapegoating, reignited conflicts, famine, homelessness, permanently lost jobs, street unrest, and militarized borders – would remain for decades.

0 thoughts on “Pandemia’s Norm: Wars and Rumors of Wars”