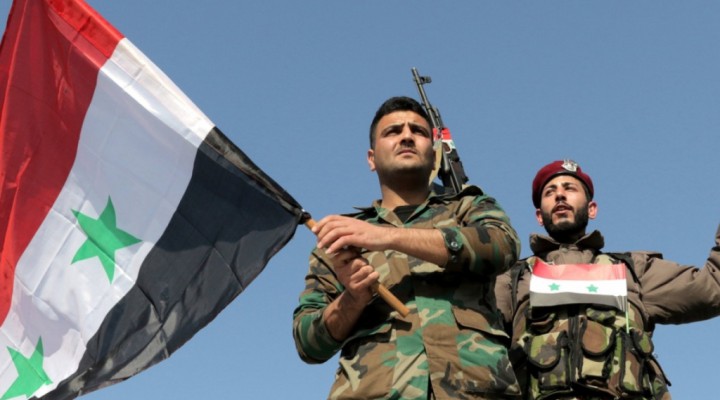 Probably the most hideous propaganda to be spewed by the establishment media cartel in the West is that which portrays the Syrian Arab Army as some kind of militia, “Assad’s gang”, disconnecting these defenders of homeland from the people they are fighting for and dying for every day.

I travelled to Aleppo by Pullman bus a few days ago, it was full of young soldiers heading to the frontlines in West Aleppo and Idlib. Young men from all areas of Syria, all communities, united in the common cause – to liberate their country from the infestation of extremism and sectarian terrorism, to bring peace back to a country that everyone in Syria describes as “the safest place in the Middle East before 2011”.

Most of them slept, curled up in their seats, exhausted.. others hopped off the bus when we stopped, to have a coffee or a cigarette. All of them polite, friendly and tired.

I was in Layramoun, an industrial area to the north of Aleppo two days ago as the SAA soldiers prepared for the military campaign to liberate the areas surrounding the factories that are occupied by the West’s “moderates” – Al Qaeda in Syria – it was freezing cold, a biting wind cutting to the bone, not one of the soldiers had really warm clothing or boots. They arrived one by one, their faces full of purpose, their weapons slung over their shoulder, greeting each other with grim camaraderie before the battle begins. Tanks nestling inside open garages, hidden from view, artillery trucks carrying missile launchers parked on the roadside, groups of soliders discussing plans… there was a feeling of calm before the storm.

These soldiers do not have the equipment or food that the terrorist groups have. Turkey ensures that their proxies have everything they need, including US manufactured TOW missiles (anti-tank). The SAA soldiers often do not have food for weeks/months, they survive literally on what they can forage except when local people risk their own lives to bring them sandwiches & tea. The illegal US/EU sanctions are a major part of the war waged against these soldiers who defy all this hardship until victory is the sweetest taste in their mouths.

Their weapons are old and battered compared to the sophisticated equipment supplied to groups like ISIS- BUT these young men are winning their battles, because they believe in their cause, they know they must win or die and that if they do not win, their people will die at the hands of these monsters camped on their land.

To reduce these heroes, these brave Resistance fighters to some kind of homogenous brigade of government militia is a crime in itself. Every young man (and woman) has dreams, hopes and ambitions that they put on hold to fight a war that has shattered their dreams.

When we see videos of terrorist missiles scything through these young people to cries of “Allah Akhbar”, more lives are lost, more blood is shed and more hopes are destroyed. Every single soldier is an individual fighting side by side with a thousands other individuals to defeat the enemy that would see them divided. They do not fight for one man, they fight for us all.

God bless the Syrian Arab Army and their allies.

Here are some messages from supporters of the Resistance from many countries in the world, showing that there are those who recognise the magnitude of the war being fought by the Syrian Arab Army on behalf of us all:

“There are times in history when only the bravest will find the courage to stand alone against the most powerful in their attempts to erase our existence from our planet. We are all living through one of those times and we are witnessing a battle of two worlds. On one side is the world of imperialist oppression, violence, perpetual war, to benefit the predators of our world – on the other are those who wish to see the supremacy of international law and perpetual peace with benefits for all mankind.

Those who have taken the ultimate stand against these forces of subjugation are the Syrian Arab Army and their allies who have stood firm and proud against overwhelming military force and a terrifying apparatus of war. The Syrian Arab Army does not only fight for Syria and its people, it fights for all of us – in Palestine, in the UK, the EU, South America, Yemen, everywhere… Syria is not only the cradle of civilization, it is the cradle of resistance around which are circling those who would destroy it and those who would defend it. We stand with those who defend it.

The following are statements from just some of those around the world who wish to acknowledge what the SAA has done to secure a better future for all humanity:

“We would like to thank the courageous soldiers of the Syrian Arab Army and we wish to show you that you are supported even behind the enemy lines in the countries who are so hostile towards your people. We thank you for your valiant battle against these imperialist nations because we understand you fight for us also.

We understand that if Syria is lost or destroyed, we are all facing the end of civilization. A victory for Syria will mean the end of the imperialist construct as we know it and there will be the opportunity for humanity to evolve away from endless war to protect the supremacy of one nation and its allies. We know you are our brave soldiers on the frontlines for humanity and wherever we live, wherever we come from we love and support you.”

“The Syrian Arab Army has resisted economic, media and military terrorism for 7 years. We call upon all peoples of the world to stand in solidarity with these courageous men & women of Syria in their stand against International terrorism. History will honour them in the future, but we must honour them now and not turn away from our duty to support them.

On behalf of all the awake in this world, I wish to recognise the sacrifices made by the SAA and their allies, sacrifices made with their blood that has mingled with the soil of their beloved nation, Syria. The soil from which all our futures will grow.

You gave up your families, your homes, your careers, your futures, to fight for the honour & freedom of your people, we will not ever let this sacrifice be in vain. The Syrian people live in our hearts, your kindness, generosity and compassion in the face of such adversity is the flame that will never be extinguished by the cold hand of oppression that is outstretched by our governments towards your country. Instead we extend our hands and place them inside your’s so we are one hand in this war for all our sakes. May God protect you in your mission which is our mission also.”

“I would like to express my absolute and boundless reverence for the brave young men and women of the Syrian Arab Army and their allies on the front lines. You need no introduction. You’ve fought tooth and nail to keep your country intact, for 7 years, against all odds, with some of the world’s most nefarious and powerfully dark forces lined up against you.

This war has been cruelly imposed upon you and is of greater significance than most realise. You are fighting not only for your nation but to defend your most precious asset, your independence, your right to self-determination. Syria is one of only a handful of nations to have retained its autonomy in this respect. You have defended the world against the most powerful global criminals who also committed the greatest crime of the 20th Century in 1948, the ethnic cleansing of Palestine which could never have succeeded without the endorsement of all the states now targeting Syria.

We stand in solidarity with your courage and your steadfastness that will bring with it a new world power paradigm, one that will ensure a better future for us all.”

“I am a Kemalist and anti-imperialist secular activist from Istanbul who wishes to salute the brave heroes who are battling imperialism on behalf of all people in this world who have suffered under this imperialist ideology that has preyed upon our world for centuries.

You, the SAA and allies, are not only defending Syria against the US-UK-EU-Gulf State-Zionist axis of hegemony but you are defending the entire region, my country & all humanity against the ravages of imperialist barbarism. Most people in Turkey with a heart and a brain stand in solidarity with your cause and salute your courage on the battlefield.”