How the Murdoch War Megaphone Pulls the Wool over Our Eyes 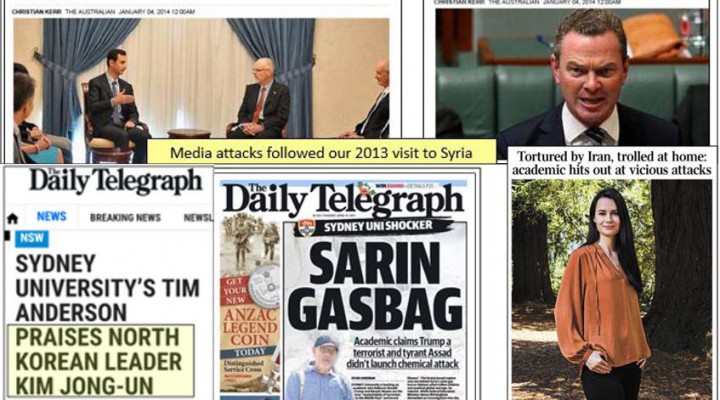 In some ways I should be flattered by repeated front page smears from the Murdoch media. After all, this appalling media monopoly has backed Australian involvement in every one of the seven Middle East wars over the past two decades, while I have opposed all of them.

But why such an effort? Why is it important to a huge company to repeatedly smear one person? What’s wrong with their usual tactic of just ignoring little people?

The latest smear arises from my criticism of the Australian corporate media for spreading misinformation over convicted Israeli spy, Dr Kylie Moore-Gilbert, who returned home to Australia from an Iranian jail late last year.

Of course, the war media asserts, Kylie was held in a “hellhole” for no reason at all, because ‘Iran is the problem’, not the US war machine.

So the latest Murdoch smear is that I supposedly made ‘vicious attacks’ on Kylie. Back in 2014 they said I had stirred ‘fresh controversy’ by visiting Syria. In 2017 they called me a ‘Sarin Gasbag’, for criticising the repeated fake stories about Syria using poison gas. And in 2018 they claimed I had praised the North Korean leader, when in fact I had written nothing at all about him.

I visit countries under attack by the big powers as part of my research work, in part because I believe that war and threats of war dehumanise entire populations, and undermine our understandings of other cultures.

And yes I do compare the Israeli massacres in Gaza with the racial massacres of the Nazis, because the gravity of their crimes against Palestinians is far too often understated.

Well this work seems to undermine the drive for war; so the Murdoch media periodically unloads a torrent of abuse on me, in attempts to intimidate anyone else from visiting or sympathising with peoples under attack.

Putting aside the petty distortions and lies that abound in these Murdoch attacks, I would like to focus on some common threads in this propaganda.

First the Murdoch scribes use classical propaganda devices with deceptive simplicity, repetitively asserting the same lines, without the need for much rational argument.

The old proverb “Oh! that mine enemy would write a book!” meant that one’s enemies’ words could be used against them. No such nicety is required by the Murdoch stable. I have not seen either of my research books on the Middle East wars (The Dirty War on Syria 2016; and Axis of Resistance 2019) quoted by them. They seem to not care about such trivia.

Second, they seem unable to imagine that someone may act on principle – in this case defend targeted countries from aggression – unless they are a paid agent or a fanatic. So the latest  from Stephen Rice showcases a string of abuse from Kylie, saying I was an

“Iran puppet and conspiracy theory zealot … [who] flew to Damascus for a photo op with Bashar Al Assad at the same time Assad was bombing his own civilian population with chemical weapons … He is clearly just a mouthpiece for these regimes … [nevertheless] for me it’s quite upsetting to be called a Zionist.”

Recent exchanges have led Kylie to drop her previous pseudo-neutral stance, of a disinterested observer, to speak of the “odious regimes” of Iran and Syria and to repeat the fake and ludicrous war propaganda clichés (“Assad … bombing his own civilian population”) against Syria. And not a word against the Apartheid regime in Palestine.

Her line of reasoning, and that of the Murdoch stable which uses her, suggests that people could not oppose Australia being subject to foreign invasions, terrorism and economic siege unless they were fanatical mouthpieces for Australia’s hereditary monarchy and Scott Morrison. Just childish.

That brings me to the question of Kylie as an Israeli spy, which to my mind might not be such a big issue had it not been denied so vehemently by the Murdoch media and Canberra.

What basis was there for her conviction? ‘nothing’, says the Murdoch stable.

In fact there is such information. First of all, Iran’s media published a short documentary which summarised the case; a version with an English translation of the narration is published here. That video says Kylie was recruited to the Mossad by her then Israeli boyfriend Ruslan Hodorov. Only after her release from prison did western media acknowledge that she had married an Israeli. But there is more.

Iran says she at first travelled to Syria, then began to work on Israel’s Iranian nuclear program file, which involved finding out ways in which Iran bypassed US sanctions. After military and leadership training she was appointed as an inspector, vetting Iranian defectors who visited Israel. Then she carried out her two visits to Iran, on the second of which she was captured. This is Iran’s summary of their case.

It has corroboration in Israeli sources. Murdoch journalist Stephen Rice was either too lazy or too dishonest to look at the links I sent him, the day before his article, as he mentioned just one Israeli article: “but the linked article says nothing about “leadership” or “training”; those words are an invention by Dr Anderson.”

In fact I had referred Stephen to several articles, as you can see in the two DMs reproduced below. The Plus61j article, combined with information on Tikvah fellowships and the Ein Prat academy (where Kylie spent one month in 2011), show that she was indeed engaged in Israeli “leadership training”.

The Ein Prat Israeli leadership academy, attended by Kylie Moore-Gilbert as a Tikvah fellow, is set in Alon ‘settlement’, one of many illegal colonies in the occupied Palestinian West Bank. It sits right in the middle of the occupied West Bank, between Jerusalem and Jericho. Travel to this academy must be under armed escort and entry to the colony is by an ‘Israeli only’ road. The Plus61j article simply says that Kylie “explored her Jewish identity in an Israeli program on the West Bank in 2011”.

However the Tikvah Fund, which provided her with a scholarship, says it is “committed to supporting the intellectual, religious, and political leaders of the Jewish people and the Jewish State”, while Ein Prat calls itself an “Academy for Leadership” which “has acted as an incubator for civilian leadership in Israeli society since 2001. We believe that young people, secular and religious, have the power to build a better Israel.”

Since the Israeli colony has engaged in literally hundreds of attacks on “Iran backed” groups in the region and has assassinated several of Iran’s nuclear scientists, it is not hard to imagine why Tehran does not look kindly on Israeli agents.

Nevertheless, apparently confident that his Murdoch megaphone was loud enough to ignore any such any checking, Stephen Rice pretended Kylie’s Israeli “leadership training” simply did not exist. He misled his readers.

This wilful ignorance and distortion of facts allows the Murdoch stable to keep representing the US backed regional wars (in Palestine, Afghanistan, Iraq, Libya, Lebanon, Syria and Yemen) as humanitarian exercises.

For example, the Murdoch media backs US Secretary of State Blinken’s absurd claims that his country is the greatest humanitarian donor to the Syrian people, while ignoring facts that I point out in my books: that this same USA is bombing Syria, backing anti-Syria terrorists, imposing a genocidal siege and occupying Syria’s land while it steals Syria’s fuel and food.

This is how the Murdoch War Megaphone tries to pull the wool over our eyes.