HOME / SOCIAL/CULTURAL / How Has Cuba Faced the COVID-19 Epidemic? 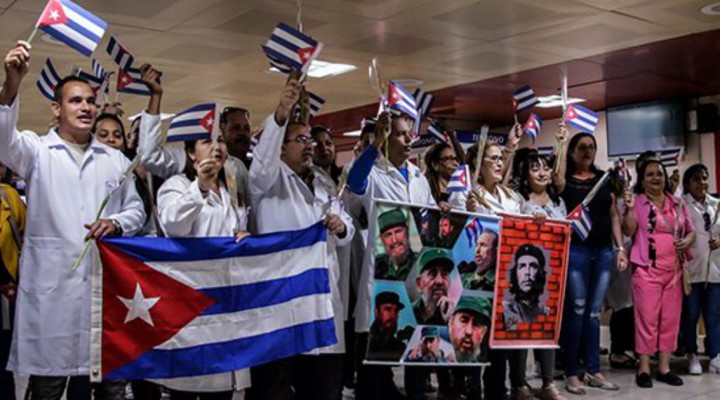 By mid-April, more than 900 Cuban doctors and nurses had traveled to 17 countries to help with the COVID-19 pandemic, with the first group of 53 arriving in hard-hit Italy on 22 March (Vicent 2020). Other countries with Cuban ‘Henry Reeves’ (international solidarity) brigades included Spain, Argentina and Angola (Rodríguez 2020). The pattern of financing Cuban medical assistance in recent years has been that countries ‘compensate’ according to their capacity; that means poor countries pay very little and rich countries pay a lot (Anderson 2014).

Cuba has become famous for its internationalism and solidarity. Many western commentators call the latest missions an example of “Cuba’s deep and long-lasting commitment to humanitarian solidarity with other countries” (Kornbluh 2020). However, in April the number of infections within Cuba itself began to rise. So how has Cuba dealt with the virus at home? Cuba’s approach is a useful reference point because the country has a proactive approach to public health and more distance than most from the private health corporations that dominate most other countries.

*(Cuban doctors arrive in Italy to help with what was then the worst COVID-19 outbreak in the world. Credit: Daniele Mascolo/ Reuters)

The first weeks of Cuban experience with COVID-19 shows that responses to the epidemic share some common features but also have important differences. As I pointed out in an earlier, longer article ‘Public Health, COVID-19 and Recovery’ (Anderson 2020), both the UK and the USA, supposedly top ranked in ‘preparedness’ for epidemics (IPT 2020), showed very poor relative outcomes in terms of infections and deaths. Those outcomes and some adverse community reactions were aggravated by erratic policy and practice, where both the USA and UK seemed to swing from one extreme to another, in terms of protective measures  (Anderson 2020).

Those poor outcomes – in particular the tens of thousands of deaths in several wealthy countries – worsened already low levels of trust between citizenry and those states deeply embedded with large corporations.  Recently in the USA, for example, only 39% of US citizens were said to trust their national government (UNDP 2018). More specifically, only 37% said they trusted the Trump administration to deal with the COVID-19 crisis, with 60% saying they had “not very much or no trust at all” in what Trump was saying. (Montanaro 2020).

By contrast in a 2015 poll run by a Miami company and commissioned by The Washington Post “68% of Cubans” said they were “satisfied with their healthcare system”. A 2007 Gallup poll had put the figure at 75%, compared to 57% in the rest of Latin America (Kunzmann 2015). Cuba’s health system is 95% publicly funded and all its doctors are salaried. Further, Cuba has a much higher level of participation in elections and referenda on important issues than the USA. For example, “81% of the 8.7 million electorate” voted in the 2019 constitutional changes, after a long period of community discussion and hundreds of amendments to the original proposal (Frank and Acosta 2019). Voter turnout at Cuban elections has not fallen below 80% in recent decades, while in the USA it ranges from 40% to 65% (IDEA 2020). Mass organizations such as the Committees for the Defence of the Revolution (CDRs), the trade unions and the Federation of Cuban Women assist Cuba in matters of preventive health and health education (Bercovich 2020). All of that means that Cuban citizens both understand and respond better to public health mobilizations.

This is important when it comes to social restrictions in the name of a public health crisis. There is a long history of quarantine measures being imposed, to the detriment of normal civil liberties, during and especially in the uncertainty period of a dangerous epidemic. The important question is, how are those measures formed, are they proportionate and the least restrictive possible in relation to the common threat? In relation to freedom of movement, for example, the UN Human Rights Commission has put it this way:

“Restrictive measures must conform to the principle of proportionality; they must be appropriate to achieve their protective function; they must be the least intrusive instrument amongst those which might achieve the desired result; and they must be proportionate to the interest to be protected” (HRC 1999: 14).

Initially in Cuba there was no general mandatory quarantine but there were rising normative pressures and restrictions on transport were increasing. Commentators say there was faith in the government’s public health aims and methods, and that social isolation measures gradually increased (Bercovich 2020). By contrast, the pandemic saw the western world hit with erratic political decisions which only helped inflame wild theories – for example claiming the epidemic did not really exist or was a monstrous plot – reactions which tended to throw the proverbial (public health) ‘baby’ out with the ‘bathwater’.

Some recourse to evidence and reason is needed. So what might we learn from the practice of an independent nation, with a famous specialized focus on public health? Cuba confirmed its first cases of COVID-19 on 10 March, they were three Italian tourists, staying in the southern town of Trinidad (Acosta and Marsh 2020). A week later they had detected 16 cases, visitors and Cubans who had arrived from overseas (Cubadebate 2020a). After a month, on 10 April, there were 620 confirmed cases, most of them Cubans, and 16 deaths. Most of the critical ill were elderly Cubans (Cubadebate 2020b). The Ministry of Public Health classed the initial stage as ‘pre-epidemic, but after 6 April it was called a ‘Phase of Limited Community Transmission’ (Carmona Tamayo and Fariñas Acosta 2020), see Graphic 2.

Graphic 2: Evolution of COVID-19 in Cuba

Cuba began quarantine–like measures just before there were any detected cases, but aware of what had happened in other countries. The theme of ‘stay at home’ (quedese en casa) was put out in the Cuban media as early as 6 March (Granma 2020). But the government began to move into a more developed strategy a few days later, as the first infections were detected and when, on 11 March, World Health Organization Director General Tedros Adhanom Ghebreyesus declared a global pandemic. Cuba began to cooperate with the local branch of the WHO in preparing its response, including large scale testing, detection and community protection measures (OPS 2020). In mid-March there were only 60,000 tourists in the country. Stopping all tourist entries was one of the first measures, so most international flights were stopped on 1 April. 10 days later only 7,000 tourists remained (Bercovich 2020).

A specialist hospital with isolation wards was set up in Matanzas, for the first cases (OPS 2020). Community activist Marcia Iglesias says that early measures were some normative social isolation, plus the closure of airports and inter-provincial trains. Public and private transport was closed down, except transport for workers in essential industries. An initial aim was to reduce transport to 50%, to prevent overcrowding. Then there was obligatory use of masks in all transport. Elderly and vulnerable people (those with diabetes, high blood pressure, other heart problems, bronchial asthma and kidney problems) were urged to remain at home and food was brought to them, either by younger family members or through the family assistance agency (Iglesias 2020).

The sale of alcoholic drinks was stopped and cafes and restaurants only sold take–away food. On 10 April there was free distribution to families of a module of soap and hygiene products (important because there had been a shortage of soap), and from that time only basic products including food and hygiene products were sold in shops. Large shops were closed (Iglesias 2020). Every day there were house to house surveys, to see the state of family health and to check for fevers. This is something embedded in the Cuban health system, which starts at the family doctor level; often Cubans don’t go to the doctor, the doctor comes to them. The visits are carried out by one doctor, one nurse and two medical students (including students from other countries who study Cuba). Further, the whole population gets daily television education on the state of the epidemic. Every day at 11am the epidemiological situation of the country is explained, either by the National Director of Epidemiology, Dr Francisco Durán, or by the Minister of Health (Iglesias 2020).

So in Cuba’s first month several quarantine–like restrictions were imposed, but with daily education, communication and some extra measures of social support. As in some other countries, this was not exactly a ‘lockdown’, in the manner of Wuhan or some parts of northern Italy. However the strong epidemiological surveillance, in particular from the house to house visits and testing, has led to some more focussed quarantine lockdowns. Communities have been classified according to their degree of contagion or contacts made with those infected, and in some cases a more strict 14 days quarantine has been imposed just in those areas (Iglesias 2020). In April there was a specially strict ‘lockdown’ quarantine on 11 apartment buildings and 2 duplex houses in the city of Matanzas, where a group of infections had been detected (de Jesús 2020). This shows that careful vigilance can allow for focussed restrictions, rather than ‘locking down’ entire cities.

In pharmaceutical treatment, Cuba worked with China in Wuhan, presenting their version of the immunotherapy drug Interferon (Interferon Alpha-2B Recombinant – IFNrec) at the head of a group of 22 medications, including other anti-virals. Cuba and China have the joint venture Changchun Heber Biological Technology facility, based in Jilin, China. They are tested by both Chinese and Cuban health authorities and those are the same medicines used in Cuba (del Sol González 2020). In contrast, very few doctors in the USA have been using antiviral drugs for COVID-19 infections (Sermo 2020). Cuba is also working on its own vaccine for COVID-19, aware that there are more than 60 candidates for a vaccine, with some already in human trials (ACN 2020)

Cuba’s approach to COVID-19 tells us that a lot has been shared in public health on how to deal with epidemics, but that important differences of approach remain. The Cuban population is more engaged and well educated on health matters, and has a relatively high degree of confidence in its public health system. Preventive quarantine measures were taken early, including the ‘stay at home’ theme even before there were any detected cases. After cases were detected there was a tightening of social restrictions, to prevent contagion, but these were informed by a systematic vigilance of cases, which allowed severe quarantine only in communities or buildings known to have contagion, or contact with contagion.

Finally, Cuba and China moved early to use anti-viral and immunotherapy drugs, when the USA was relying more on marginally effective malaria drugs, or no drugs at all. The limited use of antivirals in the USA for COVD19 treatment is probably due to their expense. Cuba has world class testing facilities and uses them to certify medications of for the ALBA group of Latin American companies. However, even if Cuba is not first to produce a vaccine – and it would be blocked from exporting both by US ‘sanctions’ and the Big Pharma oligopoly – it will certainly test and use its own vaccine at home. Treatment will be free for all Cubans.

0 thoughts on “How Has Cuba Faced the COVID-19 Epidemic?”