HOME / WORLD / The genealogy of the Kurdish question 1/3 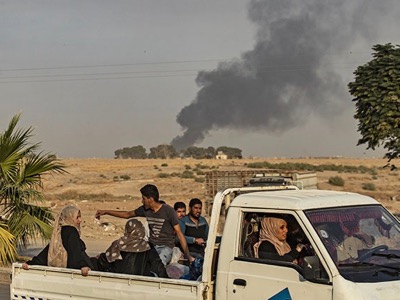 The unanimous international community multiplies its condemnation of the military offensive in Rojava and watches helplessly as tens of thousands of Kurds flee, pursued by the Turkish army. However, no one intervenes, considering that a massacre may be the only possible way to restore peace, given the inextricable situation created by France and the crimes against humanity committed by Kurdish combatants and civilians.

All wars involve a process of simplification: there are only two sides on a battlefield and everyone has to choose their own. In the Middle East, where there are an incredible number of communities and ideologies, this process is particularly terrifying because none of the particularities of these groups can be expressed and each must ally itself with others of which it disapproves.

When a war is coming to an end, everyone tries to erase the crimes they have committed, voluntarily or not, and sometimes to remove cumbersome allies they want to forget. Many then try to rebuild the past to give themselves the beautiful role. That is exactly what we are witnessing today with the Turkish operation “Source of Peace” on the Syrian border and the unlikely reactions it provokes.

To understand what is happening, it is not enough to know that everyone is lying. We must also discover what everyone is hiding and accept it, even when we see that those we admired until then are really despicable.

Genealogy of the Problem

If we believe European communications, we might think that the evil Turks will exterminate the kind Kurds that the wise Europeans are trying to save despite the cowardly United States. However, none of these four powers plays the role assigned to it.

First, the current event must be seen in the context of the “War against Syria”, of which it is only a battle, and in the context of the “Remodelling of the Broader Middle East”, of which the Syrian conflict is only one stage. On the occasion of the attacks of 11 September 2001, US Secretary of Defense Donald Rumsfeld and his new Director of “Force Transformation”, Admiral Arthur Cebrowski, adapted the Pentagon’s strategy to financial capitalism. They decided to divide the world into two zones: one that would be the one of economic globalization and the other that would be seen as a simple reserve of raw materials. The US armies would be responsible for removing state structures in this second region of the world so that no one could resist this new division of labour [1]. They began with the “Broader Middle East”.

The Syrian Accountability Act (2003), following Afghanistan and Iraq, had been planned to destroy the Syrian Arab Republic, but various contingencies have postponed this operation to 2011. The plan of attack was reorganized in the light of the British colonial experience in this region. London advised not to completely destroy states, to restore a minimal state in Iraq and to keep puppet governments capable of administering the daily lives of peoples. Based on the “Great Arab Revolt” of Lawrence of Arabia, which they organized in 1915, it was a question of organizing an “Arab Spring” which placed the Brotherhood of the Muslim Brotherhood in power and no longer that of the Wahhabites [2]. The pro-Western regimes of Tunisia and Egypt were overthrown first, then Libya and Syria were attacked.

At first, NATO member Turkey refused to participate in the war against Libya, its first customer, and Syria, with which it had created a common market. The French Minister of Foreign Affairs, Alain Juppé, then had the idea of killing two birds with one stone. He proposed to his Turkish counterpart, Ahmet Davutoğlu, to resolve the Kurdish question together in exchange for Turkey’s entry into the war against Libya and Syria. The two men signed a Secret Protocol which provided for the creation of a Kurdistan not in the Kurdish territories of Turkey, but in the Aramaic and Arab territories of Syria [3]. Turkey, which has excellent relations with the Iraqi Kurdistan Regional Government, wanted a second Kurdistan to be created, thus putting an end to Kurdish independence on its own soil. France, which had recruited Kurdish tribes in 1911 to repress Arab nationalists, intended to finally create a rump Kurdistan in the region as the British had succeeded in creating a Jewish colony in Palestine. The French and Turks obtained the support of the Israelis who already controlled Iraqi Kurdistan with the clan of Barzani , officially a member of Mossad. 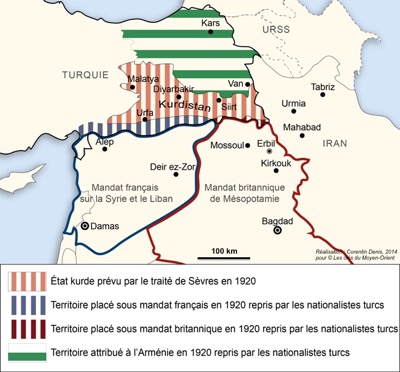 In brown: Kurdistan designed by the King-Crane Commission, validated by US President Woodrow Wilson and adopted in 1920 by the Sèvres Conference.

The Kurds are a nomadic people (that is the exact meaning of the word “Kurdish”) who used to travel in the Euphrates Valley, in Iraq, Syria and Turkey today. Organized not in a tribal manner, but in a clan-based manner, and renowned for their courage, they created many dynasties that ruled in the Arab world (including that of Saladin the Magnificent) and Persia, and provided auxiliaries to various armies. At the beginning of the 20th century, some of them were recruited by the Ottomans to massacre the non-Muslim populations of Turkey, particularly the Armenians. On this occasion, they settled in Anatolia, while the others remained nomads. At the end of the First World War, U.S. President Woodrow Wilson, pursuant to paragraph 12 of his 14 points (goals of war), created a Kurdistan on the ruins of the Ottoman Empire. To delimit its territory, he sent the King Crane Commission to the area, while the Kurds continued the massacre of the Armenians. The experts identified an area in Anatolia and warned Wilson of the devastating consequences of an extension or displacement of this territory. But the Ottoman Empire was overthrown from the inside by Mustafa Kemal who proclaimed the Republic and refused the territorial loss imposed by the Wilsonian project. In the end, Kurdistan did not see the light of day.

For a century, the Turkish Kurds tried to secede from Turkey. In the 1980s, the PKK Marxist-Leninists opened a real civil war against Ankara, which was very severely repressed. Many fled to northern Syria, under the protection of President Hafez el-Assad. When their leader Abdullah Öcallan was arrested by the Israelis and handed over to the Turks, they abandoned the armed struggle. At the end of the Cold War, the PKK, no longer funded by the Soviet Union, was penetrated by the CIA and mutated. It abandoned Marxist doctrine and became anarchistic, renounced the struggle against imperialism and placed itself in the service of NATO. The Atlantic Alliance made extensive use of its terrorist operations to contain the impulsiveness of its Turkish member.

In 1991, the international community waged a war against Iraq, which had just invaded Kuwait. At the end of the war, Westerners encouraged the Shia and Kurdish oppositions to revolt against President Saddam Hussein’s Sunni regime. The United States and the United Kingdom allowed 200,000 people to be massacred, but occupied an area of the country from which they excluded the Iraqi army. They drove out the inhabitants and gathered the Iraqi Kurds there. It is this area that was reintegrated into Iraq after the 2003 war and became Iraqi Kurdistan around the Barzani clan. 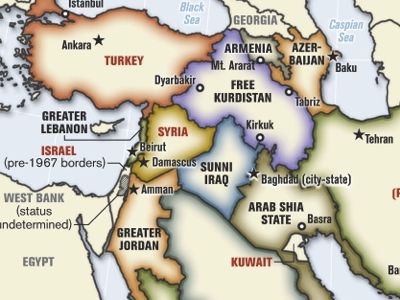 At the beginning of the war against Syria, President Bashar al-Assad granted Syrian nationality to Kurdish political refugees and their children. They immediately went to Damascus to defend the north of the country against foreign jihadists. But NATO woke up the Turkish PKK and sent it to mobilize the Kurds of Syria and Iraq to create a very large Kurdistan, as planned by the Pentagon since 2001 and recorded by the staff map released by Colonel Ralph Peters in 2005. 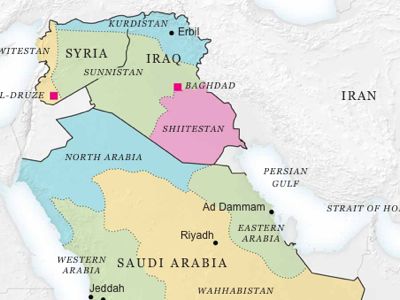 The map of the “Remodeling of the Broader Middle East”, modified after the failure of the first war against Syria.
Source: “Imagining a Remapped Middle East”, Robin Wright, The New York Times Sunday Review, September 28, 2013.

This project (aimed at dividing the region on ethnic grounds) did not correspond at all to that of President Wilson in 1919 (aimed at recognising the rights of the Kurdish people), nor to that of the French (aimed at rewarding mercenaries). It was far too large for them and they could not hope to control it. On the other hand, it enchanted the Israelis who saw it as a way to contain Syria from behind. However, it proved impossible to achieve. The USIP, a “Five Eyes” institute linked to the Pentagon, proposed to modify it. Greater Kurdistan would be reduced in favour of an extension of Iraqi Sunnistan [4] that would be entrusted to a jihadist organization: the future Daesh.

The Kurds of the YPG, the Syrian branch of the PKK, tried to create a new state, Rojava, with the help of US forces. The Pentagon used them to confine the jihadists to the area they had been assigned. There was never a theological or ideological struggle between the YPG and Daesh, it was just a rivalry for a territory to be shared on the rubble of Iraq and Syria. And when the Emirate of Daesh collapsed, the YPG helped the jihadists join al-Qaeda forces in Idleb by crossing their “Kurdistan”.

The Iraqi Kurds of the Barzani clan were directly involved in Daesh’s conquest of Iraq. According to the PKK, the son of the President and Head of Intelligence of the Iraqi Kurdish Regional Government, Masrour “Jomaaa” Barzani, attended the secret CIA meeting in Amman on 1 June 2014, which planned this operation [5]. The Barzani did not fight any battle against Daesh. They simply enforced their territory and sent them to face the Sunnis. Worse still, they allowed Daesh to enslave non-Muslim Kurds, the Yezidis, during the Battle of Sinjar. Those who were rescued were saved by Turkish PKK and Syrian YPG fighters dispatched to the area.

On November 27, 2017, the Barzanis organised – with solely Israel’s support – a referendum on self-determination in Iraqi Kurdistan, which they lost despite obvious trickery. The Arab world discovered with amazement, on election night, a tide of Israeli flags in Erbil. According to Israel-Kurd magazine, Israeli Prime Minister Benjamin Netanyahu had pledged to transfer 200,000 Israeli Kurds in the event of a referendum victory in order to protect the new state.

To enjoy the right to self-determination, a people must first be united, which has never been the case for the Kurds. It must then live in a territory where it is in the majority, which was only the case in Anatolia since the Armenian genocide, then also in northern Iraq since the ethnic cleansing of the no-flying area in the aftermath of the “Desert Storm”, and finally in north-eastern Syria since the expulsion of Christian Assyrians and Arabs. To recognize this right today is to validate crimes against humanity.

0 thoughts on “The genealogy of the Kurdish question 1/3”