The European Union begins its dissolution 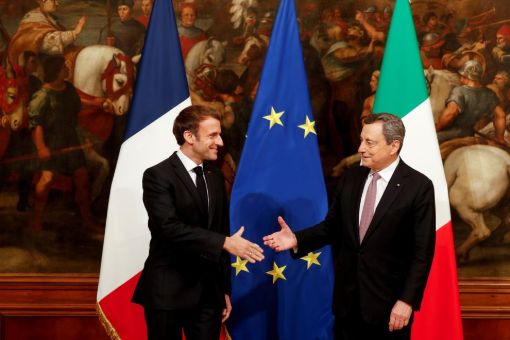 The Quirinal Treaty, concluded by France and Italy, as well as the government project of the next German chancellor, Olaf Schotz, are incompatible with the history of the European Union. Paris and Berlin have just taken concrete steps that can only lead to the inevitable dissolution of the European Union.

At the end of the Second World War, Winston Churchill devised a system to ensure that Western Europe would not fall into the hands of the Soviet Union and that they would retain control. The idea was to create a European common market with the ruined countries that accepted the Marshall Plan [1].

The United States and the United Kingdom were moving forward together. In a few years, they laid the foundations of our world: Nato is a military alliance dominated by them, while what became the European Union is the civil organisation for their allies. Of course, members of one institution are not necessarily members of the other, but the fact remains that, based in Brussels, both are two sides of the same coin. The joint services of the two structures are discreetly based in Luxembourg.

After the crisis between Washington and London during the Suez expedition, the United Kingdom, which was losing its Empire, decided to join what was not yet the European Union. If Harold Macmillan failed in 1958, Edward Heath succeeded in 1973. But as the balance of power shifted, the UK left the EU at the end of 2020, turning back to its former Empire (’Global Britain’).

Germany, which was occupied by the four victors of the Second World War until 1990, i.e. after its reunification, has always been satisfied with no longer being a military power. Even today, its secret services, reorganised by the USA with their former Nazi personnel, are still entirely devoted to them, while the Pentagon has very large military bases there with a fiction of extraterritoriality.

France, on the other hand, dreams of military independence. This is why Charles De Gaulle, who had been the leader of Free France during the Second World War, made it leave the integrated command of NATO in 1966. But Nicolas Sarkozy, who was raised as a teenager by the son of the US creator of NATO’s Stay-behind network (“Gladio”), reinstated it in 2009. Today, the French army’s external operations are therefore, in practice, commanded in fine by US officers.

For years, Germany and France took the lead in what became the European Union. François Mitterrand and Helmut Kohl imagined transforming the common market into a supranational state – still a vassal of the United States – capable of competing with the USSR and China: the European Union. This structure, to which the United States demanded that the former members of the Warsaw Pact join at the same time as they joined NATO, became a colossal bureaucracy. Despite appearances, the Council of Heads of State and Government is not a super-government, but a recording chamber for Nato decisions. These decisions are drawn up by the Atlantic Alliance – always dominated by the United States and the United Kingdom -, then passed on to the European Commission, submitted to the Parliament and finally ratified by the Council.

It is important to understand that Nato’s vocation is to interfere in everything: from the composition of chocolate (there is a bar of chocolate in a soldier’s ration) to the construction of bridges (they must be usable by armoured vehicles), not forgetting anti-Covid vaccines (the health of civilians depends on that of the military) or bank transfers (enemy transactions must be monitored).

The British and French armies were the only two with any weight in the European Union. They therefore came together with the Lancaster House Treaties in 2010. But when the Brexit occurred, the French army was still alone, as evidenced by the termination of the Franco-Australian submarine contracts in favour of London. The only option left to France was to move closer to the Italian army, which was half the size of the French one. This is what has just been decided with the Treaty of the Quirinal (2021). This operation was facilitated by the common ideology of Emmanuel Macron (former banker at Rothschild) and Mario Draghi (former banker at Goldman Sachs) and their common leadership on the political response to the Covid epidemic. In passing, one should note the implausible politically correct jargon in which this document is written, very far from the Latin traditions [3].

It happens that at the same time, Chancellor Angela Merkel is giving way to Olaf Scholtz. He has no interest in military issues or in the French and Italian budget deficits. The coalition agreement of his government [4] aligns German foreign policy in every respect with that of the Anglo-Saxons (USA + UK).

Until then, Angela Merkel’s governments fought against antisemitism. The Scholz government goes further by committing itself to support “all initiatives that promote Jewish life and promote its diversity”. It is no longer a question of protecting a minority, but of promoting it.

Regarding Israel, which the UK and the US created in an imperial logic [5], the new agreement also states that “Israel’s security is a national interest” of Germany, and promises to block “antisemitic attempts to condemn Israel, including in the UN”. He declared that Germany would continue to support the two-state solution to the Israeli-Palestinian conflict (i.e. oppose the principle of “one man, one vote”) and welcomed the normalisation of relations between Israel and the Arab countries. In doing so, the Scholz government is burying the traditional policy of the SPD, whose foreign minister, Sigmar Gabriel (2013-18), described the Israeli regime as ’apartheid’.

Olaf Schotz is a lawyer concerned with making his country’s industry work on the basis of a compromise between workers and employers. He has never been overly active on international issues. He has appointed the green lawyer Annalena Baerbock as foreign minister. She is not only an advocate of low-carbon energy, but also an agent of influence for NATO. She is a strong supporter of Ukraine’s membership of NATO and the European Union. It is opposed to Russia and therefore rejects the Nord Stream 2 pipeline and encourages the project of gas terminals to import gas from the United States by liquefied natural gas tankers despite the exorbitant price of these facilities. Finally, it calls China a “systemic rival” and supports all its separatisms, Taiwanese, Tibetan and Uighur.

It is foreseeable that the policies of Berlin and Paris will slowly drift apart until the conflict between the two countries, which caused three wars from 1870 to 1945, resurfaces. Contrary to the publicity, as I mentioned above, the European Union was not created to ensure peace in Western Europe, but to stabilise the populations in the Anglo-Saxon camp during the Cold War. The Franco-German conflict was never resolved. The European Union, far from making peace, has put a quilt over the problem rather than solving it. During the Yugoslav wars, the two countries fought hard militarily: Germany supported Croatia, while France supported Serbia. Berlin and Paris got along within the borders of the Union, but were at war with each other outside. Special operations specialists know that there were deaths on both sides.

The foreign policies that work are those that reflect the identity of their nation. Today, the UK and Germany are moving on, proud of who they are, not France, which is going through an identity crisis. Emmanuel Macron said at the beginning of his mandate that “there is no French culture”. He has changed his tune since then, under pressure from his people; his speech, but not his thinking. France has the means, but no longer knows who she is. It is pursuing the chimera of an independent European Union competing with the United States, while the other 26 members do not want it. Germany, however, is making a mistake by sheltering under the US nuclear umbrella when that great power has begun to decay.

It is clear that we have just entered the phase of dissolution of the European Union. This is a chance for everyone to regain their full independence, so sclerotic is this structure. But it is also, and above all, a challenge that can quickly turn into a drama. The United States is collapsing in on itself and soon the European Union will have no overlord. Its members will have to position themselves in relation to each other. It is extremely urgent that we begin to understand each other not just as trading partners, but as partners in all things. Failure to do so will inevitably lead to catastrophe, to all-out war.

Everyone has seen that all the members of the European Union – except the British, but they have left – share common cultural elements. These elements are also those of Russia, which is closer to the Union than the United Kingdom is. It is now possible to rebuild Europe as a network of states and no longer as a centralised bureaucracy, by opening up to those that were artificially separated by the Anglo-Saxons to ensure their domination of the continent throughout the Cold War. This is what Charles De Gaulle was talking about when, in opposition to Winston Churchill, he said he wanted “Europe from Brest to Vladivostok”.

[2] Article 42(7): «If a Member State is the victim of armed aggression on its territory, the other Member States shall have towards it an obligation of aid and assistance by all the means in their power, in accordance with Article 51 of the United Nations Charter. This shall not prejudice the specific character of the security and defence policy of certain Member States.Commitments and cooperation in this area shall be consistent with commitments under the North Atlantic Treaty Organisation, which, for those States which are members of it, remains the foundation of their collective defence and the forum for its implementation».

[5] “Who is the Enemy?”, by Thierry Meyssan, Translation Roger Lagassé, Voltaire Network, 4 August 2014.

0 thoughts on “The European Union begins its dissolution”