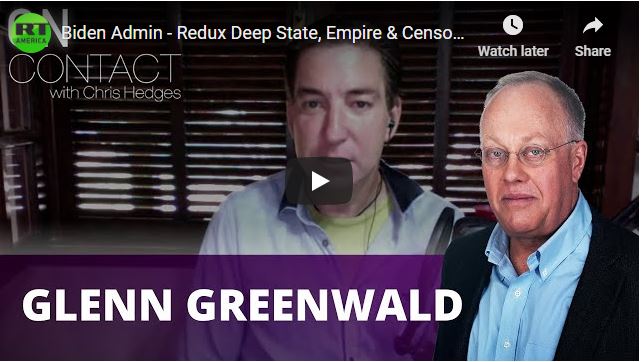 RT America- On this show this week, Chris Hedges talks to Pulitzer prize-winning journalist Glenn Greenwald about the incoming Biden administration and what it will mean for a country in crisis, ravaged by a pandemic it cannot control, hostage to corporate power and bifurcated into warring factions.

Glenn Greenwald is the author of several bestsellers, including How Would a Patriot Act? and With Liberty and Justice for Some. His most recent book is No Place to Hide: Edward Snowden, the NSA, and the U.S. Surveillance State. Greenwald is a former constitutional law and civil rights litigator. He was a columnist for The Guardian until October 2013 and was the founding editor of the media outlet, The Intercept. He is a frequent guest on Fox News, Rolling Stone and various other television and radio outlets. He has won numerous awards for his NSA reporting, including the 2013 Polk Award for national security reporting, the top 2013 investigative journalism award from the Online News Association, the Esso Award for Excellence in Reporting (the Brazilian equivalent of the Pulitzer Prize), and the 2013 Pioneer Award from Electronic Frontier Foundation. He also received the first annual I. F. Stone Award for Independent Journalism in 2009 and a 2010 Online Journalism Award for his investigative work on the arrest and detention of Chelsea Manning. In 2013, Greenwald led the Guardian reporting that was awarded the Pulitzer Prize for public service.