HOME / Exclusive Subjects / 102 Years after the Hujair Conference: When the A’amelis voted for the option of resistance 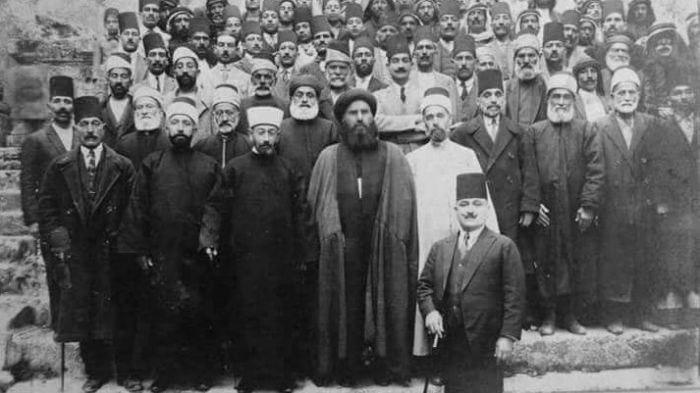 Exclusive– As Lebanon is on the cusp of decisive parliamentary elections – and we do not exaggerate if we say fateful – circumstances surrounding the Wadi al-Hujair conference, held 102 years ago, are just the same, as the upcoming elections will definitely shape the identity of this country, especially in the era of normalisation. No one can deny that those rejected and resisted colonialism for the sake of one free, independent homeland, with an Arab identity, that does not accept any foreign guardianship.

A decade later, the resistance is challenging all those old and new colonisers, restoring the glories of Wadi al-Hujair that humiliated the Merkava tanks in July 2006.

The resistance in Jabal Amel since the time of Abu Dhar al-Ghafari is referred to as “a fight for the sake of faith and a rejection of injustice.” Besides, the A’amelis were present with their full strength, elites and peasants, to confront the oppression of both the Ottoman and French, despite attempts to stifle and terrorise them by brutal massacres, liquidations and public executions to silence their honest voice demanding freedom and independence. The mainstay of this glorious movement was Sayyad Abd al-Hussein Sharaf al-Din, who bore all burdens and cruelty of displacement, arrest and exile.

Jabal Amel (aka Mount Galilee, Bishara, Bisharatin, etc.) is the area that is called today South Lebanon on the borders in northern occupied Palestine; it was annexed to Lebanon after the establishment of the State of Greater Lebanon in 1920 AD. The name Jabal Amel refers to the tribe of Bani Amilah Al-Saba’a, which migrated from Yemen.

Following the issuance of the ominous Balfour Declaration, the birth of the Zionist settlement scheme, and the recognition that “Great Syria became French by force of arms”, the revolution had to ignite and conferences to be held. Hence, Sayyed Hussein Sharaf al-Din cried, “O noble knights” on 24 April 1920, and led the revolutionaries of Jabal Amel against French colonialism and the division of the Arab world through the shameful Sykes-Picot Agreement, and to confront those who monopolised Lebanon and appointed themselves as to its only guardians.
Sayyed Sharaf al-Din addressed the crowd, “The Christians are your brothers in the name of God, the homeland, and destiny. Love for them what you love for yourselves, and protect their lives and money, just as you protect your lives and your money by thwarting the conspiracy, quelling sedition, and applying the teachings of your religion and the Sunnah of your Prophet.”

His words were resounding among the resistance fighters, who stood still in defense of a national foundational project that would bear fruit over the decades.

The French colonialism spared no efforts at that time but to divide the Lebanese. On 14 January 1919, a man commissioned by the French tried to assassinate Sayyad Sharaf al-Din because of his rigorous stance before the King-Crane Commission and his rejection of the mandate.

The King-Crane Commission was established in the aftermath of the Paris Peace Conference in 1919, on the proposal of US President Woodrow Wilson based on the principle of ‘the consent of the peoples and the right of self-determination.’

Wilson sent an impartial commission to survey the views of the various ethnic and religious groups in the so-called ‘Near East Countries’ regarding the way they wished to rule in their country after the fall of the Ottoman Empire.
Sayyed Hussein Sharaf al-Din and revolutionaries, such as Sayyed Mohsen Al-Amin, Sadiq Hamza Al-Faour, and Adham Khanjar, rose against the malicious intentions of the colonialists, which were fomenting sedition and intrigue between Muslims and Christians.

The repercussions of the conference were not local, but regional and international, and it received wide public attention; it was seen as a unitary and liberation project that has been echoing to this day.

Sayyed Sharaf al-Din himself explains his goal by saying, “Either indissoluble pride or merciless disgrace. Either free life or humiliation that wastes one’s humanity in his mud. Either independence without tutelage, or enslavement, in which we are like orphans at a feast of the miscreants.”

He adds in the conference’s statement, “If you renounce personal desires, and give preference to the honour of the cause, then we are going to be in an indefatigable guard, and your homeland will be in a shield that will not be crushed. Nonetheless, if you are overcome by your desires, then you will be a ‘mere draught for the drinker and opportunity for the lustful [were you]. A flickering flam’ before the fierce enemy and the severity of temptation and the vicissitudes of time. Shall I tell you something that if you did it, you would win? Let the intruder usurper miss the opportunity through your composure, and put down its strife with your beautiful patience, for by God it does not prepare one group against another except to provoke sectarian strife and ignite civil war, even if its claim was true, and ita dream was fulfilled, it settles in the country under the pretext of protecting minorities.”

Sayyed Sharaf al-Din exhorted the love of the homeland and harmony among compatriots of different affiliations, warning against slipping into sedition. He held that a homeland can only settle down through Islamic unity between Sunnis and Shiites and national unity between Muslims and Christians, in addition to his rejection of foreign guardianship, and his demand for ample independence. The cleric also showed his followers, some of whom did not want the method of resistance to confront the occupation, that resistance is the only way to freedom, and which alone shields Lebanon.

His Eminence says, “Verily, after this conference, Jabal Amel is between two matters, either a glory that does not diminish, and whose strength does not wane or a humiliation with which the planets of happiness stagger and the canopies of glory undermine.”

After the conferees swore to freedom and unity, the conference came out with unanimous recommendations in favor of unity and anti-French colonialism, and they decided “to join the Syrian unity, to proclaim Faisal as King of Syria, and to refuse to enter under the protection or mandate of the French.”

The French realised the danger, so they invaded with their vehicles the town of Sayyed Sharaf al-Din, burned his house, looted his library, pursued and arrested a large number of his followers, tightened the noose on the region, and caused strife between Christians and Muslims. The campaign to chase the revolutionaries continued in Tyre and the Houla plain. The heroes of the revolution were later martyred, and their legacy remains immortal today.

0 thoughts on “102 Years after the Hujair Conference: When the A’amelis voted for the option of resistance”