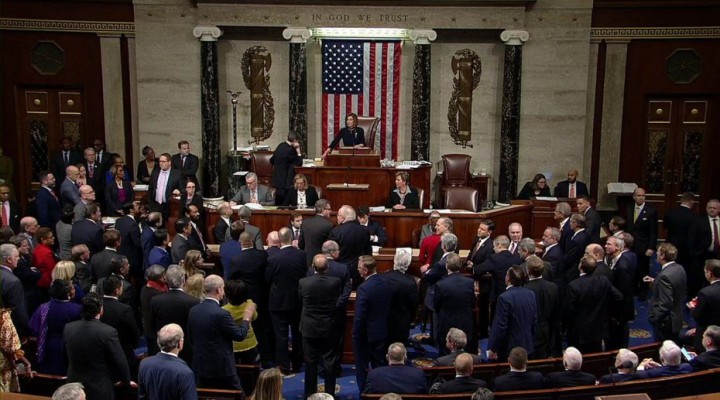 The compulsion on the part of the Democrats to bring down Trump has brought about a shift in their foreign policy, placing the neocons back in charge.

One of the more interesting aspects of the nauseating impeachment trial in the Senate was the repeated vilification of Russia and its President Vladimir Putin. To hate Russia has become dogma on both sides of the political aisle, in part because no politician has really wanted to confront the lesson of the 2016 election, which was that most Americans think that the federal government is basically incompetent and staffed by career politicians like Nancy Pelosi and Mitch McConnell who should return back home and get real jobs. Worse still, it is useless, and much like the one trick pony the only thing it can do is steal money from the taxpayers and waste it on various types of self-gratification that only politicians can appreciate. That means that the United States is engaged is fighting multiple wars against make-believe enemies while the country’s infrastructure rots and a host of officially certified grievance groups control the public space. It sure doesn’t look like Kansas anymore.

The fact that opinion polls in Europe suggest that many Europeans would rather have Vladimir Putin than their own hopelessly corrupt leaders is suggestive. One can buy a whole range of favorable t-shirts featuring Vladimir Putin on Ebay, also suggesting that most Americans find the official Russophobia narrative both mysterious and faintly amusing. They may not really be into the expressed desire of the huddled masses in D.C. to go to war to bring true U.S. style democracy to the un-enlightened.

One also must wonder if the Democrats are reading the tea leaves correctly. If they think that a slogan like “Honest Joe Biden will keep us safe from Moscow” will be a winner in 2020 they might again be missing the bigger picture. Since the focus on Trump’s decidedly erratic behavior will inevitably die down after the impeachment trial is completed, the Democrats will have to come up with something compelling if they really want to win the presidency and it sure won’t be the largely fictionalized Russian threat.

Nevertheless, someone should tell Congressman Adam Schiff, who chairs the House Intelligence Committee, to shut up as he is becoming an international embarrassment. His “closing arguments” speeches last week were respectively two-and-a-half hours and ninety minutes long and were inevitably praised by the mainstream media as “magisterial,” “powerful,” and “impressive.” The Washington Post’s resident Zionist extremist Jennifer Rubin labeled it “a grand slam” while legal analyst Jeffrey Toobin called it “dazzling.” Gail Collins of the New York Times dubbed it “a great job” and added that Schiff is now “a rock star.” Daily Beast enthused that the remarks “will go down in history” and progressive activist Ryan Knight called it “a closing statement for the ages.” Hollywood was also on board with actress Debra Messing tweeting “I am in tears. Thank you Chairman Schiff for fighting for our country.”

Actually, a better adjective would have been “scary” and not merely due to its elaboration of the alleged high crimes and misdemeanors committed by President Trump, much of which was undeniably true even if not necessarily impeachable. It was scary because it was a warmongers speech, full of allusions to Russia, to Moscow’s “interference” in 2016, and to the ridiculous proposition that if Trump were to be defeated in 2020 he might not concede and Russia could even intervene militarily in the United States in support of its puppet. Schiff insisted that Trump must be removed now to “assure the integrity” of the 2020 election. He elaborated somewhat ambiguously that “The president’s misconduct cannot be decided at the ballot box, for we cannot be assured that the vote will be fairly won.”

Schiff also unleashed one of the most time honored but completely lame excuses for going to war, claiming that military assistance to Ukraine that had been delayed by Trump was essential for U.S. national security. He said “As one witness put it during our impeachment inquiry, the United States aids Ukraine and her people so that we can fight Russia over there, and we don’t have to fight Russia here.”

Schiff, a lawyer who has never had to put his life on the line for anything and whose son sports a MOSSAD t-shirt, is one of those sunshine soldiers who finds it quite acceptable if someone else does the dying. Journalist Max Blumenthal observed that “Liberals used to mock Bush supporters when they used this jingoistic line during the war on Iraq. Now they deploy it to justify an imperialist proxy war against a nuclear power.” Aaron Mate at The Nation added that “For all the talk about Russia undermining faith in U.S. elections, how about Russiagaters like Schiff fear-mongering w/ hysterics like this? Let’s assume Ukraine did what Trump wanted: announce a probe of Burisma. Would that delegitimize a 2020 U.S. election? This is a joke.”

Over at Antiwar Daniel Lazare explains how the Wednesday speech was “a fear-mongering, sword-rattling harangue that will not only raise tensions with Russia for no good reason, but sends a chilling message to [Democratic Party] dissidents at home that if they deviate from Russiagate orthodoxy by one iota, they’ll be driven from the fold.”

The orthodoxy that Lazare was writing about includes the established Nancy Pelosi/Chuck Schumer narrative that Russia invaded “poor innocent Ukraine” in 2014, that it interfered in the 2016 election to defeat Hillary Clinton, and that it is currently trying to smear Joe Biden. One might add to that the growing consensus that Russia can and will interfere again in 2020 to help Trump. Absent from the narrative is the part how the U.S. intervened in Ukraine first to remove its government and the fact that there is something very unsavory about Joe Biden’s son taking a high-paying sinecure board position from a notably corrupt Ukrainian oligarch while his father was Vice President and allegedly directing U.S. assistance to a Ukrainian anti-corruption effort.

On Wednesday, Schiff maintained that “Russia is not a threat … to Eastern Europe alone. Ukraine has become the de facto proving ground for just the types of hybrid warfare that the twenty-first century will become defined by: cyberattacks, disinformation campaigns, efforts to undermine the legitimacy of state institutions, whether that is voting systems or financial markets. The Kremlin showed boldly in 2016 that with the malign skills it honed in Ukraine, they would not stay in Ukraine. Instead, Russia employed them here to attack our institutions, and they will do so again.” Not surprisingly, if one substitutes the “United States” for “Russia” and “Kremlin” and changes “Ukraine” to Iran or Venezuela, the Schiff comment actually becomes much more credible.

The compulsion on the part of the Democrats to bring down Trump to avoid having to deal with their own failings has brought about a shift in their established foreign policy, placing the neocons and their friends back in charge. For Schiff, who has enthusiastically supported every failed American military effort since 9/11, today’s Russia is the Soviet Union reborn, and don’t you forget it pardner! Newsweek is meanwhile reporting that the U.S. military is reading the tea leaves and is gearing up to fight the Russians. Per Schiff, Trump must be stopped as he is part of a grand Russian conspiracy to overthrow everything the United States stands for. If the Kremlin is not stopped now, it’s first major step, per Schiff, will be to “remake the map of Europe by dint of military force.”

Donald Trump’s erratic rule has certainly dismayed many of his former supporters, but the Democratic Party is offering nothing but another helping of George W. Bush/Barack Obama establishment war against the world. We Americans have had enough of that for the past nineteen years. Trump may indeed deserve to be removed based on his actions, but the argument that it is essential to do so because of Russia lurking is complete nonsense. Pretty scary that the apparent chief promoter of that point of view is someone who actually has power in the government, one Adam Schiff, head of the House of Representatives Intelligence Committee.