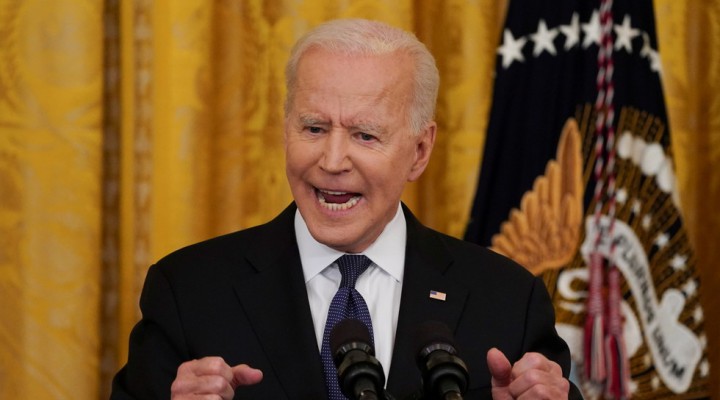 The president ordered that a politicized State Department probe into whether Covid-19 came out of a Chinese lab be halted, turning the matter over to US intelligence. Cover up? No – just a search for truth in a toxic environment.

On May 26, 2021, CNN broke a story which claimed that the Biden administration terminated a State Department investigation, launched in the fall of 2020 by former President Trump and his Secretary of State Mike Pompeo, the intent of which was to prove a controversial and disputed theory that Covid-19 originated in a lab in Wuhan, China. While the CNN report calls the State Department-run investigation “discreet”, the State Department did release a “Fact Sheet” on January 15, 2021, less than a week before President Joe Biden was sworn in, entitled “Activity at the Wuhan Institute of Virology”. This not only called for “a credible and thorough investigation” into the origins of the Covid-19 pandemic, but made clear the State Department was, in fact, taking the lead in this effort.

According to CNN, the decision to shut down the investigation was made sometime in March of 2021, after the State Department’s Bureau of Arms Control and Verification Compliance (AVC) was fully briefed on its work. Concerns were raised about both the quality and integrity of the investigation, especially when it came to the release of cherry-picked intelligence information for the exclusive purpose of blaming China by seeking to breathe new life into a theory that claims the Covid-19 virus originated not in nature, which is the consensus of the vast majority of the scientific communities worldwide, but rather from a leak at the laboratory of the Wuhan Institute of Virology.

The politicization of intelligence

While individuals involved with the probe claim it started as a “genuine attempt to investigate if China’s biological weapons program may have played a larger part in the pandemic’s emergence in Wuhan,” it devolved into something more akin to the Pentagon’s Office of Special Plans. That investigation, which took place in the lead-up to the 2003 invasion and occupation of Iraq, sought to cherry pick intelligence which sustained the notion that Iraq possessed weapons of mass destruction. According to CNN, the State Department effort focused on scientific research and information from the US intelligence community which backed the lab leak theory for the purpose of shining more light on how it could have emerged from the Wuhan lab.

In any event, while the decision to terminate Pompeo’s rogue intelligence operation was made and executed in March, the decision to disclose this to the press was made on May 26, three days after someone decided to leak sensitive information allegedly obtained from a so-called “previously undisclosed intelligence report” to the Wall Street Journal on May 23, 2021. It stated that three researchers at the Wuhan Institute of Virology (WIV) were so sick in November 2019 that they had to be hospitalized. The intelligence, said to have been sourced from a “partner nation” and of “exquisite quality”, could not, however, say what made the three researchers ill, noting that they could have been stricken by the common flu. This finding would be in keeping both with Chinese denials that any lab personnel were stricken by Covid-19, and the serological test results of all lab workers that were provided to the WHO as part of their investigation.

According to the Wall Street Journal, what gives this “new intelligence” credence is the specificity it provides, which expands upon the claims put forth in the State Department’s “Fact Sheet” from January 15, 2021, which reported that “[t]he US government has reason to believe that several researchers inside the WIV became sick in autumn 2019, before the first identified case of the outbreak, with symptoms consistent with both COVID-19 and common seasonal illnesses.”

Any intelligence professional looking at the State Department “Fact Sheet” and the information contained in the Wall Street Journal would be able to say with absolute confidence that it came from the same source which, if CNN’s reporting was correct, was cherry picked by Pompeo’s State Department team to promote the theory of a “lab leak” out of Wuhan, making the information problematic by association.

But there was an even bigger problem with the intelligence. In the intelligence community, reporting that originates from a friendly intelligence service is treated with great sensitivity, out of fear that its unauthorized release would cause that service to stop sharing reports of a sensitive nature. Moreover, the data itself is treated with circumspection, especially when it comes to briefing senior policy makers, given that the source and methods involved in its collection are not US-controlled, and as such is subject to suspicion out of concerns that an outside party or agency may be seeking to influence US policy making. In a case such as the State Department’s decision to cite foreign-sourced intelligence in a public report, permission would have been sought prior to publication, and any information which could provide hints as to the source of the intelligence would have been scrubbed clean – such as the number of infected workers and the specific timing of the hospital visit.

The reality is that the publication of this “new intelligence” does nothing to further the viability of any argument in favor of a “lab leak” theory. The US Intelligence Community’s (IC) official position regarding the origin of Covid-19, per an April 30, 2020, press release, stated that it concurred “with the wide scientific consensus that the COVID-19 virus was not manmade or genetically modified.” The IC declared that it “will continue to rigorously examine emerging information and intelligence to determine whether the outbreak began through contact with infected animals or if it was the result of an accident at a laboratory in Wuhan.”

The irony is that, by publishing the “previously undisclosed” details of the intelligence concerning the hospitalization of three workers affiliated with the Wuhan laboratory, the Wall Street Journal (and whoever leaked the information) all but guaranteed that the US IC would not be able to exploit that source of information again in any effort to further an IC-based investigation into the origins of Covid-19. The country of origin, having established that the information excised to permit the original release back in January 2021 was of such sensitivity that its release could endanger the source, would now be extremely reticent to open the source up to renewed risk by cooperating with the US – if indeed the source still existed after the leak.

But even if the source had not been compromised in such an egregious fashion, the fact remains that the intelligence analysts responsible for assessing its value had already determined that it was of little practical use – void of any specificity as to what specific illness had stricken the three workers in question (even the State Department “Fact Sheet” notes that it could have been a simple case of “common seasonal illnesses”), and in the face of the Chinese serological data provided to the WHO that directly refutes any suggestion of a Covid-19 infection among laboratory staff, the intelligence did nothing to give credence to the theory of a “lab leak.”

The US IC conclusion was reached well before the decision was made by the Mike Pompeo-run State Department to publish the intelligence in the January 2021 “Fact Sheet”. Indeed, the State Department action was of a purely political nature, designed to shape public perception and tie the hands of a Biden administration which might be more inclined to follow the analysis of the US IC, and not the cherry-picked conclusions of a secretary of state gone rogue.

The decision to leak the full extent of the intelligence underpinning the “Fact Sheet” appears to have been made after a briefing by the Director of National Intelligence, Avril Haines, given to Congress on April 14, 2021. She stated, “It is absolutely accurate the intelligence community does not know exactly where, when, or how Covid-19 virus was transmitted initially,” noting that the community had “coalesced around two alternative theories”. One being that the virus “emerged naturally from human contact with infected animals,” the other that “it was a laboratory accident.” She did not, however, say anything which contradicted the conclusions published in the April 2020 press release which rejected the laboratory accident scenario.

While no one has taken responsibility for the leaks, obvious candidates include Republican Representatives or their staff serving on the House Intelligence Committee. On May 19, 2021, the committee’s ranking member, Devin Nunes, released a report which appeared to be lifted directly from the State Department’s January 15, 2021 “Fact Sheet”, highlighting “significant circumstantial evidence” which raised “serious concerns that the COVID-19 outbreak may have been a leak from the Wuhan Institute of Virology.” This “circumstantial evidence” appears to be the intelligence concerning the three sick lab workers back in November 2019. The goal in releasing this report seems to be the same as in leaking the information to both CNN and the Wall Street Journal – to generate domestic political pressure on the Biden administration to revive the discontinued Pompeo investigation.

Faced with this obvious effort to politicize intelligence for the purpose of obtaining an outcome not reflective of the facts, President Biden responded by upping the ante – on May 27, 2021, he directed his Director of National Intelligence to launch an inquiry into the origins of the Covid-19 outbreak which would be delivered to him within 90 days. A spokesperson for the Office of the Director of National Intelligence, in a statement issued after President Biden’s announcement regarding the new inquiry, echoed the April 14, 2021, testimony of Director Avril Haines about the existence of two schools of thought regarding the origins of the Covid-19 virus, those being natural occurrence or a laboratory accident, before mirroring the statement made by the US IC in April 2020, declaring “[t]he intelligence community continues to examine all evidence, consider different perspectives and aggressively collect and analyze new information to identify the virus’s origin.”

In short, Biden, to divert attention away from a deliberate attempt by House Republicans to politicize intelligence in order to paint China as the party solely responsible for the Covid-19 pandemic, has ordered his Director of National Intelligence to investigate an issue about which the US IC has already made up its mind. Haines will direct her officers to scour their sources for new information or, lacking that, take a new look at existing information to see if there was anything missed during previous analytical exercises.

Odds are that there is no new source of intelligence, no “magic bullet” to compel a radical departure from the fact-based conclusions that the US IC has already reached regarding the origin of Covid-19 – namely that it most likely did not come from a laboratory. If there were, it would have already been leaked to the press, and the best the press currently has is the old intelligence about three sick workers back in November 2019, which is nothing. The “blame China” crew has shot its bolt, and Biden has called their bluff.

COVID as a Bioweapon, Hard Questions from Behind Closed Doors

Where Did the “Covid Pandemic” Come From and What Is Its Purpose?

Covid-19 : failure of the Western approach

The Fake Covid “Pandemic” Is the Excuse for Concentration Camps