HOME / WORLD / I twice voted for Donald Trump, but his seditious behavior means he will go down in history as the worst American president EVER 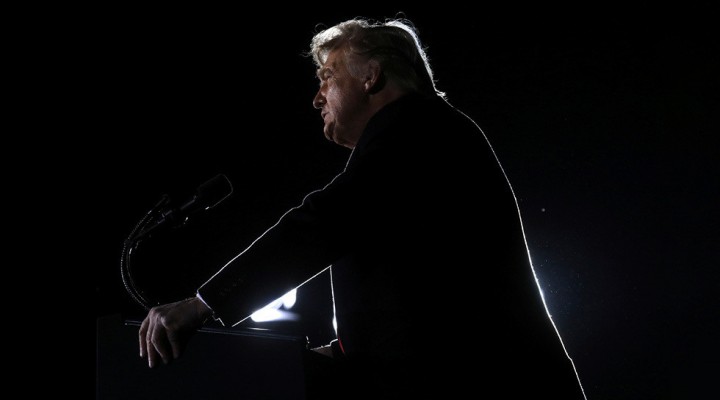 While Democrats call for Trump to be removed from office, the best course of action is to let him finish his term as little more than spoiled goods, the only sitting president who actively conspired against his own government.

In the interest of full disclosure, I supported Donald Trump’s candidacy in 2016, and again in 2020. This was not because I bought into his ‘Make America Great Again’ nonsense. In fact, I was highly critical of candidate Trump prior to his winning the Republican Party nomination; following Trump’s criticism of John McCain for being taken prisoner in Vietnam, for example, I wrote that “Donald Trump has never been a serious candidate for president,” and that his “presence among the ranks of Republican presidential hopefuls is more a reflection of a certain segment of America’s infatuation with the baser aspects of reality television than any viability as a contender for office.”

When he lambasted Judge Gonzolo Curiel’s qualifications because he was Hispanic, I condemned his actions as “dangerous, and insulting to the history of the country Trump says he wants to make great again.” I supported Trump because, in my mind, the alternatives – Hillary Clinton and Joe Biden – were much worse.

Trump won in 2016; in 2020, he lost. As a result, at 12 noon on January 20, 2021, Biden will be sworn in as the 46th President of the United States, ending four years of an experiment in populist politics headed by Trump that was, for better or for worse, unique in American history. In this age of instant gratification and 24-hour news cycles, there will be a temptation among many to try and immediately relegate Trump to the bottom of the pantheon of presidents, rated alongside those who came before him. Presidents, however, are like a fine wine, and often need the passage of time before their full potential is realized.

Trump has always been a polarizing figure, generating extreme emotions on both ends of the spectrum – you either love him or hate him. His reality television persona, when combined with the brashness of a risk-taking New York City realtor, resulted in an “in your face” style that was the antithesis of the copesetic blandness Americans had come to expect from their mainstream politicians. As such, rating Trump as a president requires a different standard than used with his establishment predecessors, one that strips away the artifice of diplomacy and tact, and instead focuses purely on results. When judged in this light, Trump is neither the best nor the worst president in American history, but rather residing somewhere in the middle.

This, however, is not how Trump will be, or should be, judged. Instead, he will go down in history as the worst American president, ever, because of what he said and did on January 6, 2021. His conduct in inciting a crowd of thousands of supporters to storm and occupy the US Capitol while a joint session of Congress, presided over by his Vice President Mike Pence, counted the votes of the Electoral College that would formally recognize Biden as the president-elect, has made Trump unique in American history – he is the only sitting president who actively conspired against his own government, in violation of the very Constitution he swore to uphold and defend.

While the president may escape being criminally charged for sedition, his actions were seditious in nature, with the cause-and-effect relationship between his exhortations and the actions of those who violently occupied the Capitol building clear to all. Even Trump himself eventually realized he had gone too far – in a videotaped message, delivered via television yesterday evening, the president sought to ease the passions he had enraged. “I am outraged by the violence, lawlessness, and mayhem,” Trump said. “America is and must always be a nation of law and order,” he added, noting that “those who engaged in the acts violence and destruction…do not represent our country.”

Perhaps more importantly, Trump finally acknowledged that “[a] new administration will be inaugurated on January 20,” declaring that “[my] focus now turns to ensuring a smooth, orderly and seamless transition of power.”

The president’s message cannot, and will not, absolve him of his conduct on January 6. It will, however, most likely end up sparing him from the ignominy of being prematurely removed from office. Concern about his mental fitness to govern has driven the leadership of the congressional Democrats to demand that Vice President Pence invoke the 25th Amendment to remove Trump from office or else face a second impeachment proceeding. The conciliatory tone and language of the president’s address appeared to have mollified Pence, without whom a 25th Amendment proceeding cannot take place. Moreover, Biden has made it clear that while any effort to remove Trump from office are the sole prerogatives of Pence, Trump’s cabinet and Congress, while the energies of the Democratic Party are best utilized moving forward rather than looking back.

Over the course of the next twelve days, all eyes will be on Trump as the American people and those they elected to represent them in higher office try to wrap their minds around just precisely what transpired on Wednesday, and what it means for the future of American democracy. While President Trump has rightly been excoriated because of his actions, the reality is that the US remains a nation scarred by deep partisan divisions. A government’s legitimacy is drawn from the consent of the governed, and as things currently stand, nearly 50 percent of Americans remain vigorously opposed to the idea of Biden being their president.

As important as it is that Trump be penalized for betraying his oath of office, it is even more important that America begins the long, difficult process of healing as a nation. This is best accomplished by allowing Trump to go gently into the night as a man with no political future, rather than turning him into a martyr capable of rallying millions of supporters who remain loyal to his tainted cause and who will actively work to undermine a Biden administration.

The Opening Act Of The New “War On Domestic Terror”

0 thoughts on “I twice voted for Donald Trump, but his seditious behavior means he will go down in history as the worst American president EVER”