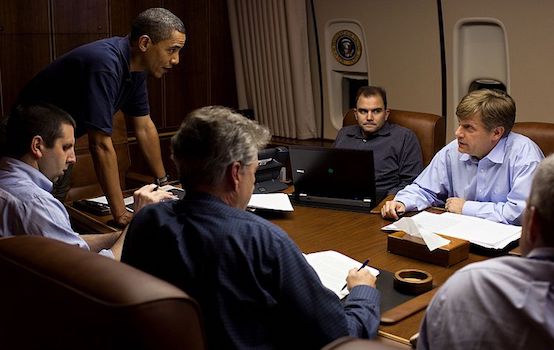 To get a sense of why Putin meddled in our elections one need go no further than the Obama administration’s hijinks.

Post-Mueller report insanity has gripped the nation. In between Presidential proclamations that the report provides proof of his exoneration, and Democratic declarations that the report contains evidence of crimes deserving of impeachment, lies the reality of U.S.-Russian relations, and the fact that these two nations live in a world where their combined nuclear arsenals can eliminate humanity as we know it.

While President Trump struggles to gain traction for his campaign promise to better relations, his political opponents are stuck in a time warp that has them reliving the 2016 Presidential election and its allegations of Russian interference.

Americans have every right to be concerned about the prospects of Russian interference in elections which serve as the foundation of American democracy. However, in seeking to find a solution to the problems that plague the relationship, it is imperative that the American people understand how we got to where we are today. You can’t solve a problem without first accurately defining the problem, and as such any examination of the Genesis of the he-said/she-said aspects of alleged Russian interference in 2016 must take into account the fact that, if anything, the Russians were reacting to a lengthy history of U.S. interference in their internal affairs since the end of the Soviet Union in 1991.

One of the key players in this interference was Michael McFaul, a Stanford professor who, while serving as the U.S. Ambassador to Russia from 2012 to 2014, oversaw a policy of engagement with Moscow on behalf of the Obama administration and, when that policy failed, facilitated U.S. interference in the 2012 Russian Presidential election in an effort to keep Vladimir Putin out of office.

In October 2006 Michael McFaul was approached by people close to Barack Obama to join a circle of experts who were advising the Illinois Senator on foreign policy issues in preparation for an anticipated presidential bid in 2008.

McFaul, who at that time was working as a professor in political science at Stanford University, agreed, and quickly became Obama’s go-to expert on Russian issues. Following the 2008 U.S. presidential election, Obama picked McFaul as the special assistant to the president and senior director of Russia and Eurasia affairs at the National Security Council.

One of McFaul’s first tasks was to formulate and implement a “reset” in U.S.-Russian relations. There was widespread acknowledgement among Russia observers that, as of 2008, relations between Washington, D.C. and Moscow were at an all-time post-Cold War low. The goal of a “reset”, McFaul believed, was to “find cooperation with Russia on common interests” and “develop a multi-dimensional relationship with Russia” inclusive of “societal contacts” that would be pursued through a policy of “active engagement.”

For McFaul, however, the Russian “reset” wasn’t about U.S.-Russian relations as much as it was about building strong ties between the Obama administration and Dmitry Medvedev, the former prime minister who had assumed the Russian presidency in 2008 from Vladimir Putin. Putin, who had succeeded Russian President Boris Yeltsin in 2000, had finished out his second term (the Russian Constitution forbade a president from serving more than two successive terms.) Putin became the prime minister, effectively trading places with Medvedev.

Obama’s secretary of state at the time, Hillary Clinton, was scheduled to meet with her Russian counterpart, Foreign Minister Sergei Lavrov, in Geneva in March 2009. McFaul advised that it would be a good idea to publicly draw attention to the “reset,” and a State Department staffer came up with the idea of presenting a symbolic “button” that would be symbolic of the occasion. The staffer approached McFaul who, as the resident Russian expert in the NSC, provided the translation for the word “reset” (peregruzka) and the correct spelling. When Clinton presented the “reset button” to Lavrov, however, he pointed out that peregruzka did not mean “reset”, but rather “overload”, referring to putting too much power through an electrical system, leading to blown fuses, or even a fire.

While the embarrassing gaffe did not sink U.S.-Russian relations (this would happen on its own volition), it did underscore a level of amateurishness at the highest levels of American policy making by someone who was purported to be an expert on all things Russian.

McFaul’s academic credentials and training as a Russian specialist are impressive. McFaul graduated from Stanford in 1986 with a B.A. in International Relations and Slavic Languages, and went on to get his master’s degree, also from Stanford, in Russian and East European Studies, before heading off to Oxford, England, where he pursued his Doctorate in International Relations as a Rhodes Scholar. McFaul returned to the Soviet Union in 1990 as a visiting scholar at Moscow State University, where he finished up his doctoral dissertation (he was awarded his Ph.D. the next year.)

It was during his time as a visiting scholar that McFaul began to blur the line between pure academia and policy activist. In 1990, McFaul signed on as a consultant with the National Democratic Institute (NDI), self-described as “a nonprofit, nonpartisan, nongovernmental organization that has supported democratic institutions and practices in every region of the world.”

The NDI was founded in 1983 as an action arm of the National Endowment for Democracy (NEC), created by Congress under the eponymously named National Endowment for Democracy Act. The congressional action was in response to an executive decision on the part of President Ronald Reagan, promulgated under National Security Decision Directive-77, to promote so-called “public diplomacy” operations in furtherance of U.S. national security interests. McFaul dual-hatted as a visiting scholar and as NDI’s official Field Representative in Moscow.

As the NDI’s representative in Moscow, McFaul actively supported “Democratic Russia,” a coalition of Russian politicians led by Boris Yeltsin, the president of the Russian Federation, even though the official U.S. policy at the time was to support Mikhail Gorbachev, the president of the Soviet Union. McFaul likened Yeltsin to the “catalyst for the Cold War’s end.” While recognizing Yeltsin as “the unquestioned leader of Russia’s anti-Communist movement,” McFaul noted that Yeltsin’s embrace of Democratic Russia was more a byproduct of the realization that such an alliance was needed to defeat the Soviet regime, rather than a genuine embrace of liberal ideas.

This realization seems absent, however, from McFaul’s later apologia about the decade of corrupt, ineffective governance that defined Yeltsin’s time as the president of Russia.

McFaul had become enamored with the concept of Russian “democracy” but he could not define it with any precision. In his 2001 book, Russia’s Unfinished Revolution: Political Change from Gorbachev to Putin, McFaul throws the term “democracy” around freely, only acknowledging (in a footnote) that, in the context of Russia, it may not exist. The reality was that Yeltsin, far from an idealistic paragon of democratic virtue, was little more than the hand-picked puppet of the United States.

In 1999, Yeltsin, his health ravaged by alcohol and his legacy haunted by a decade of corruption and mismanagement, stepped aside (“peacefully and constitutionally,” according to McFaul) in favor of his hand-picked successor, Vladimir Putin. Within a period of less than two years (Putin assumed power on New Year’s Eve in 2000, and Russia’s Unfinished Revolution was released in 2001), McFaul declared that the former KGB officer had “inflicted considerable damage to democratic institutions” in Russia. There were, however, no genuine democratic institutions in Russia to inflict damage upon when Yeltsin stepped aside—Russia’s first president had seen to that by destroying the Russian Parliament in 1993 and rigging an election (with extensive American support) in 1996. It was everything Putin could do upon his accession to the presidency right the Russian ship of state, let alone reinvent something (Russian democracy) that had never existed to begin with.

McFaul’s problem with Putin centered not on what he had done as president as much as the fact that he was president. There was an inherent inconsistency between McFaul’s theory of Russian “democracy” and the reality of Putin. Putin viewed the collapse of the Soviet Union as “a major geopolitical disaster of the century.” He had stood next to Yeltsin as he debased himself and Russia in conversations with President Bill Clinton. If one thing was for certain, Putin would never allow himself to behave in a similar manner.

McFaul’s “reset” policy was intended to reassert American influence into the Russian body politic in a post-Putin Russia. As such, when Putin announced in 2011 that he would again run for president, McFaul’s “reset” policy collapsed. Under the “reset,” the Obama administration, at McFaul’s urging, provided funding through the auspices of the U.S. Agency for International Development, the NED, NDI, and other non-governmental organizations to Russian civil groups that had coalesced into a political opposition to Putin’s 2012 presidential ambition. McFaul also encouraged Secretary of State Clinton to speak out in support of the Russian opposition. “We are supportive of the rights and aspirations of the Russian people,” Clinton stated in December 2011, “to be able to make progress and realize a better future for themselves.”

Putin and the Russian government responded by accusing Clinton of interfering in the domestic political affairs of Russia. When McFaul was appointed by Obama to serve as the U.S. ambassador to Russia in late 2011, one of his first actions was to invite the leaders of the various Russian opposition groups to the U.S. embassy to meet with him. After Putin won his bid for election in March 2012, he immediately set about to ban foreign funding for Russian non-governmental organizations. USAID, the NED, NDI, and other organizations used to channelling U.S. money to Russian political entities were evicted from Russia.

McFaul, whose entire ambassadorial persona was built around the kind of societal engagement produced by these NGOs, never recovered. In February 2014, McFaul announced his resignation as U.S. ambassador, declaring that it was time for him to return to Stanford and resume his previous life of academia.

Since leaving Moscow, McFaul has become one of the leading critics of Putin, writing prolifically on the topic, and frequently appearing as a talking head on television. Putin’s Russia has provided McFaul with plenty of material to work with, including the annexation of Crimea in 2014, the military intervention in Syria in 2015, and the alleged meddling in the 2016 U.S. presidential election.

A staunch supporter of Clinton, McFaul has turned his sights on Trump, strongly criticizing Trump’s own efforts for a new “reset” with Russia as misguided. By McFaul’s telling, the abysmal state of U.S.-Russian relations is the fault of Putin and Putin alone, and Trump’s efforts at normalizing relations only plays into Putin’s hands.

But it was McFaul’s role in the U.S. interference in the Russian 2012 election that put in motion everything that followed. Perception makes its own reality, and the Russian perception is that McFaul and the Obama administration purposefully put their thumb on the scale of Russia’s presidential election to keep Putin from winning. McFaul has been banned from traveling to Russia, and in 2018 Putin approached Trump for permission to have Russian intelligence officers question McFaul about alleged illegal activities conducted while he was ambassador. While the Russian claims are unsubstantiated allegations, and their request facially absurd, the fact remains that when it comes to apportioning blame for the sorry state of U.S.-Russian relations today, one need look no further than Michael McFaul and his decades-long effort to create Russian “democracy” from whole cloth as laying the foundation for failure.

For McFaul to today condemn the Russians for their alleged interference in the 2016 U.S. Presidential election is like an arsonist seeking to assign blame for a blaze sparked by the embers of his own handiwork.