Former Hostage of Al Qaeda in Syria Rejects Jolani’s PBS Makeover: “They Are Lunatics with Guns” 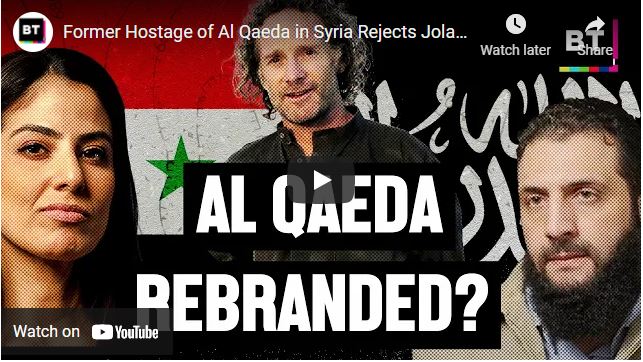 PBS Frontline released a long anticipated documentary featuring Abu Mohammad al-Jolani, formerly the head of Jabhat Al Nusra, the al Qaeda affiliate in Syria, which is now called Hayat Tahrir al Sham, or HTS. Jolani is attempting to rebrand himself and his organization in an effort to be removed from the US terrorism list so he can be legitimized as the leader of Idlib in northern Syria.

Has Jolani and his group’s allegiance to al Qaeda really changed? Or is this a sinister charm offensive to maintain and even gain more power with the backing of the West in order to continue his campaign to collapse and takeover Syria and impose an Islamic State no different than ISIS? Did PBS whitewash Jolani? And why do journalists who should know by now the jihadist reality of the opposition to the Syrian government continue to treat them as glorious revolutionaries?

To discuss this and more, Rania Khalek is joined by Theo Padnos, who was held as a hostage of Jabhat Al Nusra for two years, enduring day after day of torture and getting unique insight into the group. He’s also the author of the recently published book Blindfold: A Memoir of Capture, Torture, and Enlightenment.

Did the BBC use a Nour Al Din Zinki supporter as researcher for Mayday series?

0 thoughts on “Former Hostage of Al Qaeda in Syria Rejects Jolani’s PBS Makeover: “They Are Lunatics with Guns””