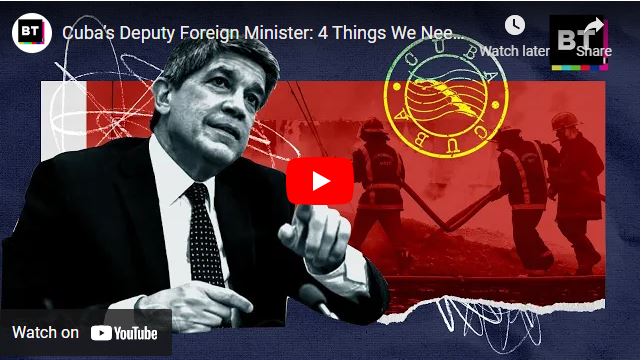 The fire in Cuba that burned for five days, after lightning set off a series of explosions, is finally under control. But 17 firefighters are listed as missing, and the fire destroyed what is likely to be millions of gallons of precious fuel that is hard for Cuba to obtain under stringent U.S. sanctions.

As the recovery phase begins, where will the country get the necessary equipment and supplies without being able to trade with the majority of countries because of the U.S. blockade? Cuban Deputy Foreign Minister Carlos Fernández de Cossío Domínguez discusses the strength and organization of the Cuban people in fighting the fire and the sanctions at once.

Surviving the Siege: Cuba and the U.S. Blockade [Dispatch from Havana]

Cuba’s economic strategy in the fight against sanctions

Top Cuban Vaccine Maker: How We Took on COVID Despite U.S. Siege

Cubans on the Street React to US Healthcare & Education Costs

Cubans Will Not Forget U.S. Treachery

One thought on “Cuba’s Deputy Foreign Minister: 4 Things We Need to Recover From Fire”