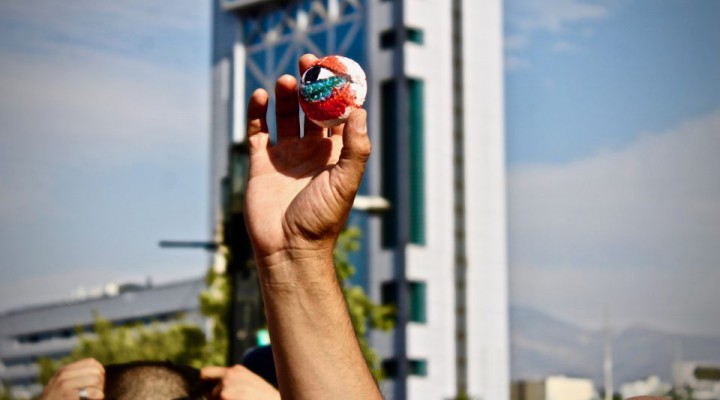 Countries all over South America are experiencing social unrest, each with its own background. However, what actually happens in these countries often differs from what Western media makes it out to be. Alan MacLeod, staff writer from MintPress News, talks with Chile Today: “The funding model of Western media makes them represent the world in a particular way.”

Earlier in Ecuador, now in Chile, Bolivia, and Colombia. For years in Venezuela. South America in 2019 is a continent full of unrest and turmoil. Every country has its own story, but according to MintPress News journalist Alan MacLeod there are parallels: the biased reporting from international media.

In Chile, the social uprising took the world by surprise. According to MacLeod, international media initially did not focus on the very thing against which Chileans rose up: the Washington Post described the protested model as an “economic miracle.”

In the first weeks of the protests, MacLeod, who writes about the coverage of corporate media in international conflicts, published “Chilean Protests: A Revolt against Neoliberalism the Media Refuses to Acknowledge.” In an interview with Chile Today, he explains.

“The size and commitment of the protesters in Chile jumped out. We saw the huge amounts of protesters who made clear the protests were about 30 years, and not 30 pesos. When you look at western media coverage, this was not coming true. They were not talking about Pinochet, nor about neoliberalism. They were presented as protests against corruption. Reuters names it riots – and who doesn’t want to stop looters and vandals?”

Apart from framing the protesters in Chile as rioters, it was mostly the absence of the neoliberalist model in mainstream media that caught the eye of MacLeod. In his mentioned article, he wrote: “There has been no mention of the word or its derivatives in any reporting on Chile from CNN, MSNBC or Fox News, for example. Meanwhile Slate amended the title of an article originally titled ‘Chile’s People Have Had Enough of Neoliberalism” so the headline read simply “Chile’s People Have Had Enough,’ removing all mention of the word from their reporting.”

During the first weeks of the social unrest, MacLeod tweeted: “19 people have been killed in Chile, and more people arrested in a week there than in 6 months of Hong Kong protests. The army is on the street shooting people. But it’s all quiet in media land since President Piñera is a US puppet.”

19 people have been killed in Chile, and more people arrested in a week there than in 6 months of Hong Kong protests. The army is on the street shooting people. But it's all quiet in media land since President Piñera is a US puppet. https://t.co/Od8mO84W4H

When asked to explain his tweet, MacLeod refers to “Manufacturing Consent: The Political Economy of the Mass Media,” written by Edward S. Herman and Noam Chomsky.

“What we see with Chile, with one week of protests, twice as many protesters were arrested than in Hong Kong, while Hong Kong got way more attention. Certain atrocities get way more attention than other ones. The countries that get attention have a certain position towards the US government. In Bolivia and Venezuela, any misdeeds get huge coverage, while other countries, more friendly to the US government, get a bigger carte blanche to do what they want, even if their misdeeds are bigger.”

Recently, the journalist concluded an investigation on CNN and The New York Times, on their reporting of protests in Haiti, Ecuador, Chile and Hong Kong. One of the findings was that “since the beginning of the Chilean protests (October 14), while the Times has covered the event 14 times and CNN 22, the two news organizations ran 59 and 92 articles on Hong Kong, respectively.”

But it’s not only the number of articles they run. In another article on Fair.org, MacLeod describes the framing of the protests such as the ones in Chile. “One might expect these popular rebellions to receive unreservedly sympathetic coverage from international media that claim to be on the side of democracy and the common people. On the contrary, corporate journalists frequently describe these uprisings as dangerous alterations of ‘law and order,’ laden with ‘violence,’ ‘chaos’ and ‘unrest.’ ”

The large differences in how Western media cover the situation in Venezuela, Hong Kong, and Bolivia in comparison with the protests in Chile has its fundament in the structure of these corporate media, MacLeod explains. “They are large structured, owned by big companies and wealthy shareholders. That funding model leads them to represent the world in a particular way. Especially when it comes to foreign policy, these media line up with their State Department. The role of any large media outlet is much less about presenting the public with facts, but more about manufacturing consent for their bosses and advertisers’ positions. They are trying to convince the public that the positions of their shareholders are good ones.”

“Media is the most powerful force in shaping society. Media is the arbiter of what we see as true, what we see as false, what we see as possible and what not, directing the national debate. Mainstream media like NYT and CNN have an important agenda-setting role in society,” MacLeod says. The role of Western media gets even more important – or controversial – when it comes to reporting on international conflicts, the writer says. “People don’t have info, they rely on media. When sources present this info in such a biased manner, we get a worked picture.”

The key question that remains is what readers should read, being aware of the not always neutral position Western media take on international conflicts. MacLeod: “Try to get as much alternative media, where the funding model is not based on corporate and banking. Try to use a wide range of sources, that way you can triangulate your view, and see where sources come from. That will help you to understand the bias from your own press. That is the best way to start self-criticizing.”