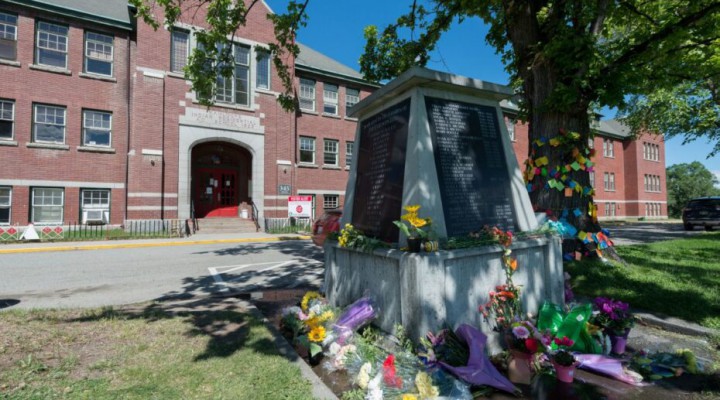 Canada’s recent discovery not only alludes to the existence of other mass graves in the country. It also sheds light on the global colonial legacy and how the military empire expanded through exploitation of indigenous lands.

The recent discovery of an indigenous mass grave in Canada bearing the remains of 215 children, is yet another reminder of colonial impunity. Kamloops Indian Residential School was the largest of many schools in Canada run by the government and the Catholic Church, which participated in the practice of separating indigenous children from their communities and families, in a bid to assimilate the younger generations to the settler-mainstream society. Over 150,000 Indigenous children were forced into these schools; over 4,100 have been reported dead or missing. From malnutrition, medical neglect, to sexual abuse, the crimes were covered up.

Canadian Prime Minister Justin Trudeau has come under criticism from indigenous leaders for failing to move beyond symbolic language of reconciliation. While the government pointed towards the Truth and Reconciliation report, Trudeau implied that the lengthy research process was partly due to the various partnerships and collaborations involved. “If it were only done by ministers, if it were only done by Ottawa, to solve these challenges, it might have been done long ago, but it would have been done wrong,” he stated.

A thriving colonial political supremacy should have been blamed for the stalling, as well as the Canadian government’s reliance on symbolic gestures as opposed to committed action to locate the missing indigenous children. To merely state, in the wake of the mass grave discovery, “We have committed as a government to be there for reconciliation, but also to be there for truth and that is an important step. So yes, we will be there to work with communities on the things they need and on the things we all need to know,” is not indicative of a government’s resolve to aid the process of Canada’s indigenous collective memory, let alone establish culpability and accountability for the historical atrocities.

Between 2007 and 2015, the Canadian Truth and Reconciliation Commission embarked upon a mission to gather testimonies and accounts pertaining to the Residential Schools which targeted indigenous children. In the span of six years, the commission gathered historical accounts from over 6,500 witnesses, while the Canadian government presented over 5 million records to the Commission. In December 2015, the Commission presented its report, along with recommendations for the government to embark upon the reconciliation process. Prominent among the recommendations was the importance of “constructive actions on addressing the ongoing legacies of colonialism.”

Yet Trudeau’s rhetoric indicated no reference to the colonial cultural genocide which established control over indigenous lands and peoples. The justification for the residential schools targeting indigenous children was rooted in white supremacy. As Canada’s first Prime Minister John A Macdonald in 1883 declared, the policy was that children should be removed from their parents and “the only way to do that would be to put them in central training industrial schools where they will acquire the habits and modes of thought of white men.”

Canada’s recent discovery not only alludes to the existence of other mass graves in the country. Additionally, it also sheds light on the global colonial legacy and how the military empire expanded through settler-colonialism and exploitation of indigenous lands – the latter hindered by the presence of the indigenous.

While the UN Human Rights Office has called for an investigation into the deaths of indigenous children in Canada, it has avoided mentioning the ramifications of colonialism. “Lack of exhaustive clarification and access to truth and redress for what happened during this dark period compounds this,” UN spokeswoman Marta Hurtado stated. At an international level, the organisation purportedly responsible for protecting human rights is still deeply entrenched in safeguarding the historical colonial legacies, hence the refusal to politicise human rights, lest the struggle for collective memory, which is common to all indigenous peoples, dent the structure which has served the colonial powers so well until now.