HOME / SOCIAL/CULTURAL / Could the Next Standing Rock Could Be Brewing in Northern Minnesota? 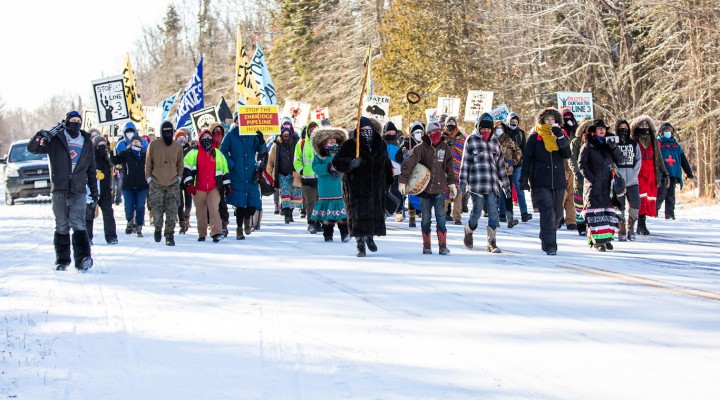 The tension is palpable in northern Minnesota where a Native-led protest movement is getting ready to square off with Enbridge over the massive Line 3 oil pipeline being built to carry crude from Canada to the Great Lakes.

MPN- Despite sub-zero winter temperatures, a conflict over a controversial new pipeline is threatening to boil over in rural Minnesota, turning it into the next Standing Rock. 22 people were arrested last week during protests in Aitkin County, around 120 miles north of Minneapolis, for trespassing against the construction of the Enbridge Line 3 pipeline. The pipeline project would carry more than 750,000 barrels of fracked Alberta tar sand oil through the United States.

Activists from environmental and indigenous groups are braving the snow to form a barrier to the construction of a pipeline that will traverse the Mississippi and pass through a number of delicate ecosystems, threatening many of the state’s famous rivers and lakes.

Other segments of the new pipeline have already been completed in Canada, North Dakota, and Wisconsin, leaving only the 337-mile Minnesotan section to be constructed. The final go-ahead for the nearly $3 billion project was given late last month. Around 2,000 people are currently employed on the Minnesotan portion, with 2,000 more expected to join soon. Yet a whole range of environmental groups, including Greenpeace USA and the Sierra Club have come out strongly against its construction. They have been joined by a number of local legislators. Reporter and photographer Emma Fiala recorded their visit to the protest encampment for MintPress, which included two individuals staying high up in the trees. 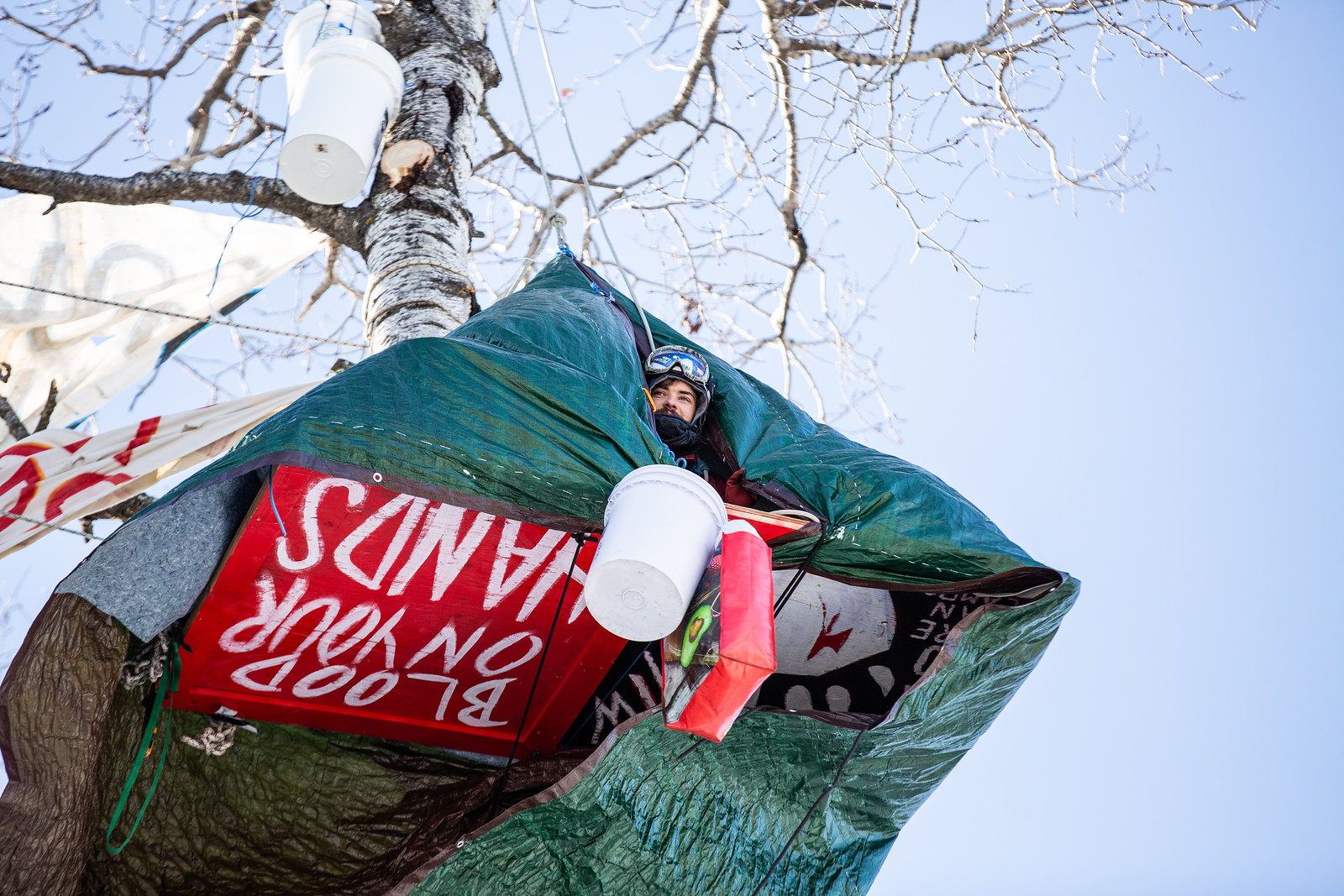 22-year-old Liam DelMain of Minneapolis looks down on a group of water protectors from the platform that they have been occupying for more than a week along the pathway of the Line 3 pipeline just north of Palisade, MN. Emma Fiala | MintPress News An officer uses a cherry picker to remove DelMain from the tree they had been occupying along the Line 3 pipeline pathway near the Mississippi River crossing north of Palisade, MN, December 14. Emma Fiala | MintPress News St. Louis County Sheriff’s officers escort DelMain in handcuffs after they were removed from a tree they had been occupying along the Line 3 pipeline pathway on December 14. Emma Fiala | MintPress News

“We have a moral imperative to do our part of mitigating the damage of the climate crisis,” said Jen McEwen, Senator-elect from District 7 in Duluth, “If this happens right now while we are at the helm of these decisions, history will not look kindly on us.”

Protest encampments have existed since 2017. However, there is a feeling that, with construction beginning, something big might be about to happen, turning Aitkin County into the next Standing Rock. That is certainly the worry of local police, who have been engaged in constant monitoring of the protesters, with documents showing they have repeatedly turned to North Dakota officials responsible for the militarized crackdown at Standing Rock for guidance.

The state of Minnesota is clearly expecting trouble and does not want to be left with a huge bill and cleanup operation like North Dakota was following the massive protests at Standing Rock. As a condition of its approval of the pipeline, the state required Enbridge to pay hundreds of thousands of dollars in expected future policing costs up front. While this might have been financially prudent, it has led to a situation where Enbridge is effectively calling the shots, working closely with law enforcement to suppress dissent. One county sheriff even admitted that the oil company had donated the tools that he used to cut loose pipeline opponents who had chained themselves to Enbridge’s equipment.

The molding of state and corporation goes further, as considerable resources have been spent on monitoring and spying on the water protectors. “When you walk in the grocery store of a town of 200 people, and there’s some guy taking a picture of you with a cellphone, that’s really obvious,” said one leader. However, others have alleged a near-constant network of surveillance, including drones and the use of informants and undercover agents posing as protesters, in what effectively amounts to a counterinsurgency operation. Members of Aitkin County Sheriff’s Department, Conservation Officers, and others respond to a group of Line 3 pipeline protesters near the Mississippi River north of Palisade, MN. Emma Fiala | MintPress News

MintPress spoke to a number of environmental groups opposing the pipeline. “Tar sands are some of the world’s worst, most carbon-intensive oil on the planet…Studies confirm that the climate impact would be that of 50 coal plants, causing upwards of $280 billion in climate damages globally. Line 3, Keystone XL, and all tar sands extraction and pipelines must be stopped immediately,” Osprey Orielle Lake, Executive Director of the Women’s Earth and Climate Action Network (WECAN) told us, adding that,

Business as usual must not and cannot continue. It is far past time for governments and financial institutions to immediately implement a managed decline off of all fossil fuels and support the already flourishing regenerative, renewable energy sector, just transition plans, and community-led climate solutions. These are the solutions we need.”

Enbridge, a Canadian energy giant employing over 11,000 people, is infamous for the 2010 spilling of close to one million barrels of oil into the Kalamazoo Creek, a mistake for which it paid the state of Michigan $75 million in damages. The new pipeline would cross the Mississippi three times, as well as 200 additional bodies of water.

“Minnesota should be worried,” Malik Russell from Stop the Money Pipeline, a coalition of 130 organizations attempting to halt Wall Street funding of environmental destruction, told MintPress. “The Tar Sands process of oil extraction is the most horrible ways of oil extraction methods on the planet. Tar Sands is a toxic and brutal method that poisons and destroys our natural environment, clean water, and the communities near it.”

Much of the resistance to the project is led by local Indigenous organizations, who argue that the pipeline violates many treaties the U.S. signed with them. The pipeline cuts through Ojibwe and Chippewa Reservations, including sacred land that the Ojibwe use to harvest wild rice. “Line 3 is yet another example, similar to the Dakota Access and Keystone XL Pipelines, where governments and corporations refuse to uphold and respect the rights and sovereignty of Indigenous peoples, refuse to listen to the public who do not support these pipelines and refuse to act in good faith to protect water and the global climate,” said Osprey Orielle Lake. “We need to put people and the planet before profit.”

Minnesota is currently enduring an intense epidemic of COVID-19, losing 92 people on Wednesday to the virus. Bringing in thousands of out-of-state workers in risks overwhelming the already strained rural state hospitals. Over 20,000 people have already been hospitalized since the pandemic began.

Activist groups have promised to continue fighting and brave the winter’s temperatures until the pipeline is shelved. But protesting the fossil fuel industry will soon become a criminal offense, turning civil disobedience into serious felonies. That is if new legislation pushed by industry groups such as the American Legislative Action Council (ALEC) is passed. Minnesota is among their test states, where some legislators, their pockets greased with oil money, are attempting to essentially criminalize protest.

“This pipeline isn’t about the so-called ‘safe’ transportation of a necessary product, it’s the final gasp of a dying industry desperately trying to perpetuate fossil fuel use in a society that knows its past time to make better choices for energy use,” said Amy Gray of the Stop the Money Pipeline Coalition.

At the protests against the Keystone XL pipeline at Standing Rock, protesters — and even journalists — were essentially treated as such. Democracy Now! host Amy Goodman was charged with rioting and faced one year in prison for covering the events. Heavily armed police officers in full riot gear arrested nearly 500 people, even using water cannons on them amid freezing conditions in the winter of 2016-2017. The process was begun under President Obama, who refused to halt the pipeline’s construction, even symbolically, during his lame duck session. Almost as soon as Donald Trump assumed office, he canceled the environmental impact assessment and the project was swiftly completed, the first oil being pumped by May 2017. Later that year, the pipeline leaked 210,000 gallons of oil in Marshall County, South Dakota.

It is clear that, for many of the activist groups opposing the project, the question of the Enbridge pipeline construction is virtually a life and death one. “This is a fight we must win if we as a nation are going to beat back an existential crisis heading our way at full speed – the climate emergency,” Russell told MintPress. Senator-elect McEwen seemed to agree; “We have a moral imperative to do our part of mitigating the damage of the climate crisis… If this happens right now while we are at the helm of these decisions, history will not look kindly on us,” she said. Protesters in Aitkin County predicted that, if construction is not halted, their numbers would swell, threatening to spark a nationwide story that could dominate the festive period.

Feature photo | Around 100 water protectors braved the frigid temperatures as they marched down Great River Road north of Palisade, MN toward the site of the Line 3 pipeline, December 14, 2020. Emma Fiala | MintPress News

0 thoughts on “Could the Next Standing Rock Could Be Brewing in Northern Minnesota?”