Protesting Israel Is a “Hate Crime” in U.S. Universities 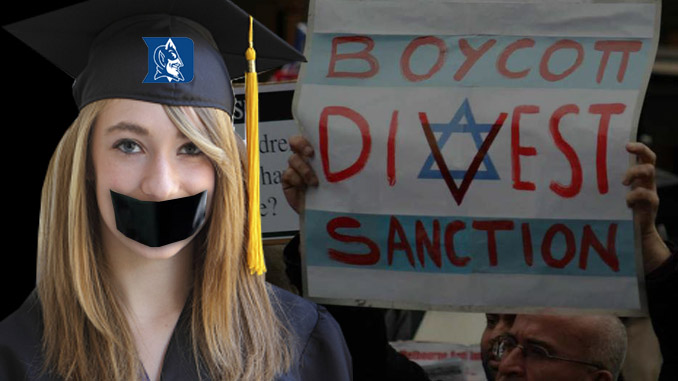 President Trump’s Education Department now says that protesting Israel is a “hate crime.” Incredibly many colleges and universities are bowing to pressure to limit activities of the Boycott, Divestment, and Sanctions movement.

The Israel lobby in the United States and its counterparts in Europe have been paying particular attention to curtailing the activities of the Boycott, Divestment, and Sanctions movement (BDS). This is because BDS, which is non-violent and based on established human rights principles, is extremely appealing to college students, who will be tomorrow’s leaders. Israel, which promotes its own largely fictional narrative about itself, is reluctant to allow any competing stories about its foundation and current activities, so it has worked hard to exclude any and all criticism of its practices on college campuses and even among students in public high schools.

Unfortunately, many colleges and universities are all too ready to compromise their principles, such as they are, whenever a representative of Israel or of Jewish groups comes calling. A popular line that has proven to be particularly effective is that Jews on campus feel threatened whenever anyone advocates for the Palestinians or Iranians, intended to convey that their civil rights are being violated.

Even if that type of allegation is actually relevant to whether or not one allows free speech and association, one wonders how violated the Palestinians and Iranians must feel when confronted by the endless stream of hostility emanating from the U.S. media and Hollywood as well as from select politicians representing both parties and the White House.

In the most recent manifestation of suppression of views critical of Israel, the federal government’s Department of Education has ordered Duke University and the University of North Carolina at Chapel Hill to reorganize the Consortium for Middle East Studies program run jointly by the two colleges based on their failure to include enough “positive” content relating to Christianity and Judaism. The demand came with a threat to suspend federal funding of Title VI Higher Education Act international studies and foreign language grants to the two schools if the curriculum is not changed.

Of course, the demands have nothing to do with Christian groups demanding inclusion and everything to do with organized Jewish pressure to present Israel in a positive light while also casting aspersions on the Jewish state’s perceived enemies in the region and also on university campuses. Anyone who has even cursory knowledge about the Middle East knows that Christians and Jews constitute only a tiny minority in the region, so the emphasis on teaching about Islam, the Arabs, and the Persians makes sense if the instruction is to have any actual relevance.

One particular event that apparently led to an earlier investigation in June launched by the Education Department consisted of a conference in March called “Conflict Over Gaza: People, Politics, and Possibilities.” A Republican congressman was outraged by the development and asked Education Secretary Betsy DeVos to investigate because the gathering was full of “radical anti-Israel bias.”

Even The New York Times acknowledged in their coverage of the story that “Betsy DeVos, the education secretary, has become increasingly aggressive in going after perceived anti-Israel bias in higher education.” Her deputy—who has served as a focal point for the effort to root out anti-Israel sentiment—is Assistant Secretary of Civil Rights Kenneth L. Marcus, who might reasonably be described as “a career pro-Israel advocate.”

Marcus is the founder and president of the Louis D. Brandeis Center for Human Rights Under Law, a foundation that he has used to exclusively defend the rights of Jewish groups and individuals against BDS and other manifestations of Palestinian pushback against the Israeli occupation of their country. He has not hesitated to call opponents anti- Semites and has worked with Jewish students to file civil rights complaints against college administrations, including schools in Wisconsin and California. In an op-ed that appeared, not surprisingly, in The Jerusalem Post, he observed that even when student complaints were rejected, they created major problems for the institutions involved. “If a university shows a failure to treat initial complaints seriously, it hurts them with donors, faculty, political leaders, and prospective students.”

Last year Marcus reopened an investigation into alleged anti-Jewish bias at Rutgers University that the Obama administration had closed after finding that the charges were baseless. Marcus indicated that the re-examination was called for, as his office in the Education Department would henceforth be using the State Department definition of anti-Semitism that includes “denying the Jewish people their right to self-determination,” making much criticism of Israel a hate crime.

In the current North Carolina-Duke case, DeVos and Marcus expressed concern over course content that had “a considerable emphasis placed on understanding the positive aspects of Islam, while there is an absolute absence of any similar focus on the positive aspects of Christianity, Judaism, or any other religion or belief system in the Middle East.” The complaint called for balancing content relating to “the historic discrimination faced by, and current circumstances of, religious minorities in the Middle East, including Christians, Jews, Baha’is, Yazidis, Kurds, Druze, and others.”

Zoha Khalili, a staff lawyer at Palestine Legal, explained how the message coming from Washington is actually quite simple and has nothing to do with balance: “They really want to send the message that if you want to criticize Israel, then the federal government is going to look very closely at your entire program and micromanage it to death. . . . [It] sends a message to Middle Eastern studies programs that their continued existence depends on their willingness to toe the government line on Israel.”

The possible consequences are very clear. If you are an educational institution that criticizes Israel in any way, shape or form, you will lose any funding you receive from the federal government. The move has nothing to do with budgetary demands or the national security of the United States or even with the efficacy of the programs that are being funded. It has everything to do with promoting Israeli interests. That a demonstrated and outspoken Israeli advocate like Marcus should be placed in a key position to decide who gets what based on his own biases is a travesty, but it is something that we should all be accustomed to by now, as there is apparently no limit to what the Trump administration is willing to do for Israel and for that monstrous country’s powerful, wealthy, and incessantly vocal supporters in the United States.

0 thoughts on “Protesting Israel Is a “Hate Crime” in U.S. Universities”