Assange Only Did What a Good Journalist Is Supposed to Do 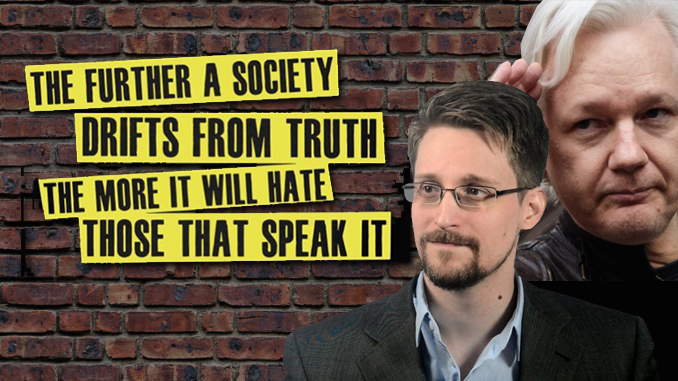 The United States prides itself on its rule of law, a legacy from British colonial times, but there is increasing evidence that equal justice under law has been replaced by something that is sometimes called “lawfare,” an Israeli invention which consists of using the legal system to punish dissent and silence critics. Three examples, all quite different, illustrate exactly how a quasi-legal process has been used against individuals that are perceived to be, rightly or wrongly, critics of America’s so-called “global war on terror,” which is still being conducted worldwide even though no one uses the expression anymore.

The global war on terror is being fought based on legislation that is unique to the United States, which, under the various editions of the Authorization for the Use of Military Force (AUMF), authorizes the United States to go after any group anywhere that has been identified by the Department of State as “terrorist.” This authority has meant in practice that even American citizens can be killed or captured by U.S. special forces in any country, which of course includes nations with which the United States is not at war—not surprisingly, as Washington is not technically at war with anyone. The AUMF has also been interpreted to permit going after entire countries or political groups designated state sponsors of terrorism.

Once presumed terrorists are captured they can be held indefinitely in special prisons, Guantanamo being the one that is best known. That is precisely the case of Pakistani citizen Khalid Sheikh Mohammed (KSM), the alleged mastermind of 9/11, who was captured in March 2002 in Rawalpindi, Pakistan. But are the claims about his involvement really true? KSM has been tortured and eventually confessed to many crimes, but he has never been tried even though rumors frequently surface in Washington that his day in court will be coming up soon. Recently, military judges asserted that he would finally be tried in January 2021 but warned that a number of conditions would have to be met first.

That KSM has never appeared in court is generally believed to be because the actual evidence against him is so thin and was obtained under torture. So he has been held in prison under orders from presidents Bush, Obama, and Trump with no end in sight, and without providing his testimony regarding events on the September day, one more piece of the 9/11 puzzle will never be revealed to the public.

As the federal government is wedded to its standard account of 9/11, it is likely that KSM will remain in prison until the day he dies, setting an example for all those who choose to question the sanctity of the 9/11 Commission Report.

Julian Assange is another notable example of how revenge against those who question standard narratives is meted out through the legal system. Assange, to be sure, has been guilty of publishing material that the United States government would prefer not to have been made public. His website, WikiLeaks, was conceived as a whistleblower site, with information provided to it by individuals who had uncovered illegal activity on the part of various governments. WikiLeaks exposed, for example, Chelsea Manning’s Iraq war crimes material and the Hillary Clinton and Democratic National Committee (DNC) emails.

In Assange’s defense, he has stated repeatedly that he is a journalist who exposes government wrongdoing, which used to be referred to as a “muckraker.” He never engaged in personally stealing government secrets and only published material that was given to him by others. In some cases, he refused to publish material that would hurt or endanger individuals.

Assange became a target of U.S. and British law enforcement in 2010. Living in London at the time, he was accused by several Swedish women of sexual assault, leading to a request from Stockholm for extradition. At the time, many believed that the accusations were without merit, and, indeed, they were eventually dropped, but Assange was about to be arrested by the British authorities after he failed to make a bail hearing set to contest the Swedish extradition request. To avoid arrest, he fled to the Ecuadorean embassy in 2012 and was granted asylum, where he eventually spent seven years, eventually confined to a small room. His health suffered.

Forced to leave by the Ecuadorean withdrawal of his asylum under U.S. pressure, he was arrested in 2019 by the British and is currently in prison, where his health continues to deteriorate. He will eventually be sent to the United States upon release in early 2020, where he will undoubtedly be convicted under the Espionage Act of 1918, a rarely invoked law that can be brought out whenever the federal government is desperate to convict someone. It was recently used in May 2015 to imprison ex-CIA officer Jeffrey Sterling even though there was no evidence that he had actually revealed classified information. The prosecution claimed that he “must have done it,” which was apparently enough for the judge and jury.

There is also a back story to Assange. He has always insisted that the information he received on the DNC emails did not come from a Russian source, one of the basic claims made that launched the years-long investigation of what became known as Russiagate. Many suspect that a DNC staffer named Seth Rich might have been the actual source, but the government and the Democratic Party have resisted any serious investigation into that possibility. If Assange is ever actually tried he might reveal the truth, but one must consider that folks who have secrets damaging to the government are either somehow silenced or even wind up dead. So Assange, who only did what a good journalist is supposed to do, will, like KSM, likely die in prison after the U.S. gets its hands on him.

And finally, there is the case of Edward Snowden, a government contractor who discovered that the NSA was spying illegally on literally millions of Americans. He went through channels to complain about what was being done, was ignored, and eventually sent his information over to several journalists, who published his claims.

Snowden knew that even though he was a whistleblower and was allegedly protected by special whistleblower legislation there was no chance that he would ever receive a fair trial in the U.S., so he fled first to China and then wound up in Russia, where he is today. He has stated that he would return to the United States to tell his story if he is guaranteed a fair trial that will enable him to use a “public interest” whistleblower defense, but no one is taking the bait. Many in Congress and even some in the media have called for his execution as a traitor. Some of us, however, regard him as a hero.

Truly the land of the free and the home of the brave has become something like a prison camp for those who fall outside the limits of acceptable behavior as defined by the government. Law is the weapon and it is wielded equally by Democrats and Republicans. Do KSM, Assange, and Snowden all have interesting tales to tell? Indeed, they do, but we the public will likely never hear them.