HOME / WORLD / A Death in Herzliya

A Death in Herzliya 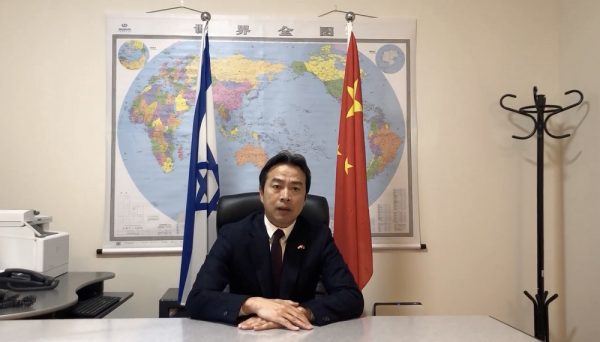 Mystery Remains About the Death of the Chinese Ambassador

On Sunday morning May 17th, China’s Ambassador to Israel, Du Wei, was found dead in bed inside his official residence in the Tel Aviv upscale suburb of Herzliya. He was 57 years old, married and the father of a son, and had been appointed to his position in February. He was reported to be in good health. His wife and son were not yet in Israel when he died.

Israel’s Foreign Ministry quickly released a report stating that he had died of natural causes, later described by the Chinese Foreign Ministry as “unspecified health problems,” which has been interpreted to probably mean a heart attack or stroke. He had been quarantined for 15 days upon arrival in Israel and his death has not in any way been attributed to the coronavirus.

Israeli police moved quickly to close access to the residence, reported to be standard procedure, and the government in Beijing indicated that it would be sending an investigative team to Tel Aviv to determine what had happened and also to return the body to China. Israel at the time required all travelers entering the country to comply with a mandatory 15 day quarantine, but the Foreign Ministry waived the requirement for the incoming Chinese officials. Du Wei was thereupon removed and returned to China. The Beijing government has not as of this date issued a report indicating its own findings regarding the untimely death.

It is to be presumed that Du in his residence had security. Overseas Embassies differ in their levels of security depending on the threat level in the country where they are located. U.S. Embassies and Consulates overseas have Marine guards in the buildings themselves, supervised by Department of State Security (DS), but an outer perimeter of security outside the building and grounds providing access to the diplomatic protected site is frequently contracted to guards that are hired locally or even by host country police. Du, as a Chinese diplomat in Israel, would not have been particularly threatened but one might reasonably assume that he had Chinese bodyguards as well as local security. So, in theory, no one should have been able to get in to injure or kill him.

Du would have likely been secure in his own residence, but there are a couple of interesting back stories that might suggest otherwise. The ambassador’s death occurred less than a week after a surprise visit to Jerusalem by U.S. Secretary of State Mike Pompeo. As one might have expected, most of the visit took place to discuss Israel’s planned annexation of much of the Palestinian West Bank, but Pompeo also took Israeli Prime Minister Benjamin Netanyahu to task for Israel’s willingness to enter into commercial agreements with China that involve major infrastructure developments as well as telecommunications. Pompeo also reiterated the increasingly shrill Trump Administration claims that Beijing must somehow be held accountable for “the deaths of hundreds of thousands of people worldwide” from the coronavirus because it had not reported the disease when it first surfaced, a contention that the Chinese dispute.

Du was no ordinary diplomat. He was very experienced, having served for thirty years in the Foreign Ministry. He had been posted to Ukraine prior to Israel and he was noted for his aggressiveness in advancing Chinese interests through investments in infrastructure and in co-production projects, seeking to undercut U.S. influence in both countries. China is currently the largest investor in Israeli infrastructure and the activity of Du and his predecessors in Israel has, to say the least, irked the Trump White House. The New York Times describes the tension between the two nominal allies as follows: “China has been investing heavily in Israel in recent years, taking stakes in hundreds of technological start-ups and acquiring a controlling interest in the dairy food-processing company Tnuva. But Israel has antagonized Washington by allowing Chinese companies to make major infrastructure investments in recent years, including in sensitive locations. A company majority-owned by the Chinese government has signed a 25-year lease to run Israel’s commercial seaport in Haifa, a frequent port of call for the United States Navy, beginning in 2021. And near Israel’s Palmachim air force base, a Hong Kong-based company, Hutchison Water International, is a finalist to build a desalination plant that Israel says will be the largest in the world. Trump administration officials have repeatedly warned Israeli officials that intelligence sharing between the two close allies could be impaired or compromised over such investments by China.”

And Pompeo as well as other Trump administration officials also have had a stronger message that they have been delivering to all of Washington’s presumed allies. Pompeo again made clear the warning to Israel: do not install equipment from Huawei – a Chinese telecom conglomerate that operates globally – in developing a new, next-generation 5G telecommunications network. Washington believes that Huawei equipment is used by Chinese intelligence to covertly access mobile phone networks through “backdoors.” Several nations, including Israel, have been warned that if they go ahead with Huawei, the U.S. might not continue sharing sensitive intelligence information.

The White House concern is in part commercial as the U.S. would like to become the lead provider of the new technology. It derives from the belief that 5G will soon serve as the backbone for all critical telecommunications and its faster download speeds mean that it will be the foundation of many new technologies, leaving the U.S. far behind in the race to develop new consumer products while also giving China the ability to both spy and interfere with America’s infrastructure.

In the event, it has been suggested that Netanyahu was polite about the China problem but did not agree to any of the limitations being imposed by Pompeo, which leads directly to the suspicion that the U.S. government, possibly working through a friendly Mossad, sought to send a message to Bibi by killing an ambassador in such a fashion as to suggest a “heart attack.” It might seem extremely unlikely that even the Trump Administration would behave so recklessly, but one might recall the assassination of Iranian Major General Qassim Soleimani in January, carried out by a feckless U.S. national security team heedless of consequences.

And there is yet another tale circulating privately among former intelligence officers, suggesting something quite different. Some believe that Du was preparing to defect to the United States, possibly because he was somehow presented with financial and other inducements that made up an offer too good to refuse. Inducing foreign diplomats to defect was a feature of the Cold War and has also taken place less frequently since that time, though it has always been unusual to involve an ambassador. The defection story, and, one might add that there is no way to confirm it, would mean that Du might have been ordered killed by his own government. Or Israel if it had made the decision to continue to seek Chinese investment and was concerned that Du would spill the beans to Washington on even more sensitive co-productions or projects.

So, the death of Du Wei remains something of a mystery. Beijing is not saying anything, Israel has done what it could to make the story go away and the United States has not bothered to comment at all. The relative silence about the dead ambassador, one might observe, is itself suspicious.

0 thoughts on “A Death in Herzliya”