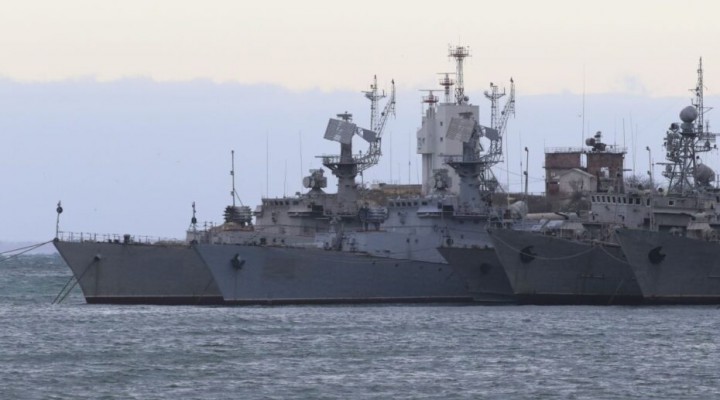 Get ready: something lethally “asymmetrical” may be about to pop up.

Neither NATO nor Russia is telling us what really happened with the Moskva, the legendary admiral ship of the Black Sea fleet.

NATO because in theory, they know. Moscow, for its part, made it clear they are not saying anything until they can be sure what happened.

One thing is certain. If the Russian Ministry of Defense finds out that NATO did it, they will let loose all the dogs from Hell on NATO, as in “asymmetrical, lethal and fast”.

On Moskva’s location: it was positioned near one of 3 drilling rigs, used for monitoring a whole sector of the Black Sea with hydrophones and NEVA-BS radar, the most westward one, BK-2 Odessa, approximately 66 km northeast from Snake Island. The whole thing was integrated in the regional monitoring systems. As in everything, literally, was monitored: ships, low flying targets, smaller echoes, even the bobbing head of an unsuspecting swimmer.

So there was a quite slim chance that anything – not to mention subsonic Neptune missiles and Bayraktar drones – could have slipped through this aerial net.

So what could have possibly happened?

It could have been some kind of underwater drone, released either from some sneaky sub, or by a SBS team, coming from the western coast, with a stopover at Snake Island. Then that drone somehow managed to drill itself through the Moskva’s hull from below – and exploded its payload inside.

What follows comes from a top source in Brussels: serious, trustworthy, proven record spanning nearly two decades. Yet he may be just spreading disinformation. Or bragging. Or that may be rock solid intel.

Before we start, we should point out it’s hard to believe the Neptune/Bayraktar fairytale angle. After all, as we’ve seen, the Russian fleet had established a multidimensional surveillance/defense layer in the direction of Odessa.

The Moskva was near Odessa, closer to Romania. A year ago, the source maintains, a new phased array locator was installed on it: the illumination range is 500 km. According to the standard Ukrainian narrative, first the Moskva was hit by a drone, and the locators and antennas were smashed. The Moskva was half blind.

Then – according to the Ukrainian narrative – they launched two Neptune cruise missiles from the shore. Guidance was carried out by NATO’s Orion, which was hanging over Romania. The missiles zoomed in on the ship with the homing heads turned off, so that the radiation beam would not be detected.

So we have guidance by NATO’s Orion, transmitting the exact coordinates, leading to two hits, and subsequent detonation of ammunition (that’s the part acknowledged by the Russian Ministry of Defense).

The Moskva was on combat duty 100-120 km away from Odessa – controlling the airspace within a radius of 250-300 km. So in fact it was ensuring the overlap of the southern half of Moldova, the space from Izmail to Odessa and part of Romania (including the port of Constanta).

Its positioning could not be more strategic. Moskva was interfering with NATO’s covert transfer of military aircraft (helicopters and fighter jets) from Romania to Ukraine. It was being watched 24/7. NATO air reconnaissance was totally on it.

As the Moskva “killer”, NATO may have not chosen the Neptune, as spread by Ukrainian propaganda; the source points to the fifth-generation NSM PKR (Naval Strike Missile, with a range of 185 km, developed by Norway and the Americans.)

He describes the NSM as “able to reach the target along a programmed route thanks to the GPS-adjusted INS, independently find the target by flying up to it at an altitude of 3-5 meters. When reaching the target, the NSM maneuvers and deploys electronic interference. A highly sensitive thermal imager is used as a homing system, which independently determines the most vulnerable places of the target ship.”

As a direct consequence of hitting the Moskva, NATO managed to reopen an air corridor for the transfer of aircraft to the airfields of Chernivtsi, Transcarpathian and Ivano-Frankivsk regions.

In parallel, after the destruction of the Moskva, the Black Sea Fleet, according to the source, “no longer seems to have a ship equipped with a long-range anti-aircraft missile system”. Of course a three-band radar Sky-M system remains in play in Crimea, capable of tracking all air targets at a range of up to 600 km. One wonders whether this is enough for all Russian purposes.

So what do we really have here? Fantasy or reality? There was only one way to know.

I ran the info past the inestimable Andrei Martyanov, who knew the Moskva “as Slava in 1981 when she was afloat in the Northern Bay of Sevastopol and my class which was at first summer practice on board of old cruiser Dzerzhinsky was given an extensive introduction to her. So, she was an old lady and it is too bad that she had to finish her long life this way and at this time.”

Martyanov, once again, was the consummate professional, stressing no one, at this stage, really knows what happened. But he made some crucial points: “Per NSM (if we accept this version), even with its Low Observability and GPS guidance under normal (that is sea up to state 5-6) and normal radio-permeability, even the Moskva’s old frigate radar would have seen those missiles in distances of tens of kilometers, somewhere between 15-20 for sure. NSM, as any NATO anti-shipping missile, are subsonic, with their velocity roughly 300 meters per second. That leaves, even in a 15 kilometer range, 45 seconds to detect track and develop a firing solution for whatever ‘on duty’ AD complex. More than enough reaction time.”

Martyanov also stresses, “it is impossible to hide the external impact of the anti-shipping missile – one will immediately know what hit the ship. Moreover, to hit and sink such a target as the Moskva one has to launch a salvo and not only two missiles, likely 3-4 at least. In this case, Russia would know who attacked Moskva. Does NATO know? I am positive this event has NATO written all over it, if it is not an internal sabotage which absolutely cannot be excluded at this stage. I am sure if Nebo was operational it would have seen the salvo.”

Which brings us to the inevitable clincher: “If NATO was involved, I am sure we will see some retaliation, after all, as I am on record all the time, US bases in Middle East and elsewhere are nothing more than fat prestigious targets.”

So get ready: something lethally “asymmetrical” may be about to pop up.

0 thoughts on “The Moskva Riddle”