HOME / WORLD / Released Lula in for greatest fight of his life 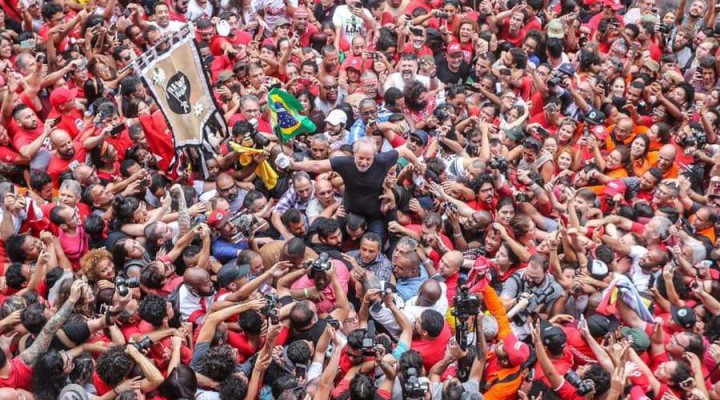 Better not mess with the former Brazilian president; Putin and Xi are his real top allies in the Global Left

Only two days after his release from a federal prison in Curitiba, southern Brazil, following a narrow 6×5 decision by the Supreme Court, former President Luis Inacio Lula da Silva delivered a fiery, 45-minute long speech in front of the Metal Workers Union in Sao Bernardo, outside of Sao Paulo, and drawing on his unparalleled political capital, called all Brazilians to stage nothing short of a social revolution.

When my colleagues Mauro Lopes, Paulo Leite and myself interviewed Lula at the federal prison, it was his Day 502 in a cell. By August, it was impossible to predict that release would happen on Day 580, in early November.

His first speech to the nation after the prison saga – which is far from over – could never be solemn; in fact he promised a detailed address for the near future. What he did, in his trademark conversationalist style, was to immediately go on the offensive taking down a long list of every possible enemy in the book: those who have mired Brazil into an “anti-people agenda.” In terms of a fully improvised, passionate political address, this is already anthology material.

Lula detailed the current “terrible conditions” for Brazilian workers. He ripped to pieces the economic program – basically a monster sell-out – of Finance Minister Paulo Guedes, a Chicago boy and Pinochetist who’s applying the same failed hardcore neoliberal prescriptions now being denounced and scorned every day in the streets of Chile.

He detailed how the Brazilian right wing openly bet on neo-fascism, which is the form that neoliberalism recently took in Brazil. He blasted mainstream media, in the form of the so far all-powerful, ultra-reactionary Globo empire. In a stance of semiotic genius, Lula pointed to Globo’s helicopter hovering over the masses gathered for the speech, implying the organization is too cowardly to get close to him on ground level.

And, significantly, he got right into the heart of the Bolsonaro question: the militias. It’s no secret to informed Brazilians that the Bolsonaro clan, with its origins in the Veneto, is behaving as a sort of cheap, crude, eschatological carbon copy of the Sopranos, running a system heavy on militias and supported by the Brazilian military. Lula described the president of one of the top nations in the Global South as no less than a militia leader. That will stick – all around the world.

So much for “Lula peace and love,” which used to be one of his cherished mottos. No more conciliation. Bolsonaro now has to face real, fierce, solid opposition, and cannot run away from public debate any more.

Lula’s prison journey has been an extraordinary liberating experience – turning a previously wounded statesman into a fearless warrior mixing the Tao with Steppenwolf (as sketched in Herman Hesse’s book). He’s free like he’s never been before – and he said so, explicitly. The question is how he will be able to muster the organizational work, the method – and have enough time to change the dire conditions for democratic opposition in Brazil. The whole Global South is watching.

At least now the die is cast – and crystal clear: It’s social democracy against neo-fascism. Socially inclusive programs, civil society involved in setting public policy, the fight for  equality versus autocracy, state institutions linked to militias, racism and hate against all minorities. Bernie Sanders and Jeremy Corbyn, to their credit, have offered Lula their unconditional support. In contrast, Steve Bannon is losing sleep, qualifying Lula as “the poster boy of the globalist Left” across the world.

This all goes way beyond Left Populism – as Slavoj Zizek and Chantal Mouffe, among others, have been trying to conceptualize it. Lula, assuming he remains free, is now ready to be the supreme catalyst of an integrated, progressive, “pro-people” New Global Left.

Now for the really nasty bits.

I saw Lula’s speech deep into the night in snow stormed Nur-Sultan, Kazakhstan’s capital, in the heart of the steppes, a land trespassed against by the greatest nomad empires in history. The temptation was to picture Lula as a fearless snow leopard roaming the devastated steppes of urban wastelands.

Yet snow leopards, crucially, are a species threatened with extinction.

After the speech I had serious conversations with two top interlocutors, Bern-based analyst Romulus Maya and anthropologist Piero Leirner, a crack authority on the Brazilian military. The picture they painted was realistically gloomy. Here it is, in a nutshell.

When I visited Brasilia last August, several informed sources confirmed that the majority of the Brazilian Supreme Court is bought and paid for. After all, they de facto legitimized all the absurdities that have been taking place in Brazil since 2014. The absurdities were part of a hyper-complex, slow-motion, rolling hybrid war coup that, under the cloak of a corruption investigation, led to the dismantling of industrial national champions such as Petrobras; the impeachment of President Dilma Rousseff on spurious charges; and the jailing of Lula, the work of judge, jury and executioner Sergio Moro, now Bolsonaro’s justice minister, who was completely unmasked by The Intercept’s revelations.

But there are no structural changes whatsoever on the horizon. The project remains a Brazil sell-out – coupled with a thinly veiled military dictatorship. Brazil remains a lowly US colony. So Lula is out of jail essentially because this system allowed it.

The military abide by Bolsonaro’s abysmal incompetence because he cannot even go to the toilet without permission from General Heleno, the head of the GSI, the Brazilian version of the National Security Council. On Saturday, a scared Bolsonaro asked the top military brass for help after Lula’s release. And crucially, in a tweet, he defined Lula as a “scoundrel” who was “momentarily” free.

It’s this “momentarily” that gives away the game. Lula’s murky juridical situation is far from decided. In a harrowing but perfectly plausible short-term scenario, Lula could in fact be sent back to jail – but this time in isolation, in a maximum security federal prison, or even inside a military barracks; after all, he’s a former chief of the armed forces.

The full focus of Lula’s defense is now to have Moro disqualified. Anyone with a brain who’s been through The Intercept’s revelations can clearly identify Moro’s corruption. If that happens, and that’s a major “if,” Lula’s already existing convictions will be declared null and void. But there are others lawsuits, eight in total. This is total lawfare territory.

The military’s trump card is all about “terrorism” – associated with Lula and the Workers Party. If Lula, according to the harrowing scenario, is sent back to a federal prison, that could be in Brasilia, which not by accident holds the entire leadership of the PCC, or “First Command of the Capital”– the largest Brazilian criminal organization.

Maya and Leirner have shown how the PCC is allied with the military and the US Deep State, via their asset Moro, to establish not a Pax Brasilica but what they have described as a “Cocaine Evangelistan” – complete with terrorist false flags blamed on Lula’s command.

Leirner has exhaustively studied how the generals, for over a decade on their website, have been trying to associate the PCC with the Workers’ Party. And the association extends to the Revolutionary Armed Forces of Colombia (FARC), Hezbollah and the Bolivians. Yes, this all comes straight from His Masters’ Voice’s playbook.

With the military betting on a strategy of chaos, augmented by Lula’s immense social base all over Brazil fuming about his return to prison and the financial bubble finally burst, rendering the middle classes even poorer, the stage would be set for the ultimate toxic cocktail: social “commotion” allied with “terrorism” associated with “organized crime.”

That’s all the military needs to launch an extensive operation to restore “order” and finally force Congress to approve the Brazilian version of the Patriot Act (five separate bills are already making their way in Congress).

This is no conspiracy theory. This is a measure of how incendiary Brazil is at the moment, and Western mainstream media will make no effort whatsoever to explain the nasty, convoluted plot for a global audience.

Leirner goes to the heart of the matter when he says the current system has no reason to retreat because its side is winning. They are not afraid of Brazil turning into Chile. And even if that ends up happening, they already have a culprit: Lula. Brazilian mainstream media are already releasing trial balloons – blaming Lula for the spike of the US dollar and the rise of inflation.

Lula and the Brazilian Left should invest in a full spectrum offensive.

The 9th BRICS summit takes place in Brazil this week. A master counter-coup would be to organize an off-the-record, extremely discreet, heavily securitized meeting among Lula, Putin and Xi Jinping, for instance in an embassy in Brasilia. Putin and Xi are Lula’s real top allies on the global stage. They have been literally waiting for Lula, as diplomats have confirmed to me over and over again.

If Lula follows a restricted script of merely reorganizing the Left, in Brazil, Latin America and even the Global South, the military system currently in place will swallow him whole all over again. The Left is infiltrated – everywhere. Now it’s total war. Assuming Lula remains free, he most certainly won’t be allowed to run again for the presidency in 2022. But that’s no problem. He’s got to be extra-bold – and he will be. Better not mess with the Steppenwolf.