HOME / WORLD / How to kill 10 million Afghans and not win

How to kill 10 million Afghans and not win 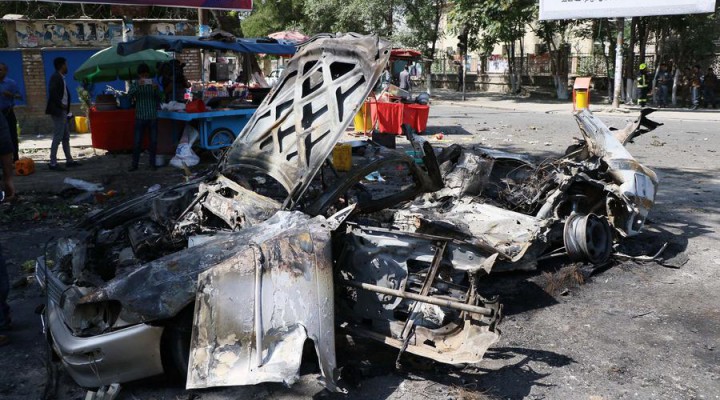 Afghanistan, bombed and invaded under the Cheney regime, was never a just war

“We’re like policemen. We’re not fighting a war. If we wanted to fight a war in Afghanistan and win it, I could win that war in a week. But I don’t want to kill 10 million people. Afghanistan could be wiped off the face of the Earth. I don’t want to go that route.”

Even considering the rolling annals of demented Trumpism, bolstered every single day by a torrent of outrageous tweets and quotes, what you’ve just read is simply astonishing. Here we have the President of the United States asserting that, 1) The US is not fighting a war in Afghanistan;  2) If the US wanted a war, the President would win it in a week; 3) He would kill 10 million people – although he doesn’t want it; 4) “Afghanistan” as a whole, for no meaningful reason, could be wiped off the face of the Earth.

Trump said all of the above while sitting alongside Pakistani prime minister Imran Khan – who, in a deft move, is trying to appease the White House even as he carefully positions Pakistan as a solid node of Eurasia integration alongside Russia, China and Iran.

When Trump says the US is not fighting a war in Afghanistan, he’s on to something, although it’s doubtful that Team Trump have told the boss that the real game in town, from the beginning, is the CIA heroin rat line.

It’s also doubtful Trump would ask for input from his hated predecessor Barack Obama. Obama may not have killed 10 million people, but the forces under his command did kill scores of Afghans, including countless civilians. And still Obama did not “win” – much less “in a week.”

Barack Obama did entertain the notion of “winning” the war in Afghanistan. After deliberating in solitary confinement for 11 hours, as legend goes, he “methodically” settled for a two-step surge, 21,000 troops plus 30,000. Obama believed the war on Afghanistan was a noble crusade and during his presidential campaign in 2008 always defined it as “the right war.”

Obama defended his surge on humanitarian imperialist grounds: “For the Afghan people, the return of Taliban rule would condemn their country to brutal governance, international isolation, a paralyzed economy and the denial of basic human rights to the Afghan people, especially women and girls.” The New York Times and the Washington Post applauded.

But, Kabul, we have a problem. Afghanistan, bombed and invaded under the Cheney regime, was never a “right” or “just” war. There was never any established Taliban connection to 9/11. Plotting and financing for 9/11 involved Saudis and cells in Germany, Pakistan and the UAE. Mullah Omar never dispatched any “terra-rists” on one-way tickets to America.

Nevertheless, the Taliban leadership in Kandahar did agree to a deal – brokered by Moscow – to surrender Osama bin Laden, who, without even the hint of an investigation, was proclaimed the evil 9/11 culprit only a few hours after the collapse of the Twin Towers. The Cheney regime rejected the Taliban offer, as well as a subsequent one, to hand over Osama to a Muslim nation for trial. The Cheney regime only wanted an extradition to the US.

The SCO steps in

With puppet Hamid Karzai barely reigning in Kabul, and the neocons already focused on their real target, Iraq, the occupation of Afghanistan was handed over to NATO. This had already been decided even before 9/11, at the G8 in Genoa in July, when it became clear Washington had a plan to strike Afghanistan by October. The Cheney regime badly needed a beachhead in the intersection of Central Asia and South Asia not only to monitor Russia and China but also to coordinate a drive to take over Central Asia’s massive gas wealth.

Notoriously fickle history in the Hindu Kush ruled otherwise. Incrementally, the Taliban started to get their mojo back throughout the 2010s, to the point that now they control as much as half of the country.

Even that fountain of vanity General David Petraeus – who had crafted the (failed) Iraq surge – always knew the Afghan war was un-winnable. Disgraced General Stanley McChrystal at least was more surgical: “We’ve shot an amazing number of people and killed a number, and to my knowledge, none has proven to have been a real threat.”

Seymour Hersh argued that Obama’s version of the killing of Osama bin Laden in May 2011 was an elaborate work of fiction – subsequently duly enshrined by Hollywood. One year later, Obama’s surge still had 88,000 soldiers in Afghanistan plus nearly 118,000 contractors. The surge then died a slow, ignominious death.

Anyone remotely familiar with the fractious geopolitics at the intersection of Central and South Asia knows that, for the US military-industrial-security complex, to withdraw from Afghanistan is anathema. Trump may be emitting some noise – but that’s just noise. Bagram air base is an invaluable asset in the Empire of Bases to monitor the evolving Russia-China strategic partnership.

The only feasible solution for Afghanistan is a pan-Eurasia mechanism being advanced by the Shanghai Cooperation Organization, with Russia and China at the helm, India and Pakistan as full members and Iran and Afghanistan as observers. Afghanistan will then be fully integrated as a node of the New Silk Roads, or Belt and Road Initiative, as part of the China-Pakistan Economic Corridor as well as the Indian mini-Silk Road through Afghanistan towards Central Asia starting from the Iranian port of Chabahar.

This is what all major Eurasia players want. This is how you “win” a war. And this is how you don’t need to kill 10 million people.