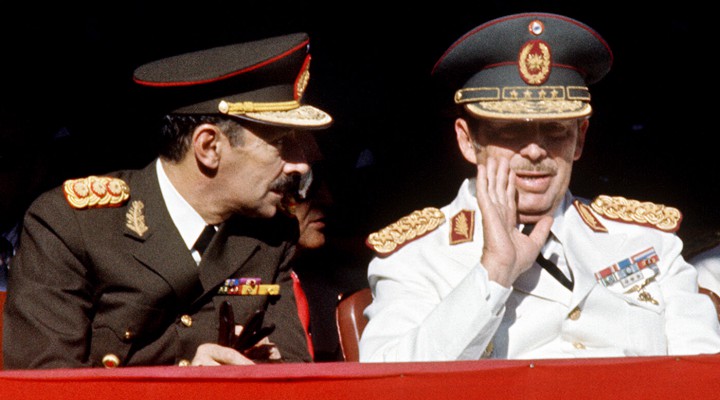 Operation Condor itself was a largely Western invention that was imposed on Latin America through a series of military coups, which again were backed by Western governments.

A recently declassified CIA document has revealed that members of the intelligence agencies of France, the United Kingdom and West Germany discussed how to establish “an anti-subversive organization similar to [the CIA’s Operation] Condor” in their own countries. Described by the CIA as “a cooperative effort by the intelligence/security services of several South American countries to combat terrorism and subversion,” Operation Condor was a campaign of state terrorism originally planned by the CIA that targeted leftists, suspected leftists and their “sympathizers” and resulted in the forced disappearances, torture and brutal murders of an estimated 60,000 people, as well as the political imprisonment of around half a million people. Around half of the estimated murders occurred in Argentina.

The document, released last Friday as part of a release of newly declassified U.S. government documents related to the U.S.-backed military dictatorship that ruled Argentina from 1976 to 1983, states that:

Representatives of West German, French and British intelligence services had visited the Condor organization secretariat in Buenos Aires during the month of September 1977 in order to discuss methods for establishment of an anti-subversion organization similar to Condor” due to their view that “the terrorist/subversive threat had reached such dangerous levels in Europe.”

The representatives from the three countries then stated that they felt that pooling “their intelligence resources in a cooperative organization such as Condor” would be an important way of combating the “subversive threat.” Notably, England at the time was already involved in an international “intelligence sharing” program known as ECHELON, a program between the “Five Eyes” intelligence pact between the U.K., the U.S., Canada, Australia and New Zealand that continues in a different form today.

The document, which was written in 1978, came two years after Operation Condor targeted left-wing Latin American exiles living in Europe. Several other documents inthe recent release discuss a decision made by Condor member countries in May 1976 to train and send a military unit to “conduct physical attacks” against left-wing Latin American exiles and their supporters in France, in what was codenamed “Teseo.” Several Condor countries, aside from Brazil and Bolivia, were eager to participate and the training of the “Teseo” unit did occur, though the CIA was apparently unaware whether the unit was actually sent to France.

Operation Condor: Made in the West

European interest in bringing home a state-sponsored terror campaign may seem shocking, given Europe’s publicly stated concerns at the time regarding Condor member countries’ mind-boggling human rights abuses and state-sponsored murders. But it will hardly surprise those who have studied Operation Condor, as the operation itself was a Western invention that was imposed on Latin America through a series of military coups, which again were backed by Western governments.

Operation Condor officially began in 1975, though CIA documents in this recent release suggest that the inter-country intelligence-sharing aspect had likely begun a year earlier in 1974. The countries involved — Chile, Brazil, Argentina, Uruguay, Paraguay, Ecuador, and Bolivia — were all backed and supported by the U.S., which was also incidentally the largest weapons dealer to these government over this same time frame. During the latter portion of Operation Condor, one of the recently declassified documents claims that Israel took over key roles played by the U.S. in Operation Condor, including the “training of local personnel and sales of certain types of advanced military equipment,” despite the many innocent Jews murdered by several of the Condor dictatorships.

Several of the Condor countries had seen their military dictatorships installed with U.S. government involvement, as was the case in Chile and Brazil, with the U.S. government suspected in other coups that preceded Operation Condor by only a few years, such as the 1971 coup in Bolivia and the 1973 coup in Uruguay. After the 1976 coup in Argentina — Argentina’s sixth and final coup of the 20th century — it too joined Operation Condor.

The U.S. provided planning, training, funding and arms for Operation Condor, and European nations also provided a significant number of weapons. France — one of the countries interested in creating a Condor-style program for Europe — was noted in one of the recently declassified documents for its “excellent prospects for sales of jet aircraft and air defense systems” to Condor dictatorships; while West Germany, another country interested in a European Condor, “should be able to market missiles, ground force equipment and submarines.”

U.S. and European intelligence agencies were well aware of what Condor dictatorships were doing with those weapons, as indicated by past and recent document releases that detail horrific descriptions of the torture and murder of those suspected of being left-wing and those suspected of sympathizing with the left, as well as those who opposed the neoliberal economic policies imposed by all of the U.S.-backed Condor dictatorships.

Some of the more infamous tactics used by Condor nations had also been inspired by past European and U.S. war crimes. This includes the “death flights,” where victims were drugged, bound and placed in plastic body bags, and/or had their stomachs cut open before being thrown out of a plane or helicopter over the ocean. This tactic was said to have been inspired by the actions of French armed forces during the Algerian war and, according to the 2003 documentary The Death Squads: The French School, French intelligence had taught these and other methods to Argentine military officials during the dictatorship.

Whitewashing away the full horror of Condor

Notably, much of the recent coverage of Operation Condor and the CIA releases has sought to whitewash the program’s horrific legacy, with The Guardian describing Operation Condor as “a secret programme in which the dictatorships of Argentina, Brazil, Paraguay, Uruguay, Chile, Bolivia, Peru and Ecuador conspired to kidnap and assassinate members of leftwing guerrilla groups in each other’s territories.” This, of course, implies that those targeted were guerilla members and thus combatants.

However, many — and one could convincingly argue the majority — of those killed, tortured and imprisoned were not members of guerilla groups, as there are thousands of documented cases of college students, musicians, writers, journalists, priests and nuns, pregnant women, teachers, indigenous leaders, union members and others who were subject to the extreme prejudice of Operation Condor despite not being combatants in any capacity. The Guardian also dramatically downplayed the program’s death toll, claiming that “the conspiracy led to the deaths of at least 100 people in Argentina,” while the actual figure is around 30,000. The Guardian also failed to mention the intimate role of the U.S. and other Western nations in facilitating and arming the program.

Such poor reporting is offensive to those who lost their lives and to their families, many of which have never stopped looking for their lost loved ones. Many of those families, such as Argentina’s “Grandmothers of Plaza de Mayo,” have spent the last several decades looking for the estimated 500 children and babies separated from their disappeared and murdered parents and given to dictatorship-supporting families.

In a clear testament to how the effects of Operation Condor are still felt today, one of those babies — now over 40 years old — was identified on April 9 and is set to be reunited with her father, who survived the dictatorship and has spent the last several decades looking for his lost daughter. The mother was kidnapped while pregnant, allowed to give birth to the baby and killed immediately afterwards.

The very idea that European countries wanted to bring such a horrific terror campaign to their continent to target “subversives” should serve as a cautionary tale to Europeans who trust their government’s professed interest in promoting democracy and human rights, all while exporting terror overseas.