HOME / Multimedia / Establishment War Against “We the People”

Establishment War Against “We the People” 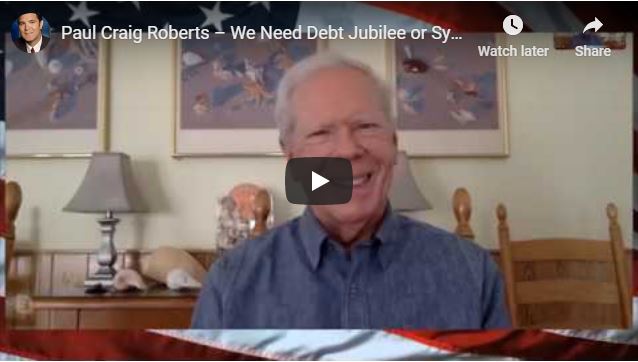 Former Assistant Treasury Secretary and award winning journalist Dr. Paul Craig Roberts (PCR) says the country has changed dramatically since the massively fraudulent and rigged 2020 Election that put Joe Biden in the White House.  Dr. PCR says, “First, consider there is now an organized war by the establishment against anyone who takes exception to their explanation of the election.  We see, for example, free speech is now dead.  Many of the institutions in the United States no longer believe in it.  You can’t protest what you perceive as a stolen election without being called an enemy of democracy.  Well, someone who is protesting what they perceive as a stolen election is defending democracy.  Now, that means they are an enemy because the narrative can’t be challenged.  You can’t say anything is wrong with the 2020 Election even if you have enormous evidence.  So, you don’t have free speech.  Also, a lot of people who attended the Trump rally (in Washington D.C. 1/6/21) have been fired simply for attending the rally.  So, you don’t have freedom of association. You cannot do anything that is seen as opposition to the establishment. . . . Biden was demanding personal allegiance from the troops who defended the inauguration.  So, it looks more and more like a dictatorship.”

Dr. PCR goes on to say, “The evidence is overwhelming that the election was stolen.  There is no doubt about it. . . . Let’s assume we don’t really know if the election was stolen.  We do know everybody who voted for Trump believes it was stolen.  We also know from the polls that 30% of Democrats believe it was stolen. . . .So, if that many people believe it was stolen, the government has an obligation to investigate and tell the people we looked at the evidence . . . and say it was or was not stolen, but they refuse to look at the evidence.  They had the explanation ready, and the explanation was ‘there’s no evidence.’ . . . They failed, we have a divided country and they just let the country be divided.  Now, they are going to pass a domestic terrorism law, and the purpose is to further control any dissent. . . . This is why I say we have crossed a line.  This is like Caesar crossing the Rubicon.  That was the end of the Roman Republic.  This is the end of democracy. . . . The Republican Party is dead because they failed Trump voters.”

Dr. PCR, who holds a PhD in Economics, says the Biden Administration policies are going to tank the U.S. economy.  For example, on Biden’s first day in office, he canceled the XL Pipeline and re-entered the Paris Climate Accord.  That killed tens of thousands of U.S. jobs with the stroke of Biden’s pen.  Again, this was on the very first day in office.  Dr. PCR says, “The economy is already wrecked, and so Biden is going to wreck a wrecked economy.”

The biggest problem Dr. PCR sees is not the federal debt.  Dr. PCR says, “The federal debt is not the problem, the real problem is the private debt. . . . The debt burden of the population has gone up over the last 25 years, and this is the difficult problem.  Income now is completely utilized in debt service.  This is what is meant by debt deflation.  Since the consumer is utilizing their money in debt service, there is no money for discretionary spending.  Therefore, there is nothing to support the rest of the economy. . . . Then, the lockdowns come, and they further restrict the income flow to the people who are already drowning in debt. . . .  The debt needs to be written off, but that is hard to do. . . .  So, when people talk about a collapse, this will be the cause of the collapse.  We will have a debt deflation collapse and not hyperinflation.”

Establishment War Against “We the People” – Paul Craig Roberts

Don’t Fall For The Establishment’s Tall Tales. There Was No “Violent Assault on the Capitol” and There is Abundant Evidence of Electoral Fraud

Is the Establishment Planning a False Flag “Insurrection” for Inauguration Day?

0 thoughts on “Establishment War Against “We the People””