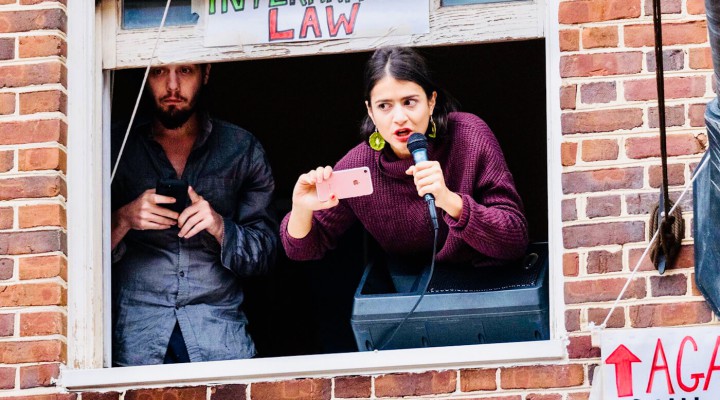 The Trump administration is violating international law and harassing American journalists in plain sight. These actions are sadly taking place in a country that prides itself on upholding the First Amendment to its Constitution, which should be protecting press freedom.

MPN- MintPress News journalist Alexander Rubinstein and a reporter for The Grayzone, Anya Parampil, are besieged inside the Venezuelan Embassy in Washington, and have been since April 30, in an egregious attack against press freedom. On Wednesday evening, events took a turn for the worse as the Metropolitan DC police cut off the power and water to the building — a violation of international law under the Vienna Diplomatic Conventions, Article 25, which reads, “The receiving State shall accord full facilities for the performance of the functions of the [diplomatic] mission.”

Account balance of Venezuelan Embassy is $0.00. It’s legal owners have paid the bill.

Sources also tell me Pepco promised not to shutoff power as of yesterday.@PepcoConnect are you aware this shutoff is a violation of int. law (Vienna Diplomatic Conventions, Article 25)? pic.twitter.com/UQ3zY5lcxb

There is little doubt that this blackout and the other illegal punitive measures taken against the activists and journalists inside the embassy –which have been described by the activists as sanctions — were intended to silence journalists covering the Embassy Protection Collective’s efforts to protect the Venezuelan Embassy from fascist, pro-Venezuela-coup protesters.

On Wednesday night, after the power was cut, I spoke with Rubinstein, who said he had 5 percent battery left on his phone.

Members of the Collective are living inside the embassy at the invitation of the elected government of Venezuela and show no signs of backing down.

In a video statement, Kevin Zeese of Popular Resistance and an activist with the Embassy Protection Collective revealed that the Collective has been prepared for the electricity shut down and pointed to parallels between the way the U.S. government treats the Venezuelan people and what it is doing to the Embassy Collective:

US authorities illegally cut off power at the Maduro gov’s diplomatic mission.

The #EmbassyProtectionCollective releases a statement saying they were prepared for this, aren’t going anywhere & see parallels between Washington’s treatment of Venezuelan ppl & embassy protectors. pic.twitter.com/b0HJYKybmu

Rubinstein and Parampil’s coverage is drawing attention to the violent face of the U.S.-backed Venezuelan opposition and to the dire treatment Venezuelans face if the U.S.-backed coup succeeds and installs the Juan Guaidó government. The journalists’ live streams, photography and tweets from their social media pages and coverage for MintPress News and The Grayzone have gone viral. Pro-coup protesters are shown assaulting peaceful embassy protectors; violently breaking into the building and vandalizing property; threatening to rape and kill embassy protectors and journalists inside; yelling racist and sexist slurs at them and taunting the residents of the embassy and journalists by name; and assaulting anyone attempting to bring food inside the building, including women and a 72-year-old man. 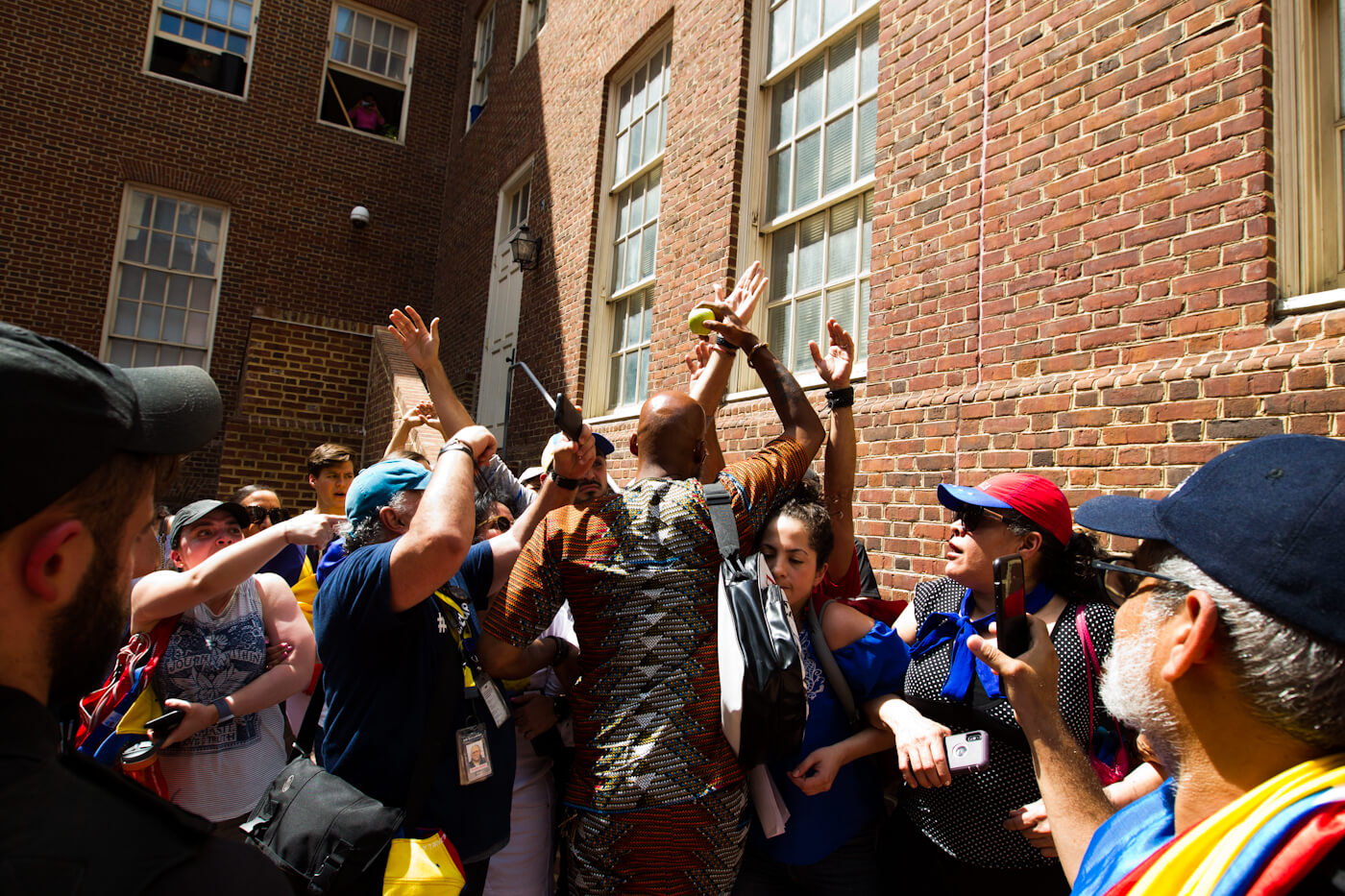 Their live streams have also exposed how the Metropolitan DC police and Secret Service, who are “guarding the embassy,” are nakedly serving the interests of the opposition by actively blocking food, medicine and supplies, including toothbrushes and tampons, from entering the building to reach activists, and by allowing pro-coup protesters to violently assault the embassy protectors without any repercussions.

While embassy protectors have been inside the building since April 10, the pro-coup protesters officially laid siege to the building on April 30, and have repeatedly stated their intention to prevent the access to food by the people inside.

“We have decided to give them a bit of the experience of living in Venezuela under the failed socialism of Maduro. As of this moment, they will not have electric power. Next step: your exit,” stated Carlos Vecchio — the Venezuelan “Ambassador to the U.S.,” appointed by the U.S. to represent Juan Guaidó — in a live video posted on Twitter. Vecchio is confessing to ordering the shut off of water and power.

On Wednesday evening, the pro-coup protesters assaulted the 72-year-old president of Veterans for Peace, Gerry Condon, for symbolically trying to deliver a single cucumber to the embassy protectors. He was then assaulted and tackled again by the Secret Service. Instead of arresting the assailants, the Secret Service arrested the injured elderly man.

Please join me in calling on D.C. Mayor Muriel Bowser, The Committee To Protect Journalists (CPJ), Amnesty International, and Human Rights Watch to demand that the DC Metropolitan police and Secret Service be held accountable for allowing harm towards these journalists; restore power so that these journalists can continue their reporting; and remove the siege that the Secret Service has perversely reinforced on the building to allow food, water and medical supplies in.

It’s only a matter of time before these activists could be violently evicted from the embassy by the supporters of the U.S.-appointed Juan Guaidó, despite being invited by the legal government of Venezuela — but the journalists that could be documenting this clear violation of international law are being blocked from reporting it to the world. Such a blackout is worthy of a tin-pot dictatorship.

The Trump administration is violating international law and harassing American journalists in plain sight. These actions are sadly taking place in a country that prides itself on upholding the First Amendment to its Constitution, which should be protecting press freedom.

0 thoughts on “MintPress, Grayzone Journalists Endure US Govt Blackout and Siege at Venezuelan Embassy in DC”