HOME / WORLD / Tunisia: Why what happens next is of huge international significance

Tunisia: Why what happens next is of huge international significance 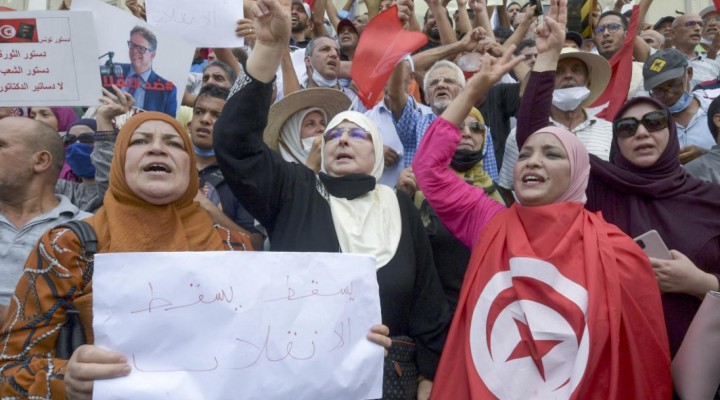 The West has been mostly silent following Kais Saied’s power grab. But it has a vested interest in ensuring the delicate dynamic between political Islam and democracy is preserved

On the global stage, Tunisia may seem like a country of minor significance. But it is where, in the space of a decade, what became known as the Arab Spring began and is now, in all probability, ending.

The relatively peaceful Tunisian “transition” was unfortunately followed by much bloodier ones in Egypt, Yemen, Libya and Syria. In the last three cases, real civil wars have ensued with very heavy human tolls.

Together with Lebanon, Tunisia was and probably remains the most advanced Arab civil society. This could help explain its relatively peaceful transition from Ben Ali’s authoritarian regime to the subsequent freely elected governments in which the Ennahda Party, an expression of the Muslim Brotherhood, played an important role.

Tunisia stands at the crossroads of Europe and North Africa and between the western and eastern Mediterranean. It is well-positioned to observe events in its turbulent neighbour Libya, and is a good place to gauge the complex dynamic between political Islam and democracy.

If Tunisia seemed to be the only success story of the Arab Spring, then that all changed in July. It was then that its president, Kais Saied, carried out a coup, dissolving parliament and assuming extraordinary powers after months of growing tensions over economic and social discontent with the government of Prime Minister Hichem Mechichi and the parliament, chaired by Ennahda’s leader, Rached Ghannouchi.

Saied, who is a professor of constitutional law, justified his decision by invoking article 80 of the Tunisian constitution, adopted in 2014. However, his interpretation and application of that article seem to have gone, in the opinion of many Tunisian law experts, far beyond the original intent.

Meanwhile, the internal tension triggered by the coup shows no sign of abating. But the effects of the pandemic and economic crisis, aggravated by a weak government and widespread corruption, have meant a relatively easy ride for Saied and his supporters.

There have been clashes between the president and those vehemently opposed to his actions, with the opposition spared neither incendiary statements nor irritating decisions, such as the indefinite extension of emergency measures. Saied has also proposed potentially polarising solutions, such as the suspending of the constitution and calling a referendum to amend the political system.

Despite all of this, the international community, and especially the West, which according to its claimed values should be vocal in these situations, has offered only largely tepid responses and even deafening silence.

And yet the developments in Tunisia could be framed in terms of a political degeneration that’s traceable back to the long-standing split dividing the Arab-Islamic world on political Islam. This split sees Turkey and Qatar supporting the Muslim Brotherhood, with the United Arab Emirates, Saudi Arabia and Egypt strenuously opposing it; a confrontation that has found in the Libyan conflict one of its main battlegrounds.

In other words, Tunisia could be the final piece of a settling of accounts that has already seen the wide international acceptance of Egypt’s brutal 2013 coup that overthrew the democratically elected government of President Mohamed Morsi – also an expression of the Muslim Brotherhood.

We may also be on the brink of seeing major policy U-turns in the Middle East and North Africa, with the US withdrawal from Afghanistan and the fall of the country to the Taliban triggering an earthquake that has reverberated across the region.

But regardless of the constitutional discussions, the feeble reactions to the coup and the nature of its origins, Tunisia deserves attention because we are seeing yet another authoritarian chapter in a region where, recent history teaches us, such events tend to lead to more explosive and difficult-to-manage crises.

In our current highly uncertain international world, with the pandemic, the storm clouds of inflation and excess debt gathering on the horizon and a worrying resumption of competition between the great powers after the 30-year US unipolar era, it is perhaps also understandable that western democracies may be tempted to privilege a brutal normalisation over the strenuous defence of their own frequently claimed values. It would be a serious mistake.

Firstly, it is quite difficult to see any acceptable and enduring stability in what Saied is accomplishing; secondly, it is time to stop the distinction between “good” and “bad” dictatorships that some western democracies still deploy according to their own interests.

For major international stakeholders and southern European countries – with Italy in particular on the frontline – the events in Tunisia also represent a further complication for the management of the complex Libyan situation. For Libya is now part of a bigger Great Game in the eastern Mediterranean: a crossroads of conflicting interests also involving France, Russia, Egypt, Turkey, Greece, Israel, Lebanon and some Gulf monarchies, revolving around security, energy supplies and migration.

Managing the situation in Libya but ignoring what is happening with its western neighbour would be counterproductive. Any solution must be comprehensive and, above all, based on a committed deployment of the European Union’s considerable, but poorly used, soft power.

At this critical time, there is no one better to promote such EU engagement than Italian Prime Minister Mario Draghi, highly regarded as he is internationally and also within the EU. Draghi’s involvement might also help the EU deal with the looming leadership void in Europe due to Brexit Britain’s self-exile, the uncertainties of a post-Merkel Germany, the gathering clouds surrounding Macron’s re-election in France next spring and the growing “Asian distractions” affecting the United States.

A solution to the Tunisian crisis that safeguards the results of the last decade is a fundamental prerequisite for better dealing with the difficult situation in Libya and the broader, threatening security situation in the Sahel region as a whole.

Therefore, the EU must identify its main external threats, starting with those close to home geographically – essentially the EU’s southern and southeastern flanks.

Finally, the EU, with its substantial Muslim population, has a vested interest in ensuring that the delicate dynamic between political Islam and western-style democracy further consolidates itself through the ballot box rather than military coups.

Tunisia, ultimately, offers this dual opportunity. For the EU, what is taking place there matters, far more than any Indo–Pacific strategy.

Was There a Coup in Tunisia? Expert Fadil Aliriza Breaks it Down

0 thoughts on “Tunisia: Why what happens next is of huge international significance”