HOME / WORLD / US Creating Arab And Asian Counterparts To NATO 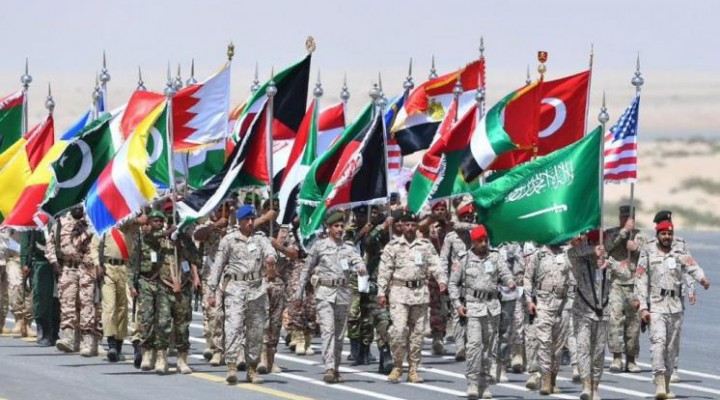 The US has recently been stepping up its military and political activities in several areas. In addition to the Pentagon’s main focus on the Middle East and Afghanistan under the guise of combating terrorism and on Europe in order to “control Russia”, the last two years has seen a notable rise in activity in the Indo-Pacific region due to China.

In early October, however, the US suddenly established a presence in North Africa.

From 29 September to 4 October, US Defense Secretary Mark Esper visited countries in North Africa and the Mediterranean region – Morocco, Algeria, Tunisia and Malta. Important bilateral cooperation documents were signed in Tunisia and Morocco – so-called “roadmaps” for military and security cooperation.

The US promised to help Tunisia protect its borders, which could be threatened by neighbouring Libya, and there was a similar offer for Morocco with regards to the Sahel region. The agreement calls for cooperation over the next ten years.

Great importance is attached to the African Lion exercise, which the US believes should be an attractive event for participants from all over the African continent.

While visiting Rabat, Mark Esper said in a speech that the Kingdom of Morocco and the US “are working together to promote security, stability and prosperity for our common goals and our peoples”, noting that his country is driven by the desire “to continuously consolidate its strong and long-standing commitment to Africa and especially to Morocco, a strategic ally of the United States outside NATO and a gateway to the African continent”. The US Defence Secretary said he is “confident” that the two countries “will remain allies and strategic partners for generations to come”.

Meanwhile, Morocco does not recognise the US-mediated agreement between Israel and the UAE. His Majesty King Mohammed VI of Morocco has stated that “all attempts to undermine the status of Jerusalem are unacceptable”. Washington’s emissaries are trying to ignore such “misunderstandings” and emphasise what would be of interest to their interlocutor.

Thus, speaking in Tunisia, Esper openly stated that “our strategic competitors China and Russia continue to intimidate and coerce their neighbors while expanding their authoritarian influence worldwide, including on this continent”. Of course, since Morocco is a kingdom, Esper made absolutely no mention of authoritarianism during his speech in the country.

In Algeria, the visit was limited to negotiations; no documents were signed. Considering that Algeria has long collaborated with Russia in the procurement of various types of weapons, a senior US official testing the water like this signifies a serious attempt to interfere in regional security issues. Given the statement by Algeria’s new president, Abdelmadjid Tebboune, that the former regime is no longer, the US sees this as a chance to reset relations and establish its influence.

It should be noted that Mark Esper previously flew to Israel, where he met with the country’s defence minister, Benny Gantz, and promised to maintain all the priorities that the US has traditionally maintained for Tel Aviv with regard to other countries in the region.

In fact, immediately after Esper’s whirlwind tour, the Quadrilateral Security Dialogue (Quad) held a meeting in Tokyo from 4 to 6 October. The Quad is made up of the US, India, Australia and Japan, and it was initiated in 2007 by Prime Minister Shinzo Abe of Japan during a crisis in relations with China. Today, the anti-China agenda is back on the table, but it is now being promoted more by the US than Japan.

US State Secretary Mike Pompeo, who attended the meeting, said that China’s increasingly assertive activity in the region made it more important than ever for the four Indo-Pacific countries. He also said it was “more critical now than ever that we collaborate to protect our people and partners from the CCP’s exploitation, corruption, and coercion”.

Alexander Neill, an Asia-Pacific security analyst based in Singapore, believes that the “real clincher” for the renewed momentum of the Quad grouping is down to “India’s buy in”. He adds: “In recent years there has been much speculation about the quad becoming a formalised body. But it had been constrained by India in particular, which is a traditional stalwart of the non-aligned movement. The US, on the other hand, has been very consistent with its messaging under President Donald Trump… Coercive actions by China would not only result in its self-isolation but would prompt like-minded friends and allies to coalesce together. The quad is a manifestation of this.”

According to Neill, Beijing “will accuse the US of containment and Cold War mentality” and of building alliances “to suppress China’s rightful rise”.

China has described the Quad as an “exclusive clique” whose actions target third parties.

Given that Australia usually takes its cue from the US, closer cooperation with India will be a challenge both for its regional neighbours and for Russia, which has been a long-standing partner in the supply of various weapons systems, among other things. With an increase in cooperation between India and the US, New Delhi will focus more on US suppliers. And India’s more formalised participation in the Quad or other US initiatives would be symptomatic of the collapse of the Non-Aligned Movement.

Japan’s new prime minister is thought to be facing a more delicate balancing act. Tokyo is seeing an improvement in relations with Beijing, but it is also maintaining close ties with the US, India and Australia. On 5 October, Yoshihide Suga told journalists that he will always seek to promote “the vision of a free and open Indo-Pacific” and that he wants to “build stable relations with neighbouring countries, including China and Russia”.

If we add the transatlantic area as represented by the NATO bloc to this framework of cooperation with Arab and North African countries and the Quad forum, we can see that the US is trying to build a network of alliances that starts at the Western Atlantic and moves through Asia and Africa to end in the Far East. This axis cuts the World Island (which, according to Halford Mackinder, incorporates Eurasia and Africa) in two and touches on the Rimland – a coastal area that has always attracted US strategists.

0 thoughts on “US Creating Arab And Asian Counterparts To NATO”