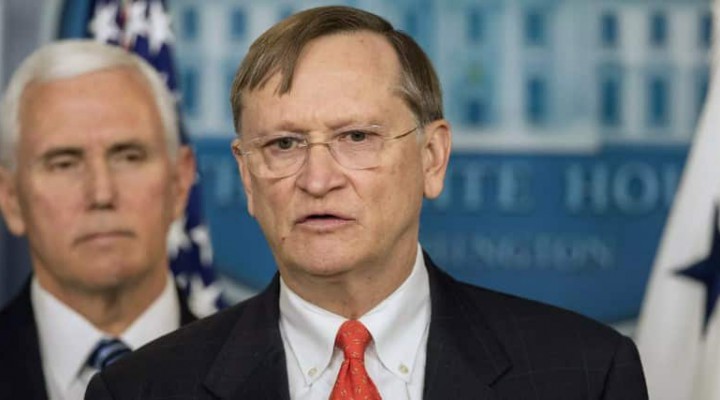 The Intercept: A WHISTLEBLOWER COMPLAINT filed earlier this week partially solves the mystery of how the country with the most expensive health care system on earth wound up unable to provide enough face masks to protect its workers. The report from Rick Bright, who was ousted from his job as director of the Biomedical Advanced Research and Development Authority, a division of Health and Human Services, in April, also provides a new villain in the tragic saga of the Trump administration’s mismanagement of the coronavirus crisis: Robert Kadlec.

Another criminal to add to to the list of those who have killed, & continue to kill, Americans: Dr. Robert Kadlec, the Assistant Secretary for Preparedness and Response (ASPR) at the U.S. Department of Health & Human Services (HHS). https://t.co/0r4hn6IINc

Trump’s stockpile chief, Robert Kadlec, before Covid-19, dismissed infectious diseases as threat to focus on biodefense. He steered a huge vax contract to an old client, which has received $3/4 bln in gov't deals .https://t.co/TV2rm0DU8L

Though officially tasked with quickly mobilizing a national response to public health crises, Kadlec, the assistant secretary for preparedness and response and formerly Bright’s boss, is described in the report as a petty tyrant who ignored, mocked, and thwarted Bright’s repeated efforts to address the imminent shortage of masks and other personal protective equipment in January and February, as the virus began spreading across the country.

In a lengthy, detailed account that reads like a script from a horror movie and will likely earn Kadlec the lasting enmity of everyone who has lost a front-line worker to the virus, Bright lays out a series of unsuccessful and increasingly desperate attempts to push Kadlec and HHS Secretary Alex Azar to recognize and address the looming shortage of personal protective equipment. The attempts to call attention to the crisis began in mid-January, when Bright, a virologist who has spent decades in government preparing for public health emergencies, called for a senior-level meeting to coordinate the response to the coming pandemic.

This complaint by Dr. Bright is just devastating. Details criminal negligence on pandemic preparations by Dr. Kadlec, Alex Azar and other members of the Trump administration #Incompetence #Idiocracy https://t.co/zNlgddlP24

(5/ ) Back to the complaint. On Jan 18, Dr Bright became very worried about the threat COVID posed to US, and requested a disaster leadership group meeting (DLG) to plan response. Dr. Kadlec replied by email that he was “[n]ot sure if that is a time sensitive urgency.” (p. 16)

But Bright’s bosses were unconvinced of the need for the meeting of the “disaster leadership group.” In a January 18 email, Kadlec responded to Bright’s suggestion that he was “not sure if that is a time sensitive urgency.”

and from Business Insider:

Business Insider: Robert Kadlec is the Trump administration official in charge of preparing for a biological disaster. Before that, however, he was a “strategic adviser” for a company called Emergent BioSolutions Inc., a fact he neglected to disclose before his office awarded the company a contract worth over $2 billion, according to a new report.

"staggering degree of inaction from administration"

"Robert Kadlec..declined to coordinate senior level meetings in..January as..virus was spreading across China, suggesting that he was '[n]ot sure if that is..urgency."

"Dr. Kadlec criticized his insistence that the U.S. start working on vaccines at the outset of the COVID pandemic, stating that the focus should be on therapies because vaccines would take too long to develop."

Hmm, "too long" as in, until after the elections? 🤔

In a report on Monday, The Washington Post revealed that Kadlec, the assistant secretary for preparedness and response at the US Department of Health and Human Services, failed to inform Congress of his relationship with Emergent — and its founder, Fuad El-Hibri, with whom he helped launch a biodefense startup East West Protection.

In 2019, reflecting concern that the greatest biological threat was a foreign government weaponizing an existing virus, Kadlec’s office “made a deal to buy up to $2.8 billion of the [smallpox] vaccine from a company that once paid Kadlec as a consultant,” The Post reported, “a connection he did not disclose on a Senate questionnaire when he was nominated.”

Kadlec’s long-term focus has been on preparing for bioterrorism. And when he assumed his position in the Trump administration he turned towards beefing up biodefense, while “cutting planned spending on emerging infectious diseases, despite warnings from scientists that a natural contagion could also be devastating,” The Post reported.

His office also canceled an Obama-era deal, worth $35 million, that could have enabled the government to manufacture an additional 1.5 million N95 masks per day, The Post noted.