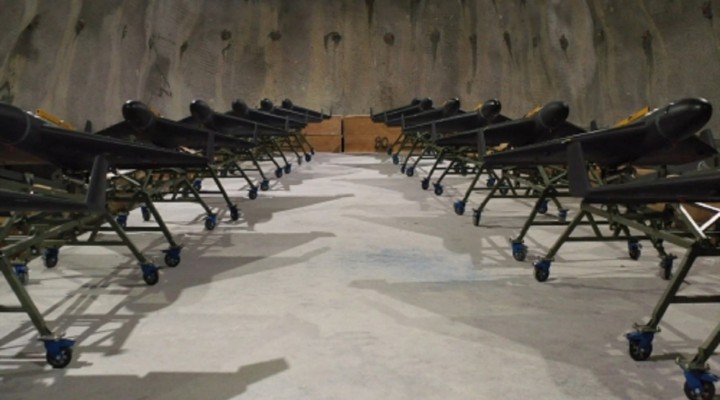 The bases, which were built deep in an unidentified mountain, were inaugurated by IRGC Commander Major General Hossein Salami.

The missile base hosts a number of road-mobile dual launchers armed with what appears to be solid-fueled short-range ballistic missiles of the Fateh-110 family.

Meanwhile, the drone base houses what appears to be dozens, and possibly hundreds, of Shahed-136 suicide drones, which have a range of 2,000 kilometers. Multiple drone launch systems are also stored in the base. Commander of the IRGC Aerospace Force, Brigadier General Amir-Ali Hajizadeh, said that up to 60 drones can be launched from the new base simultaneously.

“The power of our missile fire and simultaneous launches have increased more than six to seven times, and the preparation time … has been greatly reduced,” the commander added.

The IRGC maintains a number of underground missiles bases in different parts of Iran. However, this was the first time the force unveils an underground base for suicide drones.

Iran has been working to boost its offensive capabilities for the last few years in response to threats from the US and its allies in the Middle East, first and foremost Israel. Precision-guided ballistic missiles and suicide drones offers Iran the ability to defend itself and harm its enemies. Tehran has been also suppling these advanced systems to its allies in the region.

It’s worth mentioning that the two new IRGC underground bases were unveiled amid reports of a near international deal on the relaunch of the 2015 Iranian nuclear agreement.

The commander of the Islamic Revolution Guards Corps (IRGC)’s Aerospace Division says the country can simultaneously launch 60 unmanned aerial vehicles (UAV) from its newly unveiled underground base with no target limitation.

Addressing a ceremony on Saturday to unveil two missile and drone tunnel bases built at the heart of high mountains, Brigadier General Amir-Ali Hajizadeh said 60 drones can fly from the base at the same time without any limitation on the targets because the “range of the unmanned aircraft is long and not limited.”

“We can hit any hostile target,” Hajizadeh emphasized.

Earlier in the day, IRGC Chief Commander Major General Hossein Salami unveiled the bases, which house ground-to-ground missile systems with advanced equipment, as well as attack drones that can penetrate the enemy’s radar and defense networks.

The Aerospace Force of Iran

The bases are also home to unmanned aerial vehicles with a range of 2,000 kilometers, two-missile launch platforms and multi-drone launch platforms, which were unveiled during the IRGC’s Great Prophet 17 joint military exercises in Iran’s southern shore in December 2021.

Elsewhere in his remarks, Hajizadeh said the IRGC Aerospace Force has managed to boost the firepower of missiles by six to seven times and to largely reduce the preparation time for the launch of missiles.

“Our missile firepower and ability to launch projectiles simultaneously have increased six to seven times and the duration of preparing missiles for launch as well as the intervals between the launches have been reduced remarkably,” the senior IRGC commander added.

He emphasized that the IRGC Aerospace Force has pursued serious plans to exponentially enhance the capabilities of its forces upon a decree by Leader of the Islamic Revolution Ayatollah Seyyed Ali Khamenei.

He said the enemy has been talking about the IRGC’s drone power, which proves an increase in Iran’s power.

Iranian officials have repeatedly underscored that the Islamic Republic will not hesitate to build up its defense capabilities, emphasizing that such abilities are entirely meant for the purpose of defense and will be never subject to negotiations.