HOME / SOCIAL/CULTURAL / Closing In: The Covidians 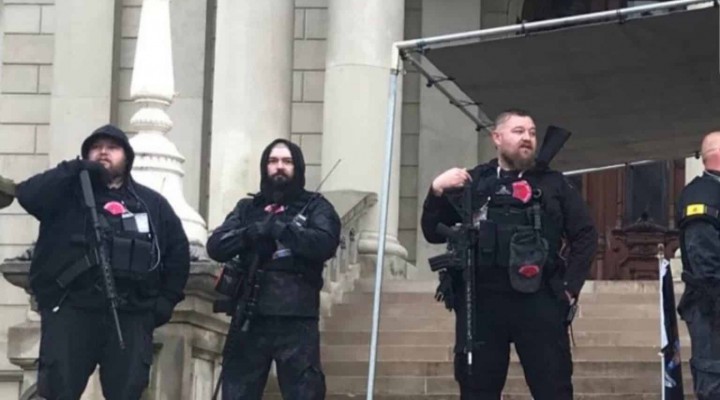 It is reasonable to cite a rogue command within the US Army, headquartered out of Fort Huachuca, Arizona, as the center of the worldwide pandemic.

This organization using ‘troll rooms’ manages internet assets, shuts down unfriendly websites like VT and South Front, and, all the while, runs drone wars around the world and, less well known, here at home as well.

The ‘parents’ of the Huachuca operational center, and there are several around the world, began with the marriage between US Army intelligence and psychological warfare capabilities in the 1980s at the Presidio.

There, a very real Satanic/Pedophile ring was discovered that operated at every major US army facility in the US and Europe.

Think of the Pentagon standown on 9/11.

The same friendly faces showed up again in 2005 at Minot Air Force Base when a B 52 illegally loaded with nuclear weapons took off for places unknown until rounded up and sent back to Barksdale AFB.

Let’s move forward to Bush 43 and watch the building of a drug empire in Afghanistan while the US is put under ‘martial law lite’ with the Patriot Acts and an Israeli occupation under the Department of Homeland Security.

Want to discuss fake gas attacks in Syria and the marriage between Army intelligence and ISIS/al Qaeda?  Now much more?  Endlessly more!  And now?

We are literally drowning in Pentagon funded bat virus weaponization programs starting in 2002, programs that were designed to protect the US from a SARS COV attack but that never published a single word that has been put to use.

With $350 million spent on SARS COV research paid for by USAID and the Pentagon, not one word from a single publication has been used toward developing treatments despite the fact that these studies, and they are many, were specifically to develop treatment and vaccination protocols for a chimera SARS COV variant like we are facing now.

Instead, they weaponized the virus.  They also unleashed it, first in China, possibly using visiting US personnel in October 2019.

Then they unleashed a second strain in Italy and a third in France.

However, the real story is about the real target, and that is now and has always been the United States.  The other virus deployments were cover and deception operations, a standard operational procedure for the US Defense Intelligence organization now known to be responsible.

This ‘organization’ was established in 2005 within the US Army and a parallel within the CIA.  Both work closely with the intelligence agencies of Israel, Saudi Arabia, Turkey and the United Kingdom, organizations answerable to a world shadow government.

What is written here is easy to prove, well documented and totally censored.  It doesn’t require dot connecting or conspiracies to figure any of this out, these assholes publish their findings and brag openly about the weapons they make.

They have no reason to be afraid, after all, they are under the protection of William Barr and we all know how he can fix any problem.

Within the anti-lockdown movement we have discovered irregularities.  A DOJ sources says the FBI is now investigating “Covidians,” members of White Supremacist/Christian Nationalist groups that are deploying 20-somethings who are known SARS COV2 carriers to infect as many Americans as possible.

The number is more than 50 and we are told less than 100.  Each gets a new truck (high end/off road) and cash, lots of cash.

Backing this assertion is statistics, soaring infection rates in rural areas that should have NO new cases.  This is Ottawa County, home of Michigan’s GOP 1%’er elites:

Trump was using top grade projections when he gave out the 100,000 death figure, based on a burn through in New York, Detroit and elsewhere, which we are seeing 100%.  Trump was right.

Where we jump ship is that areas now under many weeks of lockdown, where the average exposure to infection rate is less than 4 days (not 14, that’s the maximum figure), we are having rampant infections.

Except for those purposefully spreading the virus, we should have been out of lockdown by now and fully plateau’d.

You see, when COVID broke out in urban areas and even with Trump reacting slowly, each rural county should have burned through new cases by April 10.  Instead, we are growing as the graph above shows, yet there is no imaginable infection vector that could cause this other than active spreading of the disease through aerosol deployments.

All new science tells us that SARS COV2 was engineered to be spread through what appear to be paint or insecticide cans and that the virus lives, not hours, but days, real science being censored.

It is key to understand exactly how easy all this has been.  First of all, we noted some odd things when looking at the armed lockdown militia types.  Almost all have felony convictions that prohibit gun ownership and even open carry.  An even higher percentage have domestic abuse convictions or are subject to personal protection orders.

They are being protected by county prosecutors just like we have seen in Brunswick, Georgia and the Arbery killers, those arrested and those still shielded by the local district attorney.

The overt belief system here is loosely based on the prison gangs of the 70s and 80s, neo-Nazi beliefs now blended with Christian Zionism and extreme right wing politics.

This has allowed long recognized criminal gang leaders to be rehabilitated into defacto political figures who now lap down the cash of Betsy DeVos, Adolf Coors and the MEGA group formerly headed by Jeffrey Epstein, Les Wexner and Sheldon Adelson.

The campaign itself has many sectors including a broad disinformation campaign using dozens of surrogates, particularly from the anti-vaxx community.  Fat paychecks are going out to anyone with a bioscience background that will  promote one of a dozen fake narratives blaming vaccines or promoting ‘unlock’ based on misrepresentation of real SARS COV 2 threats.

Worse still, it appears as though the MSM has made things worse.  Despite the overt war with Trump, the MSM has been ‘controlled opposition’ all along, were one to take a minute or two and look at how many times the US government has been tied to ISIS and al Qaeda and even the White Helmets and yet the public is engineered into idiocy very successfully.

0 thoughts on “Closing In: The Covidians”