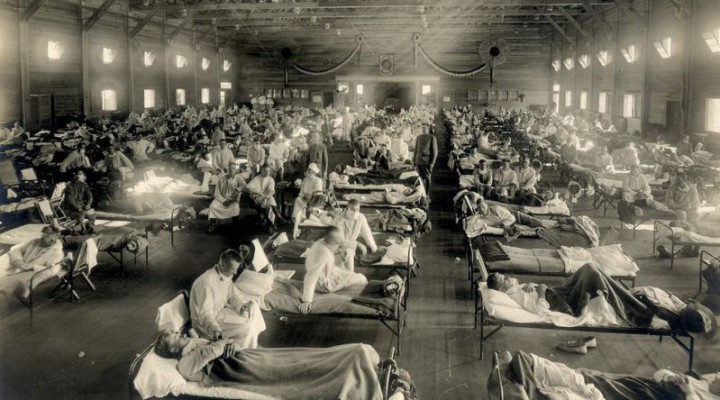 Just like today, brass and bureaucrats ignored warnings, and sent troops overseas despite the consequences.

The U.S. military has been forced by the coronavirus pandemic to make some serious changes in their operations. But the Pentagon, and especially the Navy, have also displayed a revealing resistance to moves to stand down that were clearly needed to protect troops from the raging virus from the start.

The Army and Marine Corps have shifted from in-person to virtual recruitment meetings. But the Pentagon has reversed an initial Army decision to postpone further training and exercises for at least 30 days, and it has decided to continue sending new recruits from all the services to basic training camps, where they would no doubt be unable to sustain social distancing.

On Thursday, the captain of the aircraft carrier USS Theodore Roosevelt, on which the virus was reportedly spreading, was relieved of command. He was blamed by his superiors for the leak of a letter he wrote warning the Navy that failure to act rapidly threatened the health of his 5,000 sailors.

Secretary of Defense Mark Esper justified his decision to continue many military activities as usual by declaring these activities are “critical to national security.” But does anyone truly believe there is a military threat on the horizon that the Pentagon must prepare for right now? It is widely understood outside the Pentagon that the only real threat to that security is the coronavirus itself.

Esper’s decisions reflect a deeply ingrained Pentagon habit of protecting its parochial military interests at the expense of the health of American troops. This pattern of behavior recalls the far worse case of the U.S. service chiefs once managing the war in Europe. They acted with even greater callousness toward the troops being called off to war in Europe during the devastating “Spanish flu” pandemic of 1918, which killed 50 million people worldwide.

Itwas called the “Spanish flu” only because, while the United States, Britain and France were all censoring news about the spread of the pandemic in their countries to maintain domestic morale, the press in neutralist Spain was reporting freely on influenza cases there. In fact, the first major wave of infections in the United States came in U.S. training camps set up to serve the war.

Abundant documentary evidence shows that the 1918 pandemic actually began in Haskell County, Kansas, in early 1918, when many residents came down with an unusually severe type of influenza. Some county residents were then sent to the Army’s Camp Funston at Ft. Riley, Kansas, the military’s largest training facility, training 50,000 recruits at a time for the war. Within two weeks, thousands of soldiers at the camp became sick with the new influenza virus, and 38 died.

Recruits at 14 of 32 large military training camps set up across the country to feed the U.S. war in Europe soon reported similar influenza outbreaks, apparently because some troops from Camp Funston had been sent there. By May 1918, hundreds of thousands of troops, many of whom were already infected, began boarding troopships bound for Europe, and the crowding onboard the ships created ideal conditions for the virus to explode further.

In the trenches in France, still more U.S. troops continued to be sickened by the virus, at first with milder illness and relatively few deaths But the war managers simply evacuated the sick and brought in fresh replacements, allowing the virus to adapt and mutate into more virulent and more lethal strains.

The consequences of that approach to the war became evident after the August 27 arrival in Boston harbor, when visitors brought a much more virulent and lethal strain of the virus; it quickly entered Boston itself and by September 8, had appeared at Camp Devens outside the city. Within ten days, the camp had thousands of soldiers sick with the new strain, and some of those infected at the camp boarded troops ships for Europe.

Meanwhile the lethal new strain spread from Camp Devens across the United States through September and October, ravaging one city after another. From September onward, the U.S. command in France, led by Gen. John Pershing, and the war managers in the War Department in Washington, were well aware that both U.S. troops already in Europe and the American public were suffering vast numbers of severe illnesses and death from the pandemic.

Nevertheless, Pershing continued to call for large numbers of the replacements for those stricken at the front lines, as well as for new divisions to launch a major offensive late in the year. In a message to the War Department on September 3, Pershing demanded an additional 179,000 troops.

The internal debate that followed that request, recounted by historian Carol R. Byerly, documents the chilling indifference of Pershing and the military bureaucracy in Washington to the fate of American troops they planned to send to war. After watching the horror of lethally-infected soldiers dying of pneumonia in the infected camps, acting Army Surgeon General Charles Richard strongly advised Army Chief of Staff Peyton March in late September against sending troops from the infected camps to France until the epidemic had been brought under control in the surrounding region, and March agreed.

Richard then asked for stopping the draft calls for young men heading for any camp known to be already infected. March wouldn’t go that far, and although the October draft was called off, it was to resume in November. The War Department acknowledged the heavy toll the pandemic was taking on U.S. troops in October 10, informing Pershing that he would get his troops by November 30, “if we are not stopped on account of Influenza, which has now passed the 200,000 mark.”

Richard then called for troops to be quarantined for a week before being shipped to Europe, and that the troopships carry only half the standard number of troops to reduce crowding. When March rejected those moves, which would have made it impossible for him to meet Pershing’s targets, Richard then recommended that all troop shipments be suspended until the influenza pandemic was brought under control, “except such as are demanded by urgent military necessity.”

But the chief of staff rejected such a radical shift in policy, and went to the White House to get President Woodrow Wilson’s approval for the decision. Wilson, obviously recognizing the implications of going ahead under the circumstances, asked why he refused to stop troop transport during the epidemic. March argued that Germany would be encouraged to fight on if it knew “the American divisions and replacements were no longer arriving.”Wilson then approved his decision, refusing to disturb Pershing’s war plans.

But the decision was not carried out fully. The German Supreme Command had already demanded that the Kaiser accept Wilson’s 14 points, and the armistice was signed on November 11.

The disastrous character of the U.S. elite running the First World War is clearly revealed with the astonishing fact that more American soldiers were killed and hospitalized by influenza (63,114) than in combat (53,402). And an estimated 340,00 American troops were hospitalized with influenza/pneumonia, compared with 227,000 hospitalized by Germans attacks.

The lack of concern of Washington bureaucrats for the well-being of the troops, as they pursue their own war interests, appears to be a common pattern—seen too, in the U.S. wars in Vietnam, Afghanistan and Iraq. Now it has been revealed once again in the stunningly callous response of the Pentagon to the coronavirus pandemic crisis.

In the 1918 war, there was no protest against that cold indifference, but there are now indications that the families of soldiers put being at risk are expressing their anger about it openly to representatives of the military. In a time of socio-political upheaval, and vanishing tolerance for the continuation of endless war, it could be a harbinger of accelerated unraveling of political tolerance for the war state’s overweening power.

How Generals Fueled 1918 Flu Pandemic to Win Their World War