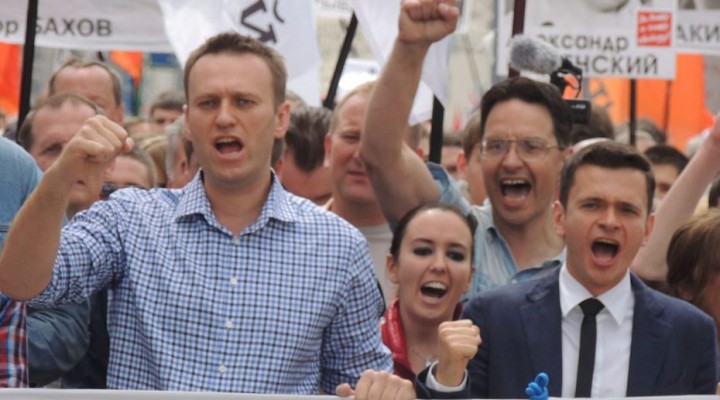 Britain’s Prime Minister Boris Johnson is the latest Western leader to wildly jump on the bandwagon claiming that Russian opposition figure Alexei Navalny was poisoned, and by implication insinuating the Kremlin had a sinister hand in it.

“The poisoning of Alexei Navalny shocked the world,” asserted Johnson on Twitter, who went on to call for a “transparent investigation” to find the perpetrators. The British premier didn’t explicitly finger the Russian authorities, but that was what he implied.

It’s amazing how Boris Johnson, wracked by the political disaster of his sheer incompetent mishandling of the coronavirus pandemic in Britain, somehow has the time and “authority” to poke into Russian affairs.

Johnson’s rush to judgement replicates other Western leaders who have concluded without any evidence that Navalny was poisoned in a malicious way. U.S. Secretary of State Mike Pompeo has said he backs the European Union’s call for a comprehensive investigation. Germany Chancellor Angela Merkel not only referred to Navalny’s condition as “poisoning” but also a “crime”.

Boris Johnson’s intervention is reminiscent of how he accused the Kremlin of poisoning former MI6 spy Sergei Skripal in March 2018 within days of that incident. Johnson was then the UK’s foreign minister. What actually happened to Skripal and his daughter Yulia in the English city of Salisbury remains a mystery since the pair have not been seen or heard of since. Presumably, they are in the custody of the British authorities, who have denied all international norms by not allowing Russia consular access to at least one of its citizens.

As with the Skripal case, the reflexive response among Western governments and media is to accuse Russian authorities of malign involvement in the case of Navalny. Demanding an investigation by the Russian government indicates a high-handed presumption to interfere in Russian internal affairs. It also indicates a Western prejudice to criminalize Moscow over any incident.

As soon as Navalny was hospitalized after apparently being taken ill during a flight last week from the Siberian city of Tomsk to Moscow, Western media headlines immediately inferred it was the result of sinister play. “Putin critic” was ubiquitous in headlines, as were unfounded claims of “poisoning” from drinking tea. (Russian trope alert.)

The Russian doctors who treated Navalny said there was no evidence of poisonous substance found in his body. They said his seizure may have been caused by a fatal drop in blood sugar levels. He is reportedly diabetic. So, from what we can tell, the Russian doctors appear to have saved Navalny’s life by their rapid response, but they were unable to make a precise diagnosis. What then merits Western demands for an investigation by the Russian authorities?

Here is the strange twist in the story. Two days after being treated in Russia, Navalny is airlifted on Saturday, August 22, by a private jet to a hospital in Germany, where he continues to reside, reportedly in a coma, which is not life-threatening. The doctors in the Charité hospital in Berlin release a vague statement claiming that it is “likely” he has been “poisoned”. They cite the presence of “cholinesterase inhibitors” in his body as evidence of “poisoning”.

Therefore, what we have is a hasty assessment by the German doctors who make a dramatic conclusion, which the Russian counterparts do not, even though both teams were working on the same clinical sample information. Surely, that is unprofessional and unethical on the part of the German medics.

It would appear that the doctors at the Berlin hospital share the same mental condition as Boris Johnson, Angela Merkel and Mike Pompeo. That is, a condition of condemning Russia before any evidence is in. Then let the media pile on the propaganda tropes and “history” of “assassinations” by “Kremlin poisoning”

The curious question is: why did the Russia authorities permit the private transport of a Russian citizen out of the country at a time when he was in a serious medical condition? Was the Russian government unnerved by the media accusations of foul play against a dissident figure who has been lionized by the West as some kind of political hero? Did they feel the need to be excessively “open”?

Alexei Navalny, despite his high-profile among Western media, is a minor figure in Russian politics. His so-called anti-corruption campaigns have negligible interest for most ordinary Russian citizens, and minimal political impact for the Russian government. In short, Navalny is a professional gadfly whose importance is blown out of all proportion to its reality by Western media. There is nothing to gain for the Russian authorities in causing injury to this person, assuming that such a malicious event might even be considered.

That may well explain why Russian officials assented to Navalny being airlifted to Berlin, knowing full well that his medical condition was not caused by anything pertaining to deliberate, sinister action. Still, that decision by the Russians seems an odd concession over a matter of sovereignty. It’s doubtful that the Americans, British, Germans or others would have followed a similar course for one of their citizens being take abroad, especially one who could be exploited for propaganda value.

Surely, Moscow did not underestimate the mentality of Russophobia which Western politicians suffer from? The cardinal rule is never give hostages to fortune when dealing with buffoons like Britain’s Boris Johnson. It looks like Navalny is now one such hostage to anti-Russian fortune.

Is Trump Being Blackmailed?