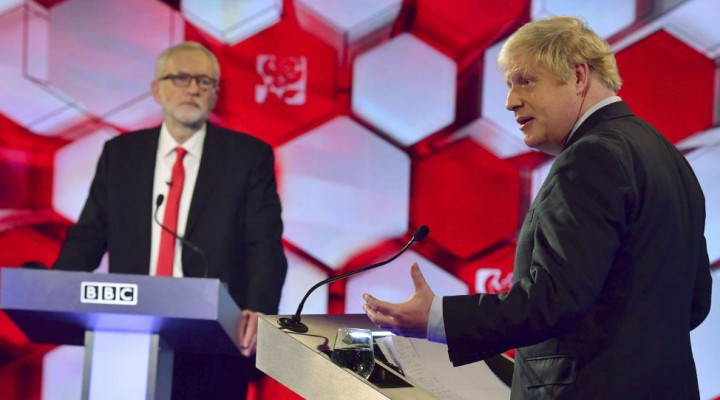 The issue of Brexit has decisively won the day in England and Wales. But for Scotland and Northern Ireland – the other two nations that make up the United Kingdom – voters have become even more entrenched in their opposite position to remain in the European Union.

Britain is cut in half. The pro-remain Scottish nationalists have increased their dominance, taking over 80 per cent of parliamentary seats in Scotland. Leader Nicola Sturgeon says the victory shows Scotland rejects Brexit and will now push for a second referendum for independence from Britain.

Meanwhile, in Northern Ireland the pro-remain nationalist parties are now in a majority for the first time ever, after voters turned their backs on Brexit-supporting unionists.

How Boris Johnson reconciles those polar opposites in his “One Nation Tory” vision will be something of magic trick.

Johnson did triumph in the general election this week – if we limit focus to results in England and Wales. The prime minister was re-elected and his Conservative party won a comfortable majority of around 70 lawmakers. He can now press on with his vow to “get Brexit done” by January 31.

Most of the Conservative gain was made by taking seats from Labour. It was a disastrous election for Labour and its leader Jeremy Corbyn who has now given notice of his resignation.

The seismic shift in the electorate was seen in traditional Labour heartlands, the working-class regions of the North and Midlands of England, as well as Wales, giving their votes to the Conservatives.

Some of these constituencies had never before voted for the Tories, commonly viewed as the party of “Eton toffs” and ruling establishment.

It was Brexit that drove the sea-change in England and Wales. Many of the working-class traditional Labour supporters had voted to leave the European Union in the 2016 referendum. Their switch to Johnson’s Conservatives in this election was won over by his promise to deliver Brexit.

Johnson had a clear message: “Get Brexit done”. Repeated over and over again. Whereas Labour were split between leave and remain. Jeremy Corbyn’s offer to hold a second referendum on Brexit ended up losing the party’s leave supporters who saw it as a betrayal. In a complicated situation, the more concise message usually wins out.

During the election campaign, Labour made valiant efforts to promote public debate on wider social and economic issues, away from the singular, divisive issue of Brexit. A massive public investment program to renew impoverished communities and services appeared to have popular appeal.

But it was the watershed issue of Brexit that kept emerging. Partly because of Boris Johnson’s catchy mantra about getting it done. It has to be recognized that Labour’s leave voters agreed with that. Also many voters were simply weary with the never-ending Brexit debacle.

There can be no doubt too that the predominantly pro-Tory media (80 per cent of national media) succeeded in making Corbyn a toxic figure for many voters. Relentless headlines about the Labour leader being a “national security threat”, a terrorist sympathizer and antisemite, and how his “Marxist manifesto” would destroy the economy – all of those distortions constantly pumped out by the vicious rightwing media had a hugely damaging impact on voter perceptions.

It really is astounding that communities ravaged by austerity and poverty inflicted by past Conservative governments should end up voting for another five years of Tory rule. That anomaly is a measure of how confounding the Brexit issue has become in British politics.

In any case, there is no taking away from Boris Johnson’s victory and the “powerful mandate”, as he puts it, to push on with leaving the European Union. He says this will be happen on January 31. But it is not so much a case of getting Brexit done than rather getting Brexit “started”. His majority government may now get the legislation through to leave on the British side at the end of January, but there will still be months of protracted negotiations with the European Union in order to finalize the departure.

Johnson’s Conservative government will also be challenged to respond to the urgent needs of impoverished communities who have backed his re-election on the basis of Brexit, and certainly not on the basis of the usual pro-rich, elitist social and economic policies of the Tories. If Johnson wants to retain their support, his party is going to have to radically rethink its policies in order to genuinely create the “One Nation Toryism” that he speaks of. There is a fair chance, however, that the Conservative tiger will not change its stripes, and thus working-class voters will be betrayed even more by continuation of callous policies.

So, the Conservative election victory is far from a resolution. Yes, the Brexit process may finally get started, after three years of delay. But the mandate that Boris Johnson has won has its limits. He may have won the day in England and Wales, but the other half of the United Kingdom – Scotland and Northern Ireland – is heading in an opposite direction. A direction which is increasingly challenging the four-nation union of the UK.

0 thoughts on “UK Divided More Than Ever”