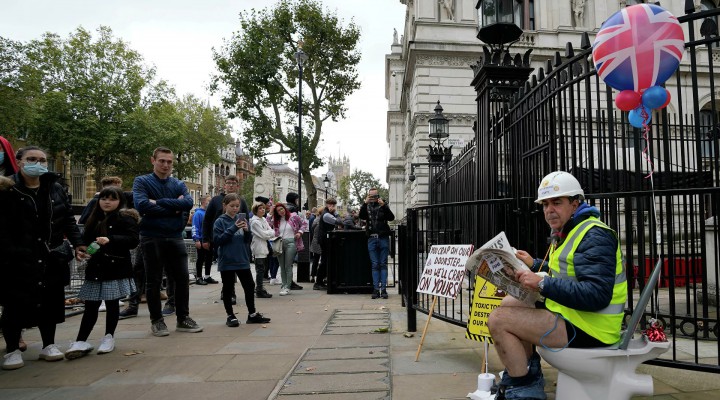 In one of the most famous speeches in English literature, from Shakespeare’s Richard II, England is eulogized as a “Sceptered Isle” – supposedly meaning how it is uniquely blessed. But with England’s rivers and coastal waters facing a crisis from raw sewage contamination, the bard’s words might be updated to “this Septic Isle”.

You could hardly make it up, so appalling it is. Britain is believed to be the only country in continental Europe where the government has actually given permission to industries and water management companies to release untreated waste into rivers and seas.

Due to these supply problems, Boris Johnson’s Conservative government has given the go-ahead for businesses to pump raw sewage into natural waterways.

Conservation groups and public health experts are now condemning Johnson’s government for what they say amounts to turning rivers and coastal waters into “open sewers”.

You couldn’t get a more damning metaphor for the rebounding impact of Brexit. Supply shortages and empty shelves have been across the board as a result of the United Kingdom bailing out of the EU. Downing Street and Brexit supporters claim that the problems are “only” short-term adjustment hitches before “Global Britain” goes on to a glorious future – as in the days of yore when it had an empire.

But back to reality: rivers running brown from sewage as a short-term glitch? It sounds more like Brexit ambitions have hit the fan. Is this meant to be “taking back control” from Brussels and reclaiming “sovereign independence”? Taking back control to dirty your own nest more like it.

The laugh here is this week sees Boris Johnson convening the COP26 international conference. US President Joe Biden and some other world leaders are to attend the summit which is billed as saving the planet from ecological disaster.

Of course, it is an empty PR exercise by Johnson to try to promote Britain as a world leader.

How is anyone supposed to take the British prime minister seriously about saving mankind from climate-change disaster when his government is willing to drown its own people in toxic water?

It all gets back to dirty money of course. The British parliament last week voted against imposing a legal duty on businesses and water management firms to take measures to clean up waste water. The majority of Conservative MPs claimed that the duty would “cost too much”. That is sort of correct. It is estimated that to upgrade Britain’s “Victorian-era” sewerage system it would cost between £150 and £650 billion ($200-$900 bn).

Rather than that being an excuse for voting against water quality control laws, it is an abject admission of chronic neglect under successive British governments. Why should Britain have “Victorian-era” sewers in the first place? That is, encumbered with creaking infrastructure for vital public health which is over a century old.

The problem of chronic neglect has been made all the more worse under Conservative governments since Margaret Thatcher which have privatized the management of public water. Profit-making firms have simply cut back costs by neglecting upgrades of infrastructure.

Now that Britain has left the EU, it is no longer obliged to adhere to laws governing water quality standards. To protect private profit, the Johnson government is simply letting businesses open the sluice gates for sewage and other waste water to flow into the public spaces. It’s classic capitalism. Offload costs on to the public to maximize private profit.

Back in 2018, Britain’s then environment minister Michael Gove – one of Johnson’s Brexit “geniuses” – claimed that leaving the EU would not jeopardize Britain’s drinking water supplies. He implied that rivers and seas would be cleaner from London having independence from Brussels.

Last year, there were 400,000 incidents of raw sewage pouring into English natural waterways – up from 300,000 incidents in 2019. The trend is only going to get worse in the light of new moves by the Johnson government to gut any remaining quality controls.

Like much else claimed about the “glories of Brexit”, the mounting crisis over British water pollution demonstrates that Johnson and Co are full of fecal material.

By the way, Shakespeare’s eulogy for England was qualified. It also was an oblique censure to the rulers of the day for selling out sovereignty for grubby self-interests. Johnson and Co probably think they are of Shakespearian finest in their supposed patriotism. The bard would appreciate the stinking irony.