The Depth of US Cold War Thinking and Murder of JFK 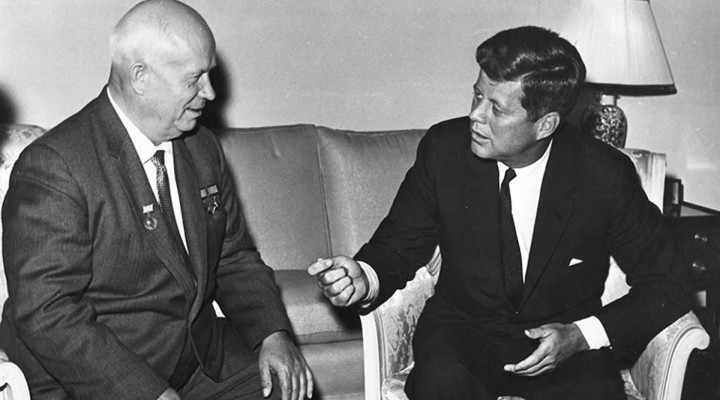 It seems almost incredible that 30 years after the supposed end of the Cold War, we have a situation in Europe today where the United States and its NATO allies are risking a war with Russia.

Moscow says it has no intention to go to war against the United States and the 30-member NATO military bloc, nor has it plans to invade Ukraine. Yet Washington and its allies keep talking hysterically about Russia “imminently” attacking Ukraine. With such tinderbox tensions and deranged paranoia, the danger of war is lamentably all too real.

The intransigence of the US and NATO to negotiate a mutual security arrangement with Russia for Europe is a clear sign that Cold War logic is still dominant among the Western powers. Russia is not viewed as a nation with which to have normal relations for trade, commerce, diplomacy and security. On the contrary, it is viewed relentlessly through a lens of hostility and enmity. Why is that?

“In my opinion, it is a myth that the Cold War ended with the collapse of the Soviet Union. The Cold War from the beginning was always about U.S./Western hegemony”, says Schotz, the author of History Will Not Absolve Us: Orwellian Control, Public Denial, and the Murder of President Kennedy.

He explains that the US national security state and its hyper-militarized economy absolutely need to have foreign enemies in order to justify their existence.

“Weapons of war have nothing to offer mankind as it faces the threats posed by environmental destruction. Yet the American people continue to allow billions and billions of dollars to be spent on such weapons, all of this rationalized by a false Cold War narrative”.

This deeply entrenched logic instilled by the US ruling establishment is almost inseparable from the modern formation of the American nation-state. The Cold War which began immediately after the Second World War is a dogma that Washington imposes not just on its own people but on its NATO and European allies whose weak leaders are all too willing to comply with.

American corporate capitalism is in essence a war economy. It is driven by the military-industrial complex and its outgrowths in Congress, Wall Street, myriad think-tanks and the corporate-controlled news media. It means that international relations and US foreign policy must necessarily be distorted through a prism of conflict and war. The corollary of that mentality is the reality of Washington’s war-making record over the past eight decades. No other nation comes close to its trail of criminal aggression and destruction from non-stop wars or overseas violent “interventions”.

Thus, the present tensions over Ukraine and alleged Russian aggression have to be viewed in the context of Washington’s permanent Cold War ideology. The same can be said with regard to US accusations against China and Taiwan.

The accusations against Russia and China should be taken with a contemptuous pinch of salt since they are issued by an entity – the United States – whose war-criminal record is incomparable.

Martin Schotz says there is no doubt that President Kennedy was murdered in Dallas on November 22, 1963, by the US ruling establishment because of his growing radical opposition to Cold War policy. The vast coverup from the absurd Warren Report to the ongoing blanket mass media denialism all point incontrovertibly to an orchestrated state agency.

Says Schotz: “In 1963, President John F. Kennedy made a radical turn away from war and initiated a process of peaceful coexistence with the Soviet Union. As part of this process, he made a speech at the American University, Washington DC, in June of 1963 which was a profound attempt to educate the people of the United States about world peace and to outline a path out of Cold War thinking. The concepts and principles that the president articulated are as true and valuable today as they were in 1963. At the time that this speech was delivered it so impressed Soviet leader Nikita Khrushchev that he had it reprinted throughout the Soviet Union. Unfortunately, the speech was and is very little known by the people of the United States”.

JFK called for a process of nuclear disarmament and peaceful coexistence with the Soviet Union based on recognition of mutual humanity. Such a call, however, was anathema to the US military-industrial complex and the national security state. It was in this frenzied context that the state tacitly ordered executive action to kill Kennedy.

To quote from Schotz’s book: “As citizens who have turned away [now nearly sixty years] from the truth of the murder of our elected head of state, we should not be surprised that today we find our nation in intellectual, political, and moral chaos. Confronting the truth of President Kennedy’s assassination and its coverup is but one small step on a long path out of that chaos and toward healing, a path along which we must confront the true nature of our democracy and the reality of what our nation has become for its own citizens and for people throughout the world. Such a process of healing is not pleasant. It is a difficult and painful path, but it is a necessary one. History will not absolve us”.

The fact that an elected US president was brutally murdered in broad daylight simply because he wanted to make peace with the Soviet Union and banish the horror of war that shows how deep and nefarious is the Cold War logic of the American ruling establishment. Now, as it was then.

It is therefore totally consistent, if condemnable, that the United States continues to find ways to incite animosity with Russia, China and others even to the heinous point of risking a nuclear war. The root problem of securing a peaceful world stems from the inherent, criminal nature of the US national security state and its war-driven economy.

The murder of JFK is not some distant event of wicked intrigue. It is a crime that haunts the US and the rest of the world to this day. Until the United States deals with that crime, it will never be at peace.

Thirty years on, I miss the ‘Evil Empire’