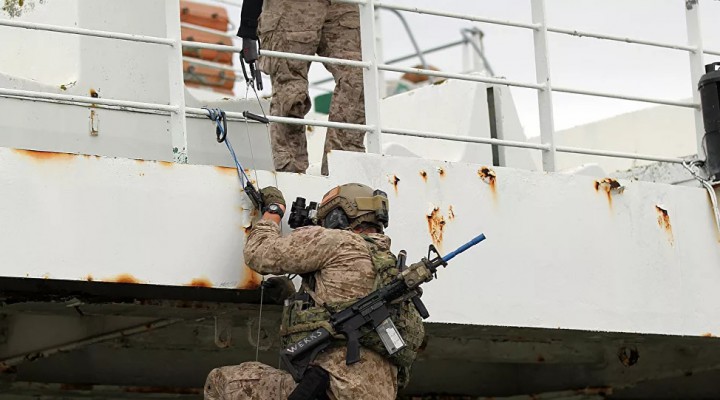 NATO defense ministers were this week reportedly trying to thrash out a new, updated mission for the military alliance. Less charitably, the organization is desperately seeking to find a purpose for its continuing existence.

The 30-nation military bloc has a combined annual spend of over $1 trillion, with the United States accounting for nearly three-quarters of that budget, allocating around $740 billion alone on its military.

The videoconference held this week is the first time that the new Biden administration has officially engaged with NATO allies. Lloyd Austin, the US Secretary of Defense, addressed the forum to lay out President Biden’s supposed priority of reinvigorating relations with allies, which had become frayed during the previous Trump administration.

But the message sounds pretty much like the same old Washington mantra: NATO members have to spend more, more, more in order to counter the alleged threats from Russia and China. It’s like listening to a broken record or digital loop.

The only difference is one of style, not substance. Whereas Trump was abrasive and acerbic in telling NATO members to cough up, the Biden administration is more polite in its rhetoric, cooing about the importance of the “transatlantic partnership” and promising to be more collegiate in strategic decision-making.

Essentially, however, it’s the same old racket of America goading European nations to spend more money to prop up the military-industrial complex which is the life-support machine for defunct capitalism. The Americans need Europeans to keep buying their warplanes and missile systems in order to keep US capitalism functioning.

It’s quite a tough sell though, in this global climate of economic hardships and immense, burgeoning social challenges. How to justify spending $1 trillion every year on non-productive war machines?

Well, of course, the cheerleaders for NATO – principally the Americans – have to reinvent enemies like China and Russia in order to justify the existence of such an extravagant militarized economy which would otherwise be rightly seen as an insanely detrimental drain on nations’ resources.

Nevertheless, the bogeyman charade has increasingly serious conceptual shortcomings. First and foremost it is not true: neither Russia nor China are enemies seeking to destroy Western nations. Secondly, the charade does not stand up to logic. The total NATO military spend is about four times the combined budgets of Russia and China. Yet we are expected to believe that these two countries are threatening a bloc of 30 nations despite the former spending a fraction on military.

Another conceptual problem for NATO salesmen is that the organization was born nearly eight decades ago at the start of the Cold War. Today’s world is vastly different, reflecting an increasing multipolar integration of economies, politics and communications.

Just this week, new trade figures show that China has overtaken the United States as the number one trading partner with the European Union.

China, Russia and the trend of Eurasian economic cooperation is the future of global development.

And the Europeans – despite still occasional deference to Washington – know that. At the end of last year, the European Union concluded a landmark investment accord with China which came about in spite of Washington’s objections.

Indeed, the days are numbered for America bullying and extorting its NATO allies through peddling scary stories about foreign enemies. The world can no longer afford such crass wasting of resources amid so many other more important social needs. It is becoming politically impossible to continue selling the NATO racket.

The “evil world” depicted by American conspiracists/politicians does not correspond to the reality that most other people can recognize. Yes, there are diehard Cold War mindsets lurking in Europe, such as NATO’s Secretary General Jens Stoltenberg and the Russophobic politicians of Poland and the Baltic states. But they a flaky minority on the margins.

Common sense awareness among most citizens is exposing NATO to be a relic of the past that has no purpose in today’s world and with all its pressing social needs. Germany and France, the most powerful drivers of Europe’s economy, are less enamored with Washington, even under a seemingly more friendly Democrat president.

The Biden administration may sound slightly more plausible and genial compared with its Trump predecessor. But demanding others to spend more on useless militarism and to antagonize vital trading partners China and Russia is mission impossible for the US-led NATO. The contradictions in NATO’s cognitive dissonance with the real world are so palpable it is no longer credible nor viable as an organization.