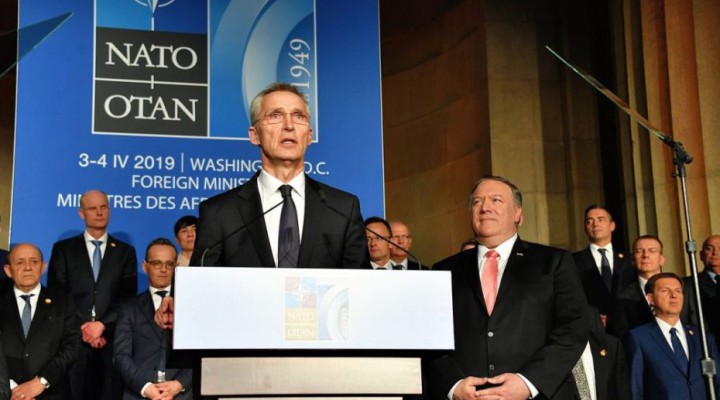 NATO’s loss of credibility is symbolic of the change in the world order, where the West no longer has any option other than to acknowledge today’s multipolar reality.

Recent statements by NATO leaders have cast a pall over the globalist elite. Macron recalled how Erdogan armed and supported terrorist groups in Syria linked to Daesh, who were fighting against ethnic groups like the Kurds with whom France has cooperated. Erdogan in turn threatened to veto NATO’s efforts to strengthen its military posture in the Baltic countries to face off against alleged Russian “aggression”.

The most serious statement made by a NATO leader came from Macron claiming that NATO was experiencing a “brain death”, prompting Trump to claim that “the French economy is in ruins” and describing Macron’s words as “very nasty”. Erdogan, not to be outdone, offered his own assessment of Macron’s own “brain death”.

The often incoherent and incomprehensible behavior of Erdogan, Macron and Trump stems from being compelled to dialogue with Putin in virtue of Russia’s role in regard to international treaties on nuclear weapons as well as its role in Syria, Libya and Iran together with its relations with the EU and the Franco-German axis.

NATO members’ schizophrenia lies in the inability of countries like the United States, Turkey and France to advance a truly multipolar foreign policy, where the pragmatic realism of some leaders obliges them to engage with Moscow even as they simultaneously make belligerent declarations against it in support of Eastern European countries.

Russia is central to the Middle East thanks to the triple role played in Syria. It carries out peace-keeping operations in the north-east of the country, effectively cooperating with Erdogan’s Turkey; the anti-terrorist operations continue in Idlib, alongside the legitimate government of Damascus, with the airspace well guarded against French, Israeli or American efforts to hobble the movements of the Syrian Arab Army. The leaders of France, Turkey and the US, in spite of having differing aims and objectives from those of Moscow, have no choice but to enter into dialogue with Putin in order to avoid any dangerous confrontations in an already complex and volatile region.

NATO has no chance of playing a leading role in this context, which is why the US and Israel dreamed of creating a Middle Eastern NATO consisting of Washington’s closest allies in the region, to be used use cannon fodder against Iran and her allies in the region. Once this goal failed, the original NATO continued to lose importance and significance in the region and beyond.

NATO’s official statements therefore increasingly carry less and less weight and significance, as the leaders of the alliance’s main members then proceed to advance diverging or opposing policies and actions.

The last, desperate attempt by Brussels to try and revitalize NATO was to propose to wield the alliance against the People’s Republic of China and its Belt and Road Initiative, even making an awkward attempt to involve Russia, in the hopes of driving a wedge between the two Eurasian giants, just as the Power of Siberia pipeline, one of the most important energy projects in the world, guaranteeing China’s LNG supply from Russia, comes into operation.

Western elites are well aware that the unification of the military, economic and political aspirations of Moscow and Beijing, with the possible future addition of the Franco-German axis, would spell the end of Washington’s hegemonic aspirations.

NATO is now old hat, having become of no strategic significance and no longer able to affect the global geopolitical balance. The real reason why NATO continues to exist is so that the Euro-Atlantic military-industrial complexes can continue to feed off the teat of the public purse; that and the need to keep European countries under Washington’s political and military tutelage.

The Franco-German proposal to create a European army can therefore be seen as an attempt to come out from under Washington’s heel in order to advance an independent, clearly defined military role that recognizes the multipolar era win which we live.

Moreover, Moscow and Beijing have been able to surpass NATO in such areas as hypersonic weapons, air defense, and new weapons systems for nuclear deterrence precisely because they do not suffer from the same types of corruption in their procurement and manufacturing processes as well as from the need to constantly feed an insatiable military-industrial complex, including the pressure to award contracts to American over European manufacturers.

NATO’s loss of credibility is symbolic of the change in the world order, where the West no longer has any option other than to acknowledge today’s multipolar reality.

NATO will only continue to further delegitimize its global role as long as it continues to try to undermine Moscow and Beijing’s expansion, inadvertently pushing allies like Turkey to question their own future within the Atlantic alliance.

0 thoughts on “NATO Becomes Schizophrenic as It Loses Credibility”