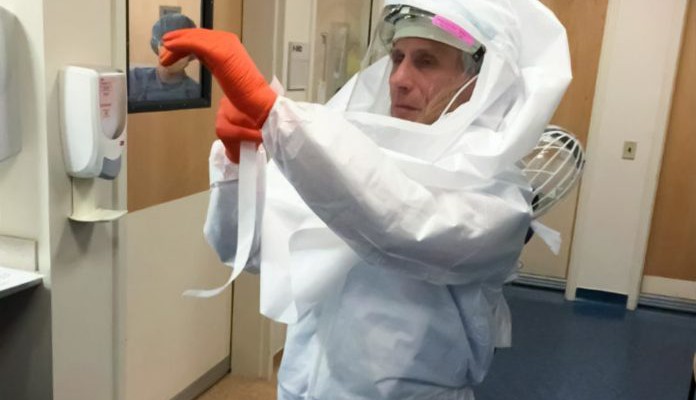 The US National Institutes of Health (NIH) has continued funding risky gain-of-function research (GoF) on potential pandemic pathogens, newly disclosed information reveals. The US government medical research agency has funded scientists to study avian influenza (bird flu) which does not transmit among humans. However, the NIH projects aim to make avian influenza viruses able to transmit among mammals and assess their pandemic potential as a possible threat to humans.

Gain-of-function (GOF) studies improve the ability of a pathogen to cause disease by increasing its virulence and transmissibility. These dangerous experiments have not been terminated even though COVID-19 has been suspected to be the result of such NIH-funded GoF research in the Wuhan Institute of Virology.

Instead of terminating all GoF research since the pandemic started NIH and its sub agency – the National Institute of Allergy and Infectious Diseases (NIAID), have continued their financial support for the following GoF studies: Transmissibility of Avian Influenza Viruses in Mammals (NIAID support ended in August 2021); Centers of Excellence for Influenza Research and Surveillance (CEIRS) (NIAID support ended in March 2021). The third one: Mimicking evolution to define mechanisms of airborne transmission of H7N9 viruses, started on 2nd September 2021 and is ongoing.

H5N1, a highly pathogenic avian influenza virus, does not transmit among mammals. The researchers aim to make the virus able to transmit in order to assess its pandemic potential.

According to the project’s description, “no sustained human-to-human transmission has yet been reported. Several attempts in the past to select transmissible H5 viruses (which typically do not transmit among mammals) were not successful”. That is why the researchers “plan to passage non-transmissible viruses of different genetic backgrounds in ferrets (an established influenza virus transmission model) to select transmissible mutants”. Selected mutations will be characterized for their biological effects and the potential of H5N1 to transmit in mammals.

The project includes studies on animal influenza viruses with pandemic potential. No further information has been provided.

According to the description provided for Project 1R21AI144135-01: “The Asian lineage H7N9 avian influenza viruses (AIV)… have not spread in humans; however, there is a high potential for these viruses to evolve to transmit via the airborne route and cause a pandemic… Viruses carrying the H7N9 HA and NA on the A/PR8 vaccine backbone will be generated. Mutations will be introduced into the HA and NA gene segments…we will evaluate the replication kinetics of recombinant H7N9-A/PR8 viruses for their growth in primary human airway epithelial cells. Primary human cells will include nasal, tracheal, bronchial, and small airway epithelial cells.” The researchers want to make the virus able to transmit via the airborne route in order to assess the pandemic potential of H7N9 viruses.

These last NIH-funded experiments are just a small part of many controversial lab studies approved by the agency. One of them was the risky bat coronavirus research in China which is under investigation in the US for a possible link to the COVID-19 pandemic.

Despite repeated denials from NIAID director Dr. Antony Fauci including before Congress, NIH finally acknowledged last year that US did fund GoF research on bat coronaviruses in Wuhan from where the pandemic started and spread across the world. The $3.7 million grant was awarded to the US non-profit organization EcoHealth Alliance. In a  letter to U.S. House of Representatives NIH states that EcoHealth Alliance violated Terms and Conditions of NIH grant AI110964 and failed to report all its activities in China. According to the NIH letter, a “limited experiment” was conducted in order to test if “spike proteins from naturally occurring bat coronaviruses circulating in China were capable of binding to the human ACE2 receptor in a mouse model.”

This is much bigger than Dr. Fauci – it involves the entire US government: US Congressman

Following the release of a House Intelligence Committee report stating that “significant circumstantial evidence” supports the lab leak hypothesis, Rep. Mike Gallagher urged members of Congress and members of the media to more closely scrutinize additional US funding streams that sent taxpayer dollars to EcoHealth Alliance. According to the congressman, “If you start to do basic research, it quickly becomes apparent that this is much bigger than Dr. Fauci – it involves the entire US government”.

EcoHealth Alliance has received $112.1 million in total in US government funding since 2003, according to information obtained from the US federal contracts registry. Among its main sponsors are NIH through NIAID and the Pentagon through the Defense Threat Reduction Agency (DTRA). The projects’ objectives are discovery and assessment of viruses with pandemic potential mainly in Africa and Asia. 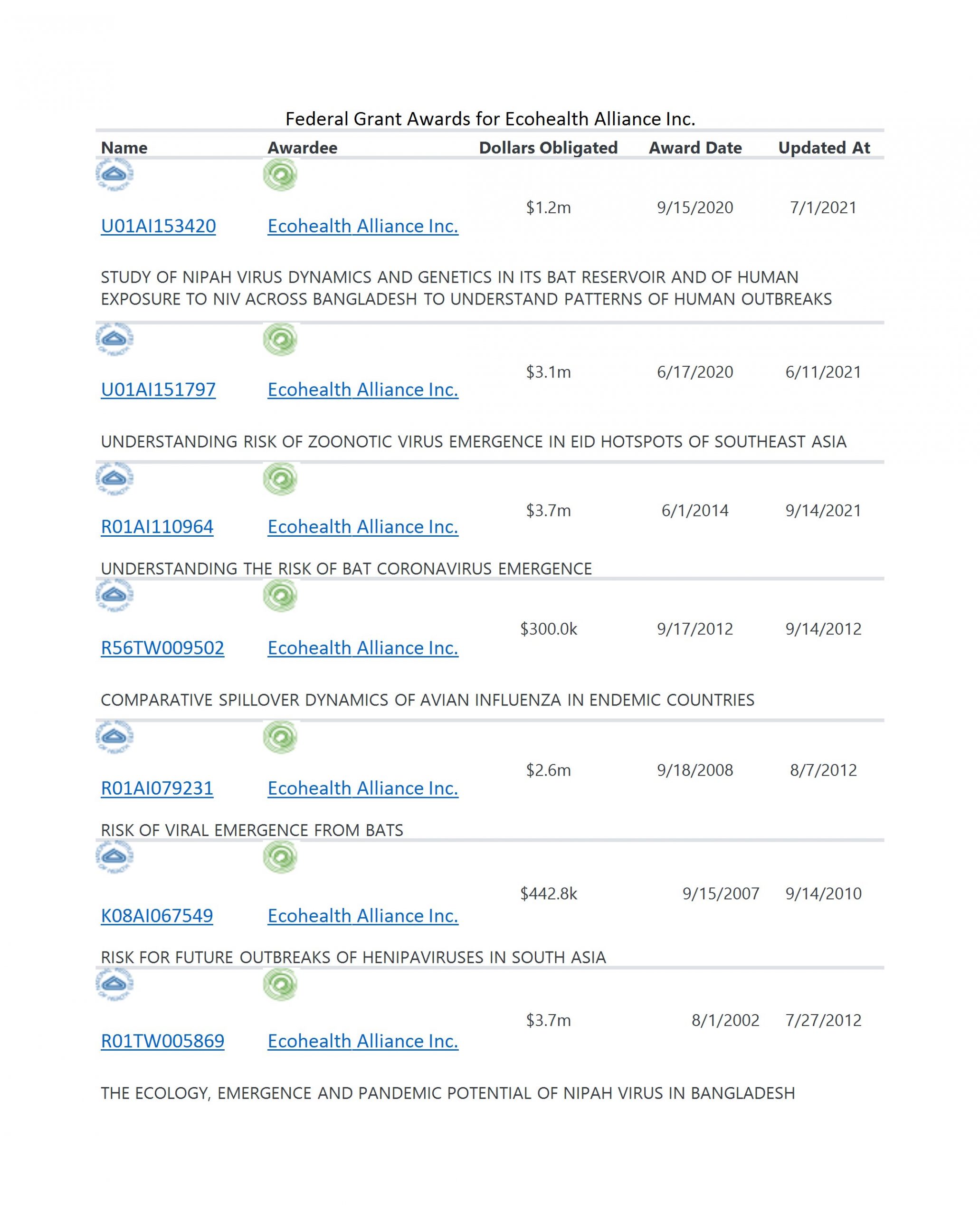 EcoHealth Alliance has implemented a number of military biological research programs for the Pentagon. In 2017 the US Defense Threat Reduction Agency (DTRA) tasked EcoHealth Alliance with a $6.5 million project to collect and isolate coronaviruses in 5,000 bats in Western Asia. The duration of the program is 5 years (2017-2022) with the Lugar Center, the Pentagon biolaboratory in the Republic of Georgia, being the local laboratory for this genetic research.

The Lugar Center which is the partner laboratory for this research is a $180 million Pentagon biolaboratory in Georgia’s capital Tbilisi. It has been operated by a special US Army Unit – USAMRU-G, whose personnel have been given diplomatic immunity to research viruses without being diplomats.

The Lugar Center has become notorious in the last years for controversial activities, laboratory incidents and scandals surrounding the US drug giant Gilead’s Hepatitis C program in Georgia which has resulted in at least 248 deaths of patients. The cause of death in the majority of cases has been listed as unknown, internal documents have shown.

There is no public information about the results of the research performed by EcoHealth Alliance at the Lugar Center for the Pentagon neither what viruses have been discovered and what genome experiments have been performed.

The State Security Committee of South Ossetia raised awareness about the EcoHealth Alliance bat research project in neighboring Georgia after a Georgian national Khvicha Mgebrishvili was detained on 3 July 2020 near the village of Adzisar in the Tskhinvali region of South Ossetia for violating the state border. During the interrogation by South Ossetian KGB border officers, he explained that he was interested in a colony of bats in the villages of Artseu and Grom in the Tskhinvali region. According to Mgebrishvili, he intended to capture the so-called “Bat cocoons” and sell them in Georgia for $5,000 each. These species are listed in the Red Book and hunting them is punishable by prison in South Ossetia.

Local authorities accused neighboring Georgia of suspicious activities stating that “the Lugar Center for Public Health Research has shown increased interest in the population of South Ossetian bats since 2012”. As always the Lugar Center and the US Embassy in Tbilisi denied all allegations as fake news and a conspiracy theory.

In response to all scandals surrounding the Lugar Center and the growing distrust among Georgians the US Embassy in Tbilisi has launched a propaganda campaign to educate the local population with animated movies on social media and Georgian TV channels. All information concerning the Lugar Center apart from the official government narrative has been branded as “fake news”, “disinformation” and “conspiracy theories”. The Lugar Center has been given by Western media as an example in the fight against the novel coronavirus even though COVID-ravaged Georgia ranks seventh in the world among the countries with the highest number of deaths per million as of this month.