HOME / SOCIAL/CULTURAL / Who Wants To Hear My Crazy, Kooky Conspiracy Theory About 1/6? 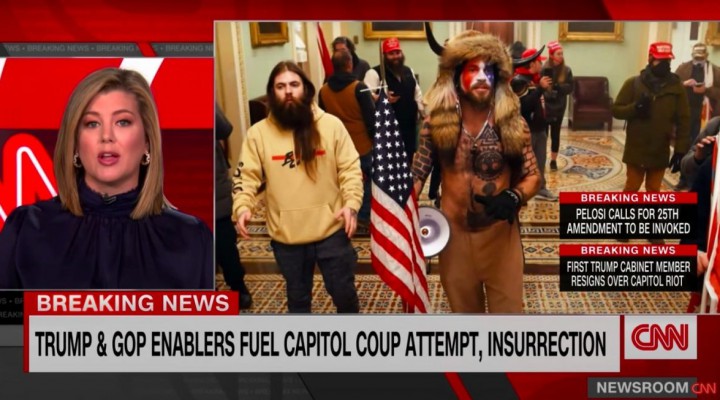 Glenn Greenwald has a new article out titled “Questions About the FBI’s Role in 1/6 Are Mocked Because the FBI Shapes Liberal Corporate Media” about the backlash against right wing media highlighting the incredibly suspicious fact that rank-and-file participants in the January 6 Capitol riot have been harshly prosecuted while its actual leaders and organizers have not been.

Greenwald goes over the FBI’s extensive and well-documented history of using undercover agents and informants to entrap easily manipulated individuals into participating in “terror” plots that they themselves initiated and then swooping in to save the day, how unlikely it is that such informants and undercover agents would not have been active in the groups responsible for the Capitol riot, and how unacceptable it is that so little is known about what the FBI and other government agencies were actually doing with regard to these groups in the lead-up to an incident they absolutely knew was coming.

Questions About the FBI's Role in 1/6 Are Mocked Because the FBI Shapes Liberal Corporate Mediahttps://t.co/wuHhoj5zSB

Journalist Whitney Webb also has a new article out titled “Who Is A ‘Terrorist’ In Biden’s America?” about the White House’s new government-wide strategy for confronting the latest big scary boogie man the US public is being trained to fear, namely “domestic terrorism”. Webb flags how the strategy is framed as an approach to countering widely loathed groups like white supremacists, but the White House document describing what it actually does makes it clear that it intends to operate in “an ideologically neutral, threat-driven manner,” as the law “makes no distinction based on political view—left, right or center.”

“However, the document itself puts ‘anti-government’ or ‘anti-authority’ ‘extremists’ in the same category as violent white supremacists in terms of being a threat to the homeland,” Webb writes. “The strategy’s characterization of such individuals is unsettling.”

“For instance, those who ‘violently oppose’ ‘all forms of capitalism’ or ‘corporate globalization’ are listed under this less-discussed category of ‘domestic terrorist,'” Webb adds. “This highlights how people on the left, many of whom have called for capitalism to be dismantled or replaced in the US in recent years, could easily be targeted in this new ‘war’ that many self-proclaimed leftists are currently supporting. Similarly, ‘environmentally-motivated extremists,’ a category in which groups such as Extinction Rebellion could easily fall, are also included.”

(This lines up with an assessment by the ODNI released in March in which the US intelligence cartel places “anarchist violent extremists” and “anti-government/anti-authority violent extremists” on the same level as racially motivated extremist violence. The document says that activism and mere advocacy of political or social positions “may not constitute violent extremism, and may be constitutionally protected,” which of course implies that it “may” not be.)

Webb describes the dangers in the White House strategy’s “call to essentially fuse intelligence agencies, law enforcement, Silicon Valley, and ‘community’ and ‘faith-based’ organizations such as the Anti-Defamation League, as well as unspecified foreign governments, as partners in this ‘war,’ which the strategy makes clear will rely heavily on a pre-crime orientation focused largely on what is said on social media and encrypted platforms.”

And you can call me a crazy tinfoil hat wearing conspiracy theorist if you like, but I can’t help wondering if these two stories might perhaps be related somehow. If maybe, just maybe, the FBI’s suspicious behavior before and after the Capitol riot has something to do with the agenda to implement authoritarian measures designed to stomp out any revolutionary impulses that might emerge in an increasingly impoverished and oppressed population.

If maybe, just maybe, the opaque government agencies who run America in alliance with the plutocratic class are deeply afraid of the rising discontent of the masses who greatly outnumber them.

If maybe, just maybe, the fact that the mainstream narrative about the Capitol riot has been full of plot holes, outright falsehoods and narrative spin from the very beginning and has been used to advance preexisting agendas from day one is a bit odd.

If maybe, just maybe, QAnon being an obvious psyop should have been a bit of a hint.

If maybe, just maybe, the fact that the incoming Biden administration had already been working on adding new domestic terror policies before January 6 should raise a few eyebrows.

If maybe, just maybe, the fact that Biden has often boasted that he was the original author of the Patriot Act is not irrelevant to the timing of all this.

If maybe, just maybe, the fact that the Capitol riot was immediately used as an excuse to target the left should have been seen as a warning of things to come.

If maybe, just maybe, the leftists who jumped aboard the CNN narrative about the Capitol “coup” in the hope that it could be used to rally the left were misguided and should now adopt a more critical posture.

If maybe, just maybe, the agenda to sustain an unsustainable economic model and an unsustainable empire is expected to require a few more screw turns than the public is likely to accept voluntarily, and precautions are being put in place to prevent a meaningful backlash.

If maybe, just maybe, there was an agenda to implement frightening new “domestic terror” laws to keep Americans from mobilizing against their rulers, and an excuse was cooked up to manufacture support for that agenda.

Patriot Act 2.0 will be rolled out with a lot of mindless bleating about white supremacists and fighting fascism and the actual policies and laws put into place will have virtually nothing to do with any of those things.

I know I’m being a crazy, mentally ill conspiracy theorist here by using this space to wonder about these things. I know it’s practically against the law to voice theories about what conspiracies might be taking place behind the thick walls of government secrecy which prevent us from seeing anything. I know we’re not supposed to speculate, and are supposed to instead trust that these known liars and abusers are doing the right thing until they see fit to inform us that they are not. I know we’re supposed to wait patiently until all the facts come in from institutions which we all know will never give us the facts.

I am behaving badly. I am breaking the rules.

A Domestic Terrorism Law? War on Dissent Will Proceed Full Speed Ahead

Don’t Fall For The Establishment’s Tall Tales. There Was No “Violent Assault on the Capitol” and There is Abundant Evidence of Electoral Fraud

0 thoughts on “Who Wants To Hear My Crazy, Kooky Conspiracy Theory About 1/6?”