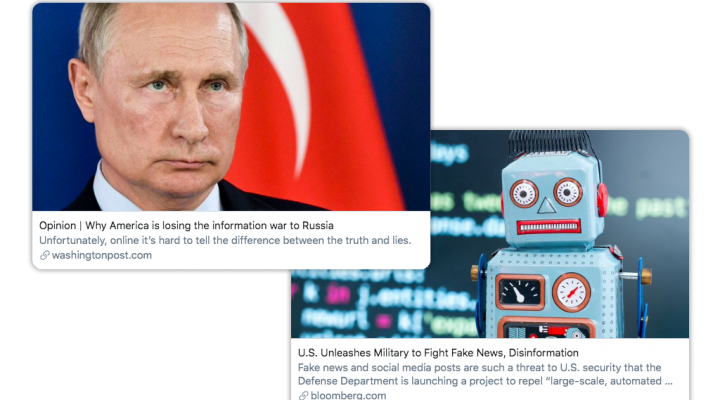 Do you lay awake at night terrified that the Russians are able to control your mind with information warfare while the US government’s slavish devotion to democratic values leaves it powerless to stop them? Me neither. But according to The Washington Post, whose sole owner is a CIA contractor and Pentagon board member bent on hijacking the underlying infrastructure of the economy, we should be.

WaPo columnist David Ignatius, who has been one of the more hyperbolic promulgators of western Russia hysteria in written media, has published an article titled “Why America is losing the information war to Russia” about a new book by former State Department undersecretary for public diplomacy Richard Stengel. Stengel and Ignatius engage in a joyful Red Scare frolic with the exuberance of two little boys with a box of spray paints, each trying to one-up the other in hysterical apocalyptic ominousness about the way evil, authoritarian governments like Russia have been able to weaponize information while freedom-loving democracies can only look on in passive despair.

“The cruel paradox of the Internet, once hailed as a liberating force, is that it empowers governments that control information and enfeebles those that let it run free,” warns Ignatius.

“[Authoritarian governments] have gone from fearing the flow of information to exploiting it,” cautions Stengel. “They understand that the same tools that spread democracy can engineer its undoing.”

Unsurprisingly, at no point during this brotherly romp does Ignatius bother to make mention of the fact that Stengel is actually on recordsaying he supports the use of propaganda and believes the US government should be using it on its own citizens.

“Basically, every country creates their own narrative story and, you know, my old job at the State Department was what people used to joke as the ‘chief propagandist’ job,” Stengel said last year at an event organized by the shockingly ubiquitous narrative management firmCouncil on Foreign Relations.

“I’m not against propaganda,” Stengel said. “Every country does it, and they have to do it to their own population, and I don’t necessarily think it’s that awful.”

When an audience member objected to what he’d just heard, Stengel curtly dismissed him and ended the talk.

So anyway, that’s what the CIA/Pentagon/plutocracy-tied Washington Post wants you to be sure of: that evil governments are controlling your mind with information warfare, and that the US government is struggling to rescue you from that fate. Lucky for you, this report just so happens to be coming out at the same time as we’re learning that the Pentagon is already currently working on a program to protect you from wrongthink by controlling your access to information.

“If successful, the system after four years of trials may expand to detect malicious intent and prevent viral fake news from polarizing society,” Bloomberg reports.

DARPA (formerly ARPA) is a top contender among some very stiff competition for the absolute creepiest of all US government agencies. Journalist Yasha Levine has done a lot of work documenting the way the agency has been intimately involved in internet surveillance since before the internet was even really a thing, beginning in the 1960s with its ARPANET program whose technologies went on to form the foundationof the World Wide Web. DARPA is also engaged in such charming activities as exploring ways to knit AI into human neurology, funding programs to control America’s election infrastructure, pouring billions of dollars into the creation of a robot army and constructing robotic insects which can crawl up walls.

Futurists have long envisioned a utopia where mankind reaps the benefits of soaring technological innovations which will overcome our every obstacle and lead us to an unprecedented state of human thriving. What they failed to account for was sociopathic government agencies like DARPA being intimately involved in those technologies from the very beginning.

Whoever controls the narrative controls the world. Governments understand this and so do their propagandists, and so, increasingly, do the rank-and-file public. Which is why you’ve now got establishment narrative managers like CNN’s Jim Sciutto saying things like “Let’s please ban the word ‘narrative’ from our discussion of the news and this president. There is only one version of the facts and the truth.” Mass media propagandists would like nothing better than to have people cease paying attention to the concept of narrative and go back to believing that when they turn on CNN they are receiving objective truth from the authoritative arbiters of absolute reality.

But that cat’s out of the bag. What has been seen cannot be unseen. A large number of people are aware that there are some very powerful forces who have a vested interest in controlling the thoughts that are in their head, and that number is growing every day. These powerful forces have responded to this new development by becoming increasingly ham-fisted in regulating the public’s access to ideas and information, and now it’s a race to see if they can slam the gates on us before we escape our cage forever.