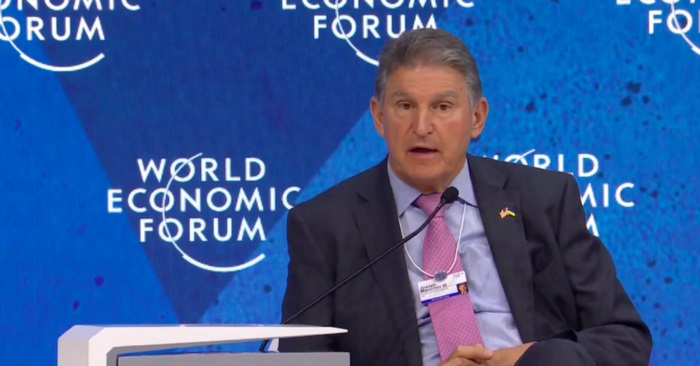 US Senator Joe Manchin said at the World Economic Forum on Monday that he opposes any kind of peace agreement between Ukraine and Russia.

Manchin, who at the moment is one of the most powerful elected officials in Washington, added that only the complete forcible ejection of Russia from all of Ukraine is acceptable, that the war should ideally be used to remove Putin from power, and that he and the strategists he talks to see this war as an “opportunity”.

“I am totally committed, as one person, to seeing Ukraine to the end with a win, not basically with some kind of a treaty; I don’t think that is where we are and where we should be,” Manchin said.

“I mean basically moving Putin back to Russia and hopefully getting rid of Putin,” Manchin added when asked what he meant by a win for Ukraine.

Joe Manchin, speaking today at the World Economic Forum, rejects the idea that the Ukraine war should ever be resolved with "some type of a treaty." Instead demands fighting "to the end," until total victory — which includes "getting rid of Putin" pic.twitter.com/wPj8qfsF1P

Manchin clarified that he did not mean pushing Putin back to “pre-February”, ostensibly meaning with Russia still controlling the largely Moscow–loyal Crimea and supporting separatist territories in the Donbass, but with Kyiv fully reclaiming all parts of the nation.

“Oh no, I think Ukraine is determined to take their country back,” Manchin said when asked to clarify, further clarifying that he wants his call for regime change in Russia to be carried out by “the Russian people.”

“I believe strongly that I have never seen, and the people I talk strategically have never seen, an opportunity more than this, to do what needs to be done,” Manchin later added. “And Ukraine has the determination to do it. We should have the commitment to support it.”

In this next clip Manchin says he and the strategists he talks to have never seen an "opportunity" like this war to "do what needs to be done" against Putin. 2/2 pic.twitter.com/wzDhL22piH

Manchin’s comments fit in perfectly with what we know about the US-centralized empire’s real agendas in Ukraine.

Earlier this month Ukrainian media reported that UK Prime Minister Boris Johnson told the nation’s president Volodymyr Zelensky on behalf of NATO powers that “even if Ukraine is ready to sign some agreements on guarantees with Putin, they are not.”

Last month US Secretary of “Defense” Lloyd Austin acknowledged that the goal in this war is not peace in Ukraine or the mere military defeat of Russia but to actually weaken Russia as a nation, saying “We want to see Russia weakened to the degree that it can’t do the kinds of things that it has done in invading Ukraine.”

Last week The New York Times reported that the Biden administration is developing plans to “further choke Russia’s oil revenues with the long-term goal of destroying the country’s central role in the global energy economy.”

Just the other day Ukraine’s military intelligence chief announced that the mission has already creeped forward from the goal of defeating the Russian invaders to reclaiming the Crimean territory which was annexed by the Russian Federation in 2014.

Two months ago Biden himself acknowledged what the real game is here with an open call for regime change, saying of Putin, “For God’s sake, this man cannot remain in power.”

Statements from the Biden administration in fact indicate that they expect this war to drag on for a long time, making it abundantly clear that a swift end to minimize the death and destruction is not just uninteresting but undesirable for the US empire.

This is not a proxy war with peace as an option anywhere within sight. It’s not about saving Ukrainian lives. It’s not even about beating Russia in Ukraine. It’s about achieving regime change in Moscow, no matter how many lives need to be destroyed in the process.

Peace is not on the menu.

Yes, The Ukraine War Could Have Been Prevented

An agreement in which Ukraine promised to remain a neutral country and the fulfilment of the Minsk accords could have stopped Putin’s invasion, @I_Katchanovski explains.https://t.co/iZjTYxNaA8

This war could easily have been prevented with a little diplomacy and reasonable compromise. As the University of Ottawa’s Ivan Katchanovski recently explained to The Maple, “an agreement in which Ukraine promised to remain a neutral country and the fulfilment of the Minsk accords could have stopped Putin’s invasion.”

We know now that the US intelligence cartel had good visibility into what the Kremlin had planned for Ukraine, so they would have known exactly what could have been done to prevent the invasion. They knowingly chose to do none of those things, because the goal was to provoke this war the entire time and then weaponize it against Moscow.

That’s why the Biden administration has been hindering diplomatic efforts to negotiate an end to this war, why it has refused to provide Ukraine with any kind of diplomatic negotiating power regarding the possible rollback of sanctions and other US measures to help secure peace, and why Washington’s top diplomats have consistently been conspicuously absent from any kind of dialogue with their counterparts in Moscow.

Empire spinmeisters and their propagandized victims like to claim that Ukrainian forces are fighting for “peace” in Ukraine. The other day Kyiv Independent’s Illia Ponomarenko, who has called the neo-Nazi Azov Battalion his “brothers in arms,” tweeted this:

Good god, I want peace in Ukraine by Christmas time.
Fireworks and joy in the snowy streets of Kyiv. Patriotic music, strangers hugging each other at the Maidan, “merry Christmas, war is over.”
That would be just awesome, don’t you guys think so?

But anyone who understands this war knows this is ridiculous. Peace is not the goal in Ukraine. Most of the Ukrainians doing the fighting surely believe they are fighting for peace in their homeland, and peace is surely their intention, but that’s not something the empire will allow if the empire gets any say in the matter.

Even if Ukraine does somehow avoid being used as cannon fodder to draw Moscow into a long and costly slog as US officials have admitted was done in both Afghanistan and in Syria, and even if they do somehow manage to deliver a crushing and conclusive defeat to Moscow in the near term (which is far less probable than the western media would have you believe), that wouldn’t be the end of the war. The war would just change shape as the empire and its proxies go on the offensive against Moscow.

This war does not end with Russia being driven from Ukraine, it ends with regime change and the balkanization of the Russian Federation. Really it doesn’t end until the rise of China has been stopped and US unipolar hegemony secured. Or when the empire collapses. Or when we all die in a nuclear holocaust.

Pulitzer Prize winning author Chris Hedges speaks truth the to real power in this country. No Way Out but War, by @ChrisLynnHedges https://t.co/40QLqi7fKl

All forward motion in this war has nothing but violence as far as the eye can see on its trajectory into the future. No matter how much wealth and war machinery you pour into this conflict, that trajectory of death and destruction will just keep stretching out to the horizon. As Chris Hedges recently explained, war is the only path the empire has left open to itself.

I’ve seen some cute kids in my time, but nobody’s as adorable as people who think the US pours weapons into foreign nations in order to achieve peace.

Is US Commitment to Ukraine War at Tipping Point?