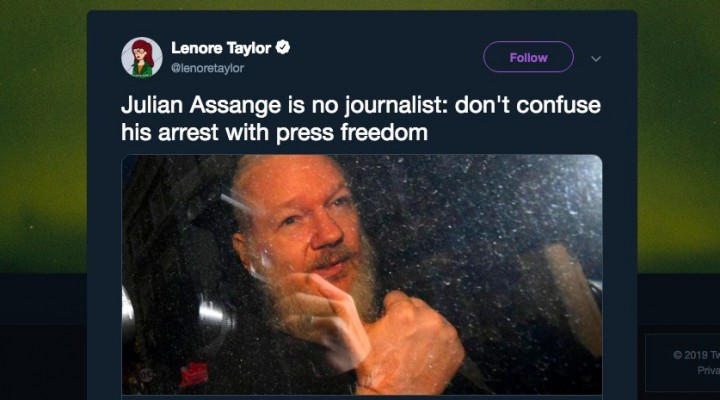 Since I published my last article about about the idiotic “Assange isn’t a journalist” smear, this talking point has become more and more commonplace in online discourse. It’s very important to defenders of the political status quo for us all to believe that Assange is not a journalist, because otherwise that would mean they’re cheering for a dangerous precedent which would allow for the prosecution of journalists who exposed the truth about US government malfeasance. And that would mean cognitive dissonance, which all defenders of the political status quo spend most of their day-to-day mental energy running away from.

So in the past few days, editorials like this one from free press avatar Peter Greste have popped up all over the place with their own definitions of what journalism is in order to argue why that label can’t possibly apply to Assange. All of these definitions ultimately boil down to the argument that because Assange doesn’t publish leaks in a way that they feel journalism ought to be practiced, it isn’t journalism and therefore sets no legal precedent for journalists around the world. As though the US government is going to be consulting their feelings about what specifically constitutes journalism the next time they decide to imprison a journalist for doing what Assange did.

It doesn’t work that way, sugar tits. Assange is being prosecuted by the Trump administration for standard journalistic practices, he stands no chance of receiving a fair trial, and it is very likely that he will be hit with far more serious charges for his activities once on US soil. The next time the US government, under Trump or someone else, sees another journalist anywhere in the world doing something similar to what Assange did, there will be nothing stopping them from saying, “We need to lock that person up like we did Assange; they’re doing the same sort of thing.”

It’s just so amazingly arrogant how people imagine that the way their feelings feel will factor into this in any way. Like the US Attorney General might show up on their doorstep one day with a clipboard saying “Yes, hello, we wanted to imprison this journalist based on the precedent we set with the prosecution of Julian Assange, but before doing so we wanted to find out how your feelings feel about whether or not they’re a real journalist.”

When you see professional media figures decreeing “Julian Assange is not a journalist,” compare how much corruption & criminality by the world’s most powerful factions they’ve exposed in their work to how much Assange has exposed. That contrast will tell you all you need to know.

Also, the question “is X a ‘journalist’?” – as though it’s a credentialed, licensed status like being a doctor or lawyer – is deceitful. The First Amendment’s press freedom protects *an activity* available to everyone – not just a designated priesthood called “journalists.”

1,876 people are talking about this

In reality, journalism has always been and will always be defined as an activity. It’s not like being a doctor. If you happen to witness a car crash and you give CPR on the scene, you are not a doctor in that moment, but if you take some photos and post them online with a summary of what you saw then you are engaging in the act of journalism and all the legalities and rules of journalism apply to you.

The particular journalistic activities that the US is currently trying to extradite Assange for is encouraging a source to give him more documents and conspiracy to help Manning hide her identity so that she would not be persecuted for her heroic act of whistleblowing. In other words, Assange was attempting to make sure Manning’s leaks had enough impact to justify the risk, and also to try and make sure she wasn’t caught and tortured for it.

As Glenn Greenwald has pointed out on Twitter, the indictment describes an activity that all investigative journalists partake in all the time. A source offers you some docs and you see a gap that needs to be filled, you will ask them to get them for you. A source fears they will be found out and you do what you can to hide their identity. That’s journalism at its most raw and dangerous and important. Check out the film Spotlight to see a fairly true version of what the journalists at the Boston Globe had to do in order to expose the pedophile ring of the Catholic Church. These high level crimes must be exposed for people’s safety, but the higher the level the crime, the more risk there is in its exposure.

To be clear, you only have to engage in these kinds of activities when you are exposing the most powerful people with the most political clout for the most heinous of crimes. Julian Assange and Chelsea Manning suspected she was risking years of torture if she was found out, and history has since proved them both correct.

So of all the many enraging aspects of all of this extraordinary act of Nice Guy Fascism, one of them is the constant bloviation of the mainstream media elite with their endless personal definitions of what makes a one journalist. You’d think they were quaffing wine at an opening and wanking on about whether the paintings in the gallery were really art. “This journalist is not a journalist, my five year old son could paint that!” they grandstand to any poor bastard within earshot while inhaling olives and patting the waitress on the bum.

Not sure indiscriminate dumping of thousands of classified documents is “investigative journalism” – also being a patsy of Russia to damage Clinton in favour of Trump is hardly heroic. #Assange?

374 people are talking about this

Julian Assange is no journalist: don’t confuse his arrest with press freedom https://www.smh.com.au/national/assange-is-no-journalist-don-t-confuse-his-arrest-with-press-freedom-20190412-p51di1.html …

Julian Assange is no journalist: don’t confuse his arrest with press freedom

As someone who has been imprisoned by a foreign government for publishing material that it didn’t like, I have a certain sympathy with Assange. But my support stops there.

112 people are talking about this

These people have obviously had their personal opinions taken far too seriously for far too long. It’s truly the hallmark of someone whose mother put too many of their crappy crayon drawings on the fridge when you think that your precious little homespun definition of what constitutes journalism will serve as a legal precedent in the years to come. No one will care about your feelings regarding who is a real journalist or not when the long arm of the US empire reaches out across the planet and nabs the next guy for exposing inconvenient truths about the US military-industrial complex or US corporate interests. No one is going to grant you a sit-down and consult you about your oh-so-fascinating ruminations about the next journalist they wish to use Assange’s precedent on.

It’s obvious to any journalist who doesn’t have their head up their ass that this is the beginning of the end of the fourth estate. Want to expose the US corporate corruption fueling the degradation and desecration of your environment in your particular province in the world? Oh well, uh-oh, now you’ve found yourself on a plane to Gitmo.

Journalism is an activity. It is bringing the detrimental activities of the powerful to the light, regardless of how you do it, whether it’s through the legacy media, publishing documents, or making a Facebook post. The powerful are not entitled to a private space where they can abuse humans or resources. They don’t get to commit crimes in secret just because they are rich or in government. Journalism is the only way the everyday person has any window into what the powerful are doing to them, doing to their planet, doing with their tax money, and doing in their name.

So in every way it is probably even worse if you don’t consider Assange a journalist. This precedent puts every single person on earth in danger. That means you can be nabbed wherever you may be on the globe for helping a whistleblower, and I’m sorry to say to all you impassioned bloviators, you will not be consulted on how your feelings feel about whether they fit your dubious definition of what a journalist is, because journalism is an activity, not an elitist club of which you have been the self-proclaimed gatekeeper for so long.

These narcissistic wankers are a severe danger to press freedom and they need to put their personal proclivities aside and start fighting a very dangerous legal precedent that is being set right before our eyes.