MSM Promotes Yet Another CIA Press Release As News 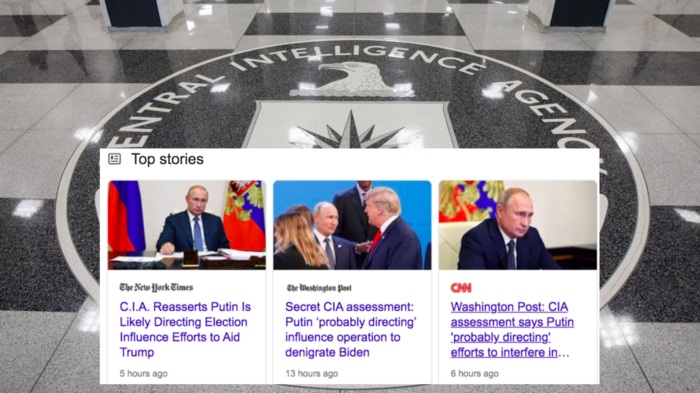 The Washington Post, whose sole owner is a CIA contractor, has published yet another anonymously sourced CIA press release disguised as a news report which just so happens to facilitate longstanding CIA foreign policy.

In an article titled “Secret CIA assessment: Putin ‘probably directing’ influence operation to denigrate Biden”, WaPo’s virulent neoconservative war pig Josh Rogin describes what was told to him by unnamed sources about the contents of a “secret” CIA document which alleges that Vladimir Putin is “probably” overseeing an interference operation in America’s presidential election.

True to form, at no point does WaPo follow standard journalistic protocol and disclose its blatant financial conflict of interest with the CIA when promoting an unproven CIA narrative which happens to serve the consent-manufacturing agendas of the CIA for its new cold war with Russia.

And somehow in our crazy, propaganda-addled society, this is accepted as “news”.

The CIA has had a hard-on for the collapse of the Russian Federation for many years, and preventing the rise of another multipolar world at all cost has been an open agenda of US imperialism since the fall of the Soviet Union. Indeed it is clear that the escalations we’ve been watching unfold against Russia were in fact planned well in advance of 2016, and it is only by propaganda narratives like this one that consent has been manufactured for a new cold war which imperils the life of every organism on this planet.

None of this stopped The Washington Post from publishing this propaganda piece on behalf of the CIA. None of it stopped this story from being widely shared by prominent voices on social media and repeated by major news outlets like CNN, The New York Times, and NBC. And none of it stopped all the usual liberal influencers from taking the claims and exaggerating the certainty:

America is so screwed up right now that the CIA has determined that Putin is directing efforts to interfere in the 2020 election against Biden, and a collective shoulder-shrug is all we can muster. ¯_(ツ)_/¯

The CIA-to-pundit pipeline, wherein intelligence agencies “leak” information that is picked up by news agencies and then wildly exaggerated by popular influencers, has always been an important part of manufacturing establishment Russia hysteria. We saw it recently when the now completely debunked claim that Russia paid bounties on US troops to Taliban-linked fighters in Afghanistan first surfaced; unverified anonymous intelligence claims were published by mass media news outlets, then by the time it got to spinmeisters like Rachel Maddow it was being treated not as an unconfirmed analysis but as an established fact:

If you’ve ever wondered how rank-and-file members of the public can be so certain of completely unproven intelligence claims, the CIA-to-pundit pipeline is a big part of it. The most influential voices who political partisans actually hear things from are often a few clicks removed from the news report they’re talking about, and by the time it gets to them it’s being waved around like a rock-solid truth when at the beginning it was just presented as a tenuous speculation (the original aforementioned WaPo report appeared on the opinion page).

The CIA has a well-documented history of infiltrating and manipulating the mass media for propaganda purposes, and to this day the largest supplier of leaked information from the Central Intelligence Agency to the news media is the CIA itself. They have a whole process for leaking information to reporters they like (with an internal form that asks whether the information is Accurate, Partially Accurate, or Inaccurate), as was highlighted in a recent court case which found that the CIA can even leak documents to select journalists while refusing to release them to others via Freedom of Information Act requests.

While we're not saying that the #CIA deliberately leaks inaccurate information to the press, we will that there's a specific form they have to fill out when they do so. https://t.co/9C7z9xC0WP #FOIA pic.twitter.com/SFube47v1V

A lying, torturing, propagandizing, drug trafficking, assassinating, coup-staging, warmongering, psychopathic spook agency with an extensive history of deceit and depravity that selectively gives information to news reporters with whom it has a good relationship is never doing so for noble reasons. It is doing so for the same rapacious power-grabbing reasons it does all the other evil things it does.

"Lastly, the dumbest thing about believing foreign nations are interfering in American democracy is believing America has any democracy to interfere with."https://t.co/1BatXPtUut

The coming US election and its aftermath is looking like it will be even more insane and hysterical than the last one, and the enmity and outrage it creates will give manipulators every opportunity to slide favorable narratives into the slipstream of people’s hot-headed abandonment of their own critical faculties.

And indeed they are clearly prepared to do exactly that. An ODNI press release last month which was uncritically passed along by the most prominent US media outlets reported that China and Iran are trying to help Biden win the November election while Russia is trying to help Trump. So no matter which way these things go the US intelligence cartel will be able to surf its own consent-manufacturing foreign policy agendas upon the tide of outrage which ensues.

The propaganda machine is only getting louder and more aggressive. We’re being prepped for something.