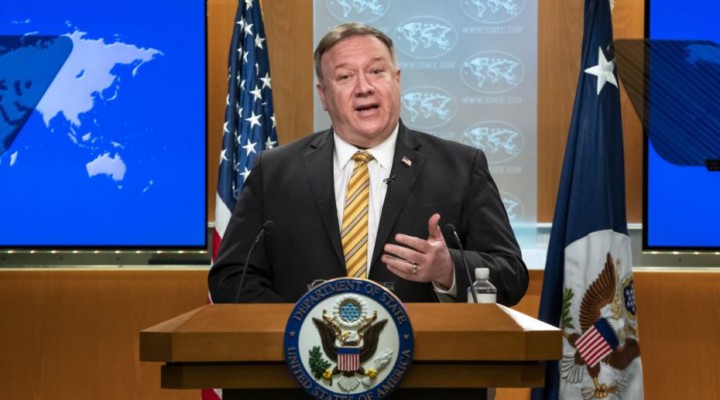 A major focus of the CIA from its very inception was the penetration of the news media, including the assignment of CIA agents to the newsrooms and editorial offices of America’s largest media operations.

The release a report by the U.S. Department of State’s Global Engagement Center (GEC), billed as the Donald Trump administration’s “dedicated center for countering foreign disinformation and propaganda, cites the Strategic Culture Foundation in Russia, Canada’s Global Research Center, and other on-line publications as “proxy sites” for Russian intelligence and the Russian Foreign Ministry. The State Department’s report is titled, “Pillars of Russia’s Disinformation and Propaganda Ecosystem” and it is not much different than the series of reports issued by the State Department’s “International Information Program” in the mid-2000s that were used to debase U.S. journalists and authors critical of the George W. Bush-Dick Cheney neo-conservative wars of choice. Those diatribes, like the recent one masquerading as a “special report,” were written on the U.S. taxpayers’ dime and represent a squandering of money.

Diagrams in the recent State Department report depict various on-line publications and Internet sites as coronavirus microbes. The Mike Pompeo-led State Department, which has, along with the Trump White House, issued a daily dose of pabulum that can only be described as conspiracy theory-based rantings from congenital liars and reality-challenged fabulists and fanatical right-wingers, have no ethical or political grounds to proclaim virtuousness when it comes to spewing forth propaganda and outright lies.

One could easily issue a multi-volume report that deals with America’s propaganda factory both during the Cold War and in its aftermath. A major focus of the U.S. Central Intelligence Agency from its very inception was the penetration of the news media, including the assignment of CIA agents to the newsrooms and editorial offices of America’s largest media operations, including The Washington Post, The New York Times, Hearst Newspaper, NBC News, ABC News, CBS News, and other major newspapers and broadcast networks. The CIA also thoroughly infiltrated America’s political polling companies, including Gallup, Harris, and Roper. Details concerning the CIA’s Operation MOCKINGBIRD and “The Mighty Wurlitzer” propaganda and news influencing operations can easily be found in the annals of America’s post-World War II history. These are activities that the U.S. corporate media, as well as the CIA and State Department would prefer to have global consumers of news ignore.

As far as the State Department’s “Propaganda Ecosystem” report and its earlier incarnation, the International Information Program (IIP), are concerned, they are remnants of U.S. Cold War-era disinformation shops. The IIP’s chief propagandist was a one-time colleague of disgraced Republican lobbyist Jack Abramoff in formulating pro-apartheid propaganda for South Africa’s minority apartheid government in the 1980s – Project Babushka. In the 1980s, through a front organization in Washington established by South Africa’s military establishment – the International Freedom Foundation (IFF) – propaganda was regularly churned out to argue against sanctions imposed on the apartheid regime. Serving as chairman of the editorial advisory board for the IFF’s publication branch—a group that pumped out all sorts of propaganda claiming that the African National Congress and Nelson Mandela were Communists – was none other than the far-right Republican Senator from North Carolina, Jesse Helms. Today, Helms has been replaced by similar vile right-wing political creatures like Republican Senators Tom Cotton of Arkansas, Lindsey Graham of South Carolina, and Ron Johnson of Wisconsin, who are always willing to carry the political tripe doled out by the Trump White House and Pompeo State Department.

Operating out of the State Department, the IIP launched vicious attacks on two American writers – this one included – as well as the Argentine newspaper Clarin, the Sunday Mirror (London), Quinto Dia (Venezuela), and other publications over their reports on the George W. Bush administration’s covert and war crime operations in Iraq, Afghanistan, Venezuela, Southeast Asia, Iran, and Pakistan. The IIP even attacked The Los Angeles Times over its story on the kidnapping of poor children from poverty-ravished Latin American barrios for the purpose of organ harvesting. The IIP’s true masters in Israel were upset about the coverage because it involved Israeli human organ brokers.

The head of the State Department’s “Counter Mis-Information Team” in the mid-2000s was a long-time neoconservative propaganda operative who had previously worked for the U.S. Information Agency’s (USIA) Bureau of Information to counter Soviet and other disinformation with his own Brand X of American disinformation. Finland’s Helsingin Sanomat newspaper accurately reported that the State Department’s IIP was part of the Bush administration’s effort to convince the world that Saddam Hussein had weapons of mass destruction (WMD). The IIP also struck back against the Helsingin Sanomat report, stating that any suggestion that false WMD intelligence was cooked up by the Bush administration was merely a conspiracy theory and that the faulty intelligence on Iraqi WMD was merely a huge “mistake.”

The most laughable charge made by Pompeo’s underlings in their pathetic “Propaganda Ecosystem” diatribe is that Russia has been perpetuating through proxy media “conspiracy theories related to COVID-19.” This charge comes from a government whose top leadership, including Trump, have stated that COVID-19 is a “hoax,” was released deliberately by China, that if U.S. medical personnel refrained from testing for the virus the number of overall cases would decrease, and that wearing masks had no effect on viral spread. Trump’s Director of National Intelligence, John Ratcliffe, is a believer in Qanon conspiracy drivel, which, among other “gems,” claims that the late John F. Kennedy, Jr. faked his own airplane crash death in 1999 and is poised to join Trump on the presidential tickets to jointly combat global pedophiles. Pompeo, a fundamentalist “Christian,” believes that the Earth is only 6000 years old and that once, humans co-existed with the dinosaurs.

There is no need to continue to highlight the completely insane rantings that have been issued forth by officials of the Trump administration on a daily basis. In the long run, global consumers of news will long remember Mr. Trump advocating drinking poisonous disinfectants like bleach as a cure for COVID-19 than any of the poppycock contained in the State Department’s most recent propaganda report dubbed as a “counter-propaganda” account.

State’s Global Engagement Center and International Information Program are two useless peas from the same right-wing pod. It is clear that the Trump administration’s actual goal is to impose a global censorship regime on the Internet. The GEC’s report lists the terms that would be verboten under a Trump-Pompeo censorship regime. They include “Zionist,” “Greater Israel,” “U.S. bio-warfare,” as well as any article complementary of the governments and/or policies of Venezuela, Cuba, Iran, Nicaragua, Syria, Russia, and China. The GEC report condemns the website SouthFront and its coverage of the Syrian conflict but, of course, is silent about the Syrian Observatory for Human Rights (SOHR), a British intelligence front operated out of a tailor shop in Coventry, England. The GEC believes that no one should be able to read what they describe is pro-Bashar al-Assad “propaganda” on SouthFront, while encouraging information consumers to drown themselves with the anti-Assad claptrap from SOHR that is regularly echoed, without any critical comment, by the Western corporate media.

Internet users are quite capable to making up their own minds about what information they choose or choose not to believe. Mr. Pompeo’s State Department and U.S. Attorney General William Barr’s annoying door-knocking “thought police” with the FBI are not needed to help anyone, including this writer, choose what and what not to believe or speak and write about.