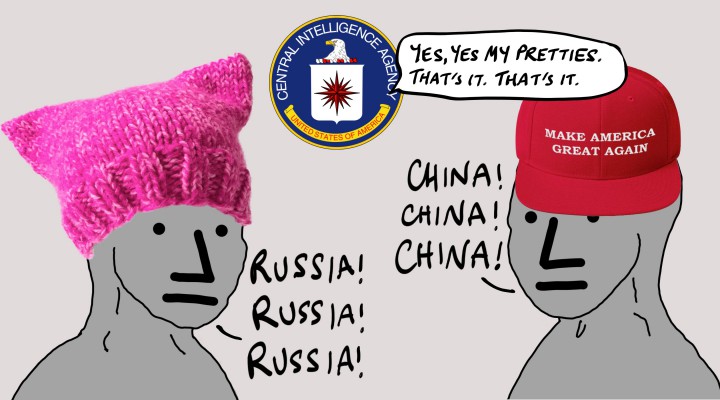 The hashtag #ChinaLiedPeopleDied was recently sent trending on Twitter by “new right” pundit Michael Courdrey with the amplification of all the usual Trump bootlickers and their sheep-like followers, further feeding into the anti-China cold war hysteria conservatives have been aggressively pushing with increasingly frenetic urgency lately. Which is hilarious, since these are the same people who’ve spent the last three years making fun of liberals and calling them NPCs for doing the exact same thing with Russia.

And when I say the exact same thing, I mean literally the exact same thing. The frenzied, shrieking hysteria I’m witnessing right now among Trump’s base regarding China looks and moves in the exact same way the mental zombification of Russia hysteria looked and moved when it began tearing through rank-and-file Democrats in late 2016 and early 2017. The seething, screaming vitriol I get from the MAGA crowd on social media when I talk about this is identical to what I got during that period from Democrats: just as irrational, just as vituperative, and just as emotion-driven.

The 2020 outbreak of China hysteria is so identical to the 2016/2017 outbreak of Russia hysteria that as of this writing if you do a Twitter live search right now for the word “wumao” or “CCP paying you” you’ll see an endless stream of Trump supporters running around bleating accusations of being a paid troll for the Chinese Communist Party at anyone who disputes their hysterical China narratives.

Same with the word "wumao". Trump bootlickers are bleating accusations of being a Chinese propagandist in exactly the same way liberals have been bleating "How's the weather in St Petersburg, Ivan?" at anyone who questions establishment narratives.https://t.co/UCVrVV9I63

Anyone who’s ever shared anti-establishment ideas on social media will immediately recognize this as identical to accusations which come from the pussyhatted #Resistance crowd of brainwashed MSNBC liberals, who accuse anyone who questions establishment narratives of being a paid troll conducting propaganda for the Russian government. These “How much is the CCP paying you for this?” accusations which have been cluttering up my social media notifications for the last 24 hours are indistinguishable from the “How’s the weather in St Petersburg, Ivan?” McCarthyite accusations I’ve been receiving from rank-and-file Democrats for the last three years.

Just like the froth-mouthed victims of media-induced Russia hysteria, the victims of media-induced China hysteria are always unable to justify their sudden Beijing anxiety in a way that makes any coherent sense. I’ve spent the last few days debating these poor wretches online, because that’s what I do whenever a new sociopathic establishment narrative surfaces to gain an understanding of how it works, and I have yet to encounter a single one which can coherently reconcile the sudden uptick in shrieking China hysteria with the thing that China has always been throughout its historical existence.

They’ll tell me it’s because China lied about the virus and made errors in the early days of the outbreak, but can’t lucidly explain how screaming about this helps fix any problem, and can’t justify the fact that lying about the virus and making errors is exactly what their president just spent weeks doing. They’ll tell me it’s because China is authoritarian, but can’t explain the sudden uptick in outrage over this since China has always had an authoritarian government and that has nothing to do with the virus. They’ll parrot establishment narratives about Uighurs and organ harvesting, but, again, can’t explain how this has any connection to the virus.

When I point out that there are extremely powerful government agencies which stand much to gain from manufacturing consent for new escalations against America’s primary geostrategic rival I mostly get more outraged, incoherent sputtering, but once in a while a more thoughtful China Derangement Syndrome victim will say they don’t want any escalations against China, they just want to end an economic relationship between China and the US which they perceive as unfair. But, again, this has nothing to do with the virus, and also it’s a mighty interesting coincidence that they’ve formed this opinion about the one nation who just so happens to be America’s primary geopolitical foe.

This inability to draw a rational straight line from the facts in evidence to their hysterical anti-China bleating tells you that they are not rending their garments over China because of facts in evidence, they’re reacting emotionally to recent propaganda narratives they’ve been spoon fed and then listing off the things they’ve heard about China in an attempt to justify their irrational behavior.

In reality these people are rallying behind the campaign to blame China for the health crisis they’re now facing because they understand that otherwise the blame will land squarely on the shoulders of their president, who’s running for re-election this year. Deep down they know full well that this isn’t really about China, but about protecting their president. But what they are actually doing, unwittingly, is manufacturing consent for an agenda which is far bigger and far more consequential than who wins the election in November. And it’s no accident that they’re being shepherded in this direction with the help of right-wing establishment narrative managers.

Russiagate Isn't About Trump, And It Isn't Even Ultimately About Russia #China #Russiagate #TrumpRussiahttps://t.co/6QhzZGNPfX

More than two years ago I wrote an article titled “Russiagate Isn’t About Trump, And It Isn’t Even Ultimately About Russia”, about how all these Russia escalations (and the propaganda used to justify them) are ultimately not really about Russia at all, but China. Here’s an excerpt:

This is what Russiagate is ultimately about. Democrats think it’s about impeaching Trump and protecting the world from a nigh-omnipotent supervillain in Vladimir Putin, Trump’s supporters think it’s a “deep state coup” to try and oust their president, but in reality this has nothing to do with Trump, and ultimately not a whole lot to do with Russia either. When all is said and done, Russiagate is about China.

In an essay titled “Russia-China Tandem Changes the World”, US-Russia relations analyst Gilbert Doctorow explains how the surging economic power China depends upon Russia’s willingness to go head-to-head with America and its extensive experience with US attempts to undermine the USSR during the Cold War. Alone both nations are very vulnerable, but together their strengths are complementary in a way that poses a direct threat to America’s self-appointed role as world leader.

And now we’re seeing one of America’s two mainstream factions cheerleading for increased hostility toward America’s primary rival, while the other faction cheerleads for increased hostility against that rival’s right arm. This two-pronged propaganda campaign has enabled the establishment via the Trump administration to escalate tensions not just with China but with Russia as well.

This tracks with something I’ve been pointing to for a while now, which I described in an article from last year titled “37 Tips For Navigating A Society That Is Full Of Propaganda And Manipulation”:

Added some more tips to this article from last year in order to help navigate through the haze of narrative manipulation in these confusing times. https://t.co/Z05RH16IlB

I wrote more about the way the establishment manipulators get the mainstream factions arguing over which nation should be targeted with aggression, rather than if any nations should be targeted at all, in a January 2020 article titled “On The Idiotic Partisan Debate Over Regime Change In Iran Or Syria”:

Syria and Iran are allies. Eliminating one government necessarily hurts the other. Iran has been helping Syria to win the war against foreign-backed extremist proxy fighters who nearly succeeded in toppling Damascus before its allies stepped in, and should Syria succeed in rebuilding itself (something the Trump administration is actively preventing it from doing) we can be sure it would return the favor when called upon.

We are now seeing this exact same two-pronged approach used with Russia and China. We’ve actually been seeing it for years, like in this affectionate debate between former CIA Director James Woolsey and Fox News’ Laura Ingraham over which of the two nations America should be more aggressive toward, but it’s kicked into high gear now.

America has two war parties. The Overton window of acceptable mainstream debate has been ripped away from those who simply want peace and a healthy planet altogether, and now the only permitted arguments are about which wars should occur first.

This is gravely disordered, and it cannot continue.

My work is entirely reader-supported, so if you enjoyed this piece please consider sharing it around, liking me on Facebook, following my antics onTwitter, checking out my podcast on either Youtube, soundcloud, Apple podcasts or Spotify, following me on Steemit, throwing some money into my hat on Patreon orPaypalpurchasing some of my sweet merchandis