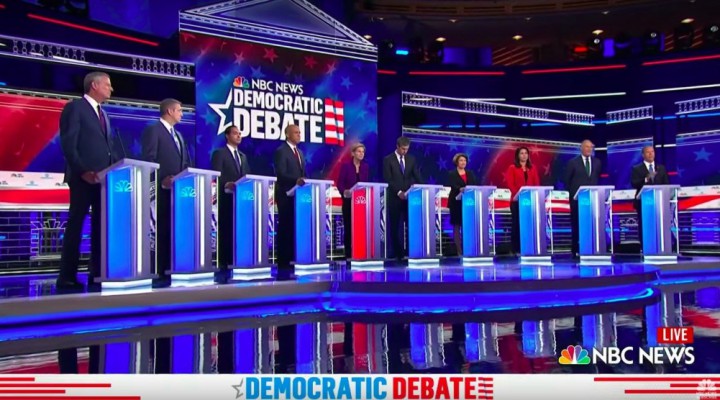 Lester Holt: Hello and welcome to the Democratic Party presidential debates, where tonight ten people will pretend to be much further to the left than they actually are so that normal human beings will like them.

Savannah Guthrie: Our first question is for Senator Elizabeth Warren. Senator Warren, you have many plans for America. Many, many plans. Is this correct?

Elizabeth Warren: Yes that is correct. I have many plans to make things better, and Americans must come together and work together as Americans to make America America.

Savannah Guthrie: Thank you. Congressman O’Rourke, how do you feel about taxing the wealthy?

Cory Booker: Hey I can speak Spanish too!

Savannah Guthrie: Yes, yes you both can speak Spanish. This next question is for Senator Warren. Senator, you have many plans for America. Do you think rich people should be allowed to feast on the flesh of poor people?

Elizabeth Warren: No. We should stop allowing rich people to eat poor people because there are laws against this and my plan is to enforce those laws.

Julián Castro: I can actually speak Spanish better than anyone here, so I pretty much win this debate.

Cory Booker: Yeah well I live in a poor neighborhood.

Lester Holt: You shut your whore mouth, Delaney. Senator Warren, we haven’t heard from you in a while. You’ve got lots of plans for America. Do you believe every American should have healthcare?

Elizabeth Warren: Yes, every American should be allowed to have healthcare.

Julián Castro: I pronounce Hispanic names correctly, too. Like, perfectly.

Bill de Blasio: May I just interrupt for a moment to say that I am a white guy who would like to be president?

Lester Holt: Yes, you may.

John Delaney: Can I?

Lester Holt: Fuck you, limp dick. Governor Inslee, you’re a white guy who wants to be president. How do you feel about a woman’s right to choose?

Jay Inslee: I basically invented it.

Amy Klobuchar: I would like to collect my identity politics points for him saying that please.

Cory Booker: The neighborhood I live in is rather poor actually.

Tim Ryan: I also am in this debate.

Lester Holt: It’s time for a commercial break, but we’ll be back with more Elizabeth Warren after this.

Chuck Todd: Welcome back to the-

Chuck Todd: And we’re back! Senator Warren, you’ve got a lot of plans for America. Do you think it’s good for people to be murdered with guns, or bad?

Chuck Todd: Brilliant. Congresswoman Gabbard, you have said that you hate gay people and you want them all to die and go to hell so you can urinate on their graves by the light of a blood moon. How, specifically, do you sleep at night?

Tulsi Gabbard: I do not hate gay people.

Chuck Todd: Right. Congressman O’Rourke, if I asked you a normal question in plain English, would you please give me a straight answer in response?

Beto O’Rourke: You know one of the most powerful pieces of art in the United States capital is the Trumbull painting of George Washington resigning his commission to the Continental Congress, at the height of his power submitting to the rule of law and the will of the people. That has withstood the test of time for the last 243 years, and some people say well does this mean that neoliberalism can’t work? And I always say you know what? We’re AmeriCANs, not AmeriCAN’Ts. I say we CAN come together, as Americans, as white Americans, as black Americans, as gay, trans and Latino Americans, and we can find a neoliberalism that works for all of us.

Chuck Todd: Please stop standing on top of your podium.

Cory Booker: I too can speak with lots of inspiring-sounding words. I speak them really intensely, like I’m trying to rip into your guts with my voice. I live in a poor neighborhood. People get shot. Shot right in the face. You people don’t even know.

Tim Ryan: I would like to use my small amount of time to argue for the indefinite occupation of Afghanistan because the Taliban attacked us on 9/11.

Tulsi Gabbard: They definitely did not.

Tim Ryan: You are the same as Donald Trump.

Rachel Maddow and Chuck Todd: SHUT THE FUCK UP, DELANEY.

Amy Klobuchar: You know, sometimes giving the rich and powerful people everything they want is the most progressive and revolutionary thing you can do.

Rachel Maddow: Okay we’re running out of time, so everyone quickly give your parting remarks.

Bill de Blasio: I am well-known and I have familiarized myself with the progressive-sounding things to say.

Tulsi Gabbard: I’m like a hundred percent certain I could take Mike Pompeo in a fair fight.

Tim Ryan: This is the weirdest Republican primary debate I’ve ever participated in.

Jay Inslee: I- wait, which one am I again?

Beto O’Rourke: Together, all things are possible in America, where our inspiration to thrive outweighs our differences and overcomes our obstacles, and I don’t know about you, but I believe we can all make positive changes and sail off together into the sunset in a sailboat on a field of wheat.

Julián Castro: Even the names of Central and South American countries. I pronounce them absolutely perfectly.

Amy Klobuchar: Klobuchar 2020! Together, we can make small, incremental changes or leave them the way they are if it’s too politically inconvenient!

Cory Booker: In my very poor neighborhood they call me Crazy Eyes. They say it’s because my eyes are so normal.

Elizabeth Warren: You cannot stop me. I am inevitable.

Chuck Todd: And we’re out of time! Tune in tomorrow for more of the same with Bernie Sanders, Joe Biden, Kamala Harris, Iggy Silverstein, Jorp Japson, Merv Meebleton, and many other famous politicians!

Democratic “Superdelegates” May Once Again Rob Bernie Sanders of the Nomination