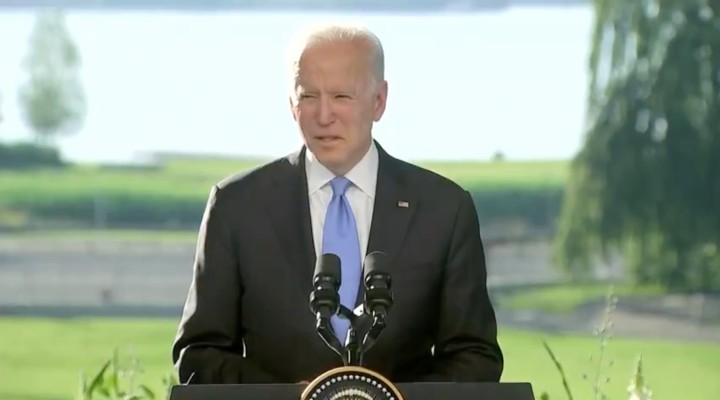 During an astonishingly sycophantic press conference after the Geneva summit with Vladimir Putin, President Biden posited an entirely hypothetical scenario about what the world would think of the United States if it were interfering in foreign elections and everybody knew it.

When AP’s Jonathan Lemire asked the president of the most powerful government in the world what “consequences” he’d threatened the Russian leader with should the Kremlin interfere in US elections going forward, Biden meandered his way through one of his signature not-quite-lucid word salads, and then said the following:

“Let’s get this straight: How would it be if the United States were viewed by the rest of the world as interfering with the elections directly of other countries, and everybody knew it?  What would it be like if we engaged in activities that he is engaged in?  It diminishes the standing of a country that is desperately trying to make sure it maintains its standing as a major world power.”

The fact that the entire press corps did not erupt in side-splitting laughter at this ridiculous utterance is in itself proof that western news media is pure propaganda. The United States has directly interfered in scores of foreign elections since it began its ascent to global domination at the end of the second World War, to say nothing of all the coups, color revolutions, proxy conflicts and regime change military invasions it has also participated in during that time. The US openly interfered in Russia’s elections in the nineties, and literally just tried to stage a coup in Bolivia by interfering in its democratic process. The US is far and away the single most egregious offender in the world on this front, which is largely why it is perceived around the world as a greater threat to democracy than any other government.

This is not a secret, internationally or in the United States. Anyone who has done any learning about the US government’s actual behavior on the world stage knows this. Hell, a former CIA director openly joked about it on Fox News a few years ago.

Fox’s Laura Ingraham unsurprisingly introduced former CIA Director James Woolsey as “an old friend” in a 2018 interview about Special Prosecutor Robert Mueller’s indictment of 13 alleged members of a Russian troll farm, in which Woolsey unsurprisingly talked about how dangerous Russian “disinformation” is and Ingraham unsurprisingly said that everyone should actually be afraid of China. What was a bit surprising, though, was what happened at the end of the interview.

“Have we ever tried to meddle in other countries’ elections?” Ingraham asked in response to Woolsey’s Russia remarks.

“Oh, probably,” Woolsey said with a grin. “But it was for the good of the system in order to avoid the communists from taking over. For example, in Europe, in ’47, ’48, ’49, the Greeks and the Italians we CIA-”

“We don’t do that anymore though?” Ingraham interrupted. “We don’t mess around in other people’s elections, Jim?”

Woolsey smiled and said said “Well…”, followed by a joking incoherent mumble, adding, “Only for a very good cause.”

And then they both laughed.

The fact that not one person in the press pool questioned or criticized Biden’s outrageous remarks tells you everything you need to know about the western media and what its real function is. This is further illustrated by the rest of the behavior of these odious propagandists during the summit, which was illustrated quite well by the glowing praise of Democratic Party insider Andrea Chalupa on Twitter:

“The winners of #GenevaSummit2021 are the White House press corp,” Chalupa said. “Excellent questions confronting Putin and challenging Biden on holding a summit with a ruthless dictator. And they literally held their ground when shoved by Putin’s security and propagandists.”

That actually says it all. Western reporters are forbidden by their oligarchic owners from ever confronting power in any meaningful way; the closest they’re ever allowed to get to punching up is challenging the leaders of CIA-targeted governments, and demanding to know why their own officials aren’t being more hawkish and aggressive toward those leaders.

Can anyone imagine a US corporate journalist screaming at Biden: "Why do you fear Assange so much?"

Always easy to condemn the acts of the governments your country tells you to see as Enemy. Much harder – and way more meaningful – to challenge your own government's repression. https://t.co/CtzeU37pn3

Real journalists go to Belmarsh Prison for exposing US war crimes. Western propagandists ask Putin why he’s such a doodoo dumb dumb poopy head and then dream about Pulitzers all night.

Western news media exists to funnel propaganda into the minds of the public. It is controlled by plutocrats who work in alliance with opaque government agencies to weave narratives about why the US government needs to do the things it had already planned on doing anyway. This gets more obvious by the day.