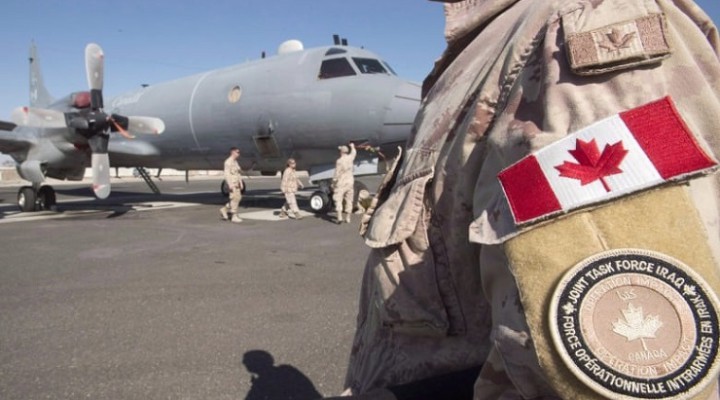 Two recent events, both overshadowed by the ongoing conflict in Ukraine, help illustrate how the same problematic aspects of Western foreign policy driving the Ukrainian conflict are hard at work in provoking conflict with yet another global power, China.

Western complaints about an alleged naval base China is accused of building in Cambodia and an altercation between Chinese and Canadian patrol aircraft in the North Pacific reflect growing tensions between an inflexible and declining Western unipolar order and a rising China that increasingly refuses to subordinate or explain itself to the West upon the global stage.

While peaceful coexistence would not only be possible but preferable in regards to global peace, stability, and prosperity, the US-led “rules-based international order” has openly declared its intentions of inhibiting China’s rise and has demonstrated just how far in terms of disrupting global peace, stability, and prosperity the US and its allies are willing to go to achieve this.

China is secretly building a naval facility in Cambodia for the exclusive use of its military, with both countries denying that is the case and taking extraordinary measures to conceal the operation, Western officials said.

The establishment of a Chinese naval base in Cambodia — only its second such overseas outpost and its first in the strategically significant Indo-Pacific region — is part of Beijing’s strategy to build a network of military facilities around the world in support of its aspirations to become a true global power, the officials said.

The unnamed Western officials failed to point out just how far China actually has to go to become a “true global power” in terms of building military installations abroad. A 2021 Al Jazeera article titled, “Infographic: US military presence around the world,” noted that, “The US controls about 750 bases in at least 80 countries worldwide and spends more on its military than the next 10 countries combined.”

The notion that China’s activities in Cambodia are “secret” is also questionable. Both China and Cambodia are surely aware of the full extent to which China is or isn’t involved at Cambodia’s Ream Naval Base. Neither nation is required to provide an explanation to the United States whose own shores are located thousands of miles away.

While the Washington Post accuses China of using  “a combination of coercion, punishment and inducements in the diplomatic, economic and military realms,” to “bend” nations to Beijing’s interests, it is actually the United States who threatens not only Cambodia, but nations throughout Southeast Asia, all of whom seek to cultivate constructive ties with China.

Late last year, according to AP in their article, “US orders arms embargo on Cambodia, cites Chinese influence,” Cambodia was openly penalized simply for its growing ties with China. The article would claim:

Beijing’s support allows Cambodia to disregard Western concerns about its poor record in human and political rights, and in turn Cambodia generally supports Beijing’s geopolitical positions on issues such as its territorial claims in the South China Sea.

The construction of new Chinese military facilities at Cambodia’s Ream Naval Base is a point of strong contention with Washington.

Clearly, US claims about Chinese foreign policy is pure projection. The US would be pressed to cite specific “punishments” China has dispensed to nations simply for cultivating ties with the US. The US, on the other hand, not only imposed various economic penalties on Cambodia’s government, Washington has also sponsored opposition forces who openly aim to overthrow the current Cambodian government.

“…the USA that has assisted me, they asked me to take the model from Yugoslavia, Serbia, where they can change the dictator [Slobodan] Milosevic,” he continues, referring to the former Serbian and Yugoslavian leader who resigned amid popular protests following disputed elections, and died while on trial for war crimes.

He would also claim:

“I do not do anything at my own will. There experts, professors at universities in Washington, DC, Montreal, Canada, hired by the Americans in order to advise me on the strategy to change the dictator leader in Cambodia.”

If Cambodia, whose constitution prohibits the presence of foreign military facilities on its territory, is willing to risk public backlash for allowing China to construct a “secret base” there, it might be as a means of preventing the country from becoming the next Ukraine.

Also in the headlines recently is a row growing between China and Canada over the latter’s air patrols “monitoring” North Korea.

“The UN Security Council has never authorized any country to carry out military surveillance in the seas and airspace of other countries in the name of enforcing sanctions,” foreign ministry spokesman Zhao Lijian said at a media briefing.

And indeed, the UN has not authorized Canada or any other nation to fly air patrols to enforce sanctions on North Korea. The Canadian patrol aircraft are so far from Canada’s own territory, they are actually based in Japan throughout the duration of these “monitoring” missions.

The United States’ self-appointed role as arbiter of who can and cannot construct military bases around the globe and Canadian patrol aircraft assuming global jurisdiction including off China’s own shores and around its neighbor’s shores, are illustrations of American exceptionalism (and by extension, the exceptionalism of their closest allies).

This exceptionalism led to the crisis in Ukraine which followed the US overthrow of the elected Ukrainian government in 2014.  The US began a process of militarizing the nation which shares a substantial border with the Russian Federation. Whereas the US was allowed to send its military to Ukraine to train forces for an eventual war with Russia, the US and its allies decried Russian military deployments within Russia’s own territory to put in check the growing threat Ukraine was being transformed into.

Whereas the US was able to interfere deeply in Ukraine’s internal political affairs, Russia was accused of backing separatists in the Donbas region and thus of fuelling the 8 year war that precipitated ongoing military operations in Ukraine today.

Likewise, the US is able to maintain hundreds of military bases around the globe, including those constructed as part of illegal wars of aggression and subsequent occupations. China, however, is apparently “wrong” for the potential use of part of an existing Cambodian naval facility, with Cambodia’s consent.

US allies like Canada are able to fly “patrol aircraft” thousands of miles from their own shores to “monitor” territory near Chinese shores and those of their neighbors, but China is unable to scramble its own aircraft to intercept and monitor these “patrols.”

In the past, this exceptionalism went unchecked. Because of China’s rise, there is a growing sense of balance being reintroduced into what has been until now a unipolar world order. While the US government and the Western media will complain about China’s growing ties both economically and militarily throughout the Indo-Pacific region, there is little the US can do to stop it. Its increasingly coercive and aggressive policies to punish nations seeking to do business with China may disrupt whatever balancing act many nations have been performing between East and West, driving them deeper into partnership with China and thus only succeed in isolating the US itself.

Only time will tell if the US continues down this increasingly destructive path, Ukraine being only the most recent victim of American exceptionalism, or if the US begins finding a constructive role within the emerging multipolar world.

AUKUS Is Employing Psychological Terrorism To Justify Its Creation