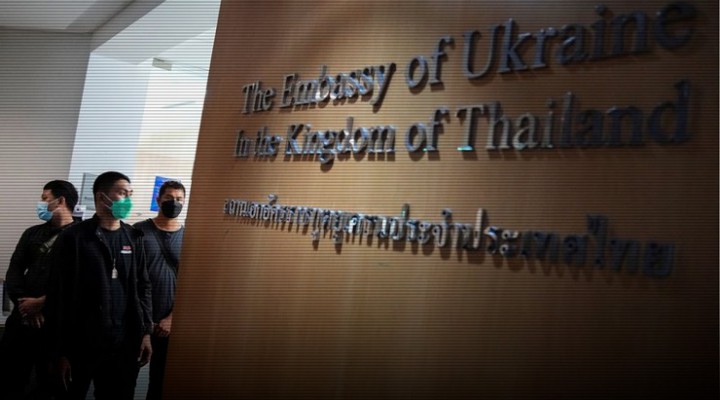 As Russia’s special operations continue in Ukraine so does the West’s propaganda war against it. The propaganda is particularly effective but also particularly predictable in terms of who will be drawn in by it and become hysterical because of it.

This includes right-wing extremists from across the Western world but also the many US-sponsored “pro-democracy” movements elsewhere. This includes within the Southeast Asian Kingdom of Thailand.

Reuters in an article titled, “Thai democracy activists sign up to fight ‘tyranny’ in Ukraine,” would claim:

Far-off Thailand might not seem an obvious place for recruits to Ukraine’s efforts to raise an international volunteer force to defend against Russia’s invasion.

But for former Thai Air Force conscript turned political activist Chanaphong “Ball” Phongpai, the cause is a natural fit for members of the pro-democracy movement that emerged in 2020 to protest a military-backed government in the Southeast Asian country.

Reuters would also claim that these Thai “activists” saw Russia as a “superpower and a tyrant,” lifting phrases verbatim from the halls of Western power and from across Western media headlines.

After years of covering up the violent nature of US-sponsored anti-government protest in Thailand, Reuters obliquely admitted in its more recent article that indeed the protests were violent, noting how those interested in fighting in Ukraine claimed they needed to “switch from holding bottle bombs to holding guns.”

The article concluded by quoting one of the so-called activists, claiming:

“We fight for democracy here. They fight for their democracy there,” he said. “We are like friends. Its the same feeling, the same ideology.”

It is without doubt that Thais seeking to fight in Ukraine share a similar ideology with Ukraine’s current regime and those fighting to sustain it. But while Reuters and the Thai “activists” it interviewed attempted to insist that ideology shared is “democracy,” in reality the true common denominator is subordination to US interests, extensive US backing, and belligerent intolerance to alternative views as well as a deep disdain for the primacy of national sovereignty.

Far from “Russian propaganda,” evidence that Ukraine’s current political order is propped up by actual Nazis including those playing a central role in Ukraine’s current security apparatus has been provided by the Western media itself, every single year since the US-backed coup overthrew Ukraine’s last legitimate elected government in 2014.

In 2014, for example, The Guardian in its article, “Azov fighters are Ukraine’s greatest weapon and may be its greatest threat,” would focus on members of the so-called “Azov Battalion,” noting that while they denied they were Nazis, they openly praised Adolf Hitler and used Nazis symbols for their flags and on their uniforms. The article noted the key role Azov played in the ongoing armed conflict already raging at that point in eastern Ukraine.

By 2015 the Western media admitted that Azov Battalion was rolled into Ukraine’s armed forces as part of the National Guard. Reuters in an article that year titled, “Ultra-nationalist Ukrainian battalion gears up for more fighting,” would note:

The 1,000 strong ultra-nationalist militia has a reputation as a fierce pro-government fighting force in the almost year-old conflict with the Russia-backed rebels in east Ukraine, and is disdainful of peace efforts.

But the radical views of the commanders of a group affiliated to Ukraine’s national guard which works alongside the army, and the use of symbols echoing Nazi emblems have caused alarm in the West and Russia, and could return to haunt Kiev’s pro-Western leadership when fighting eventually ends.

Reuters would also point out in its article that Azov had evolved into an organization including infantry, artillery, and even tank forces.

In addition to admissions across the West’s corporate media, are also articles from outlets like Radio Free Europe/Radio Liberty (RFE/RL) funded by the US government. A 2016 RFE/RL article titled, “Right-Wing Azov Battalion Enters Ukraine’s Political Arena,” would note that in addition to Azov’s inclusion in Ukraine’s armed forces, the armed organization sought to work its way deeper into the government itself.

The US government-funded outlet would also admit that, “human rights organizations have accused the Azov Battalion of torture,” highlighting the obvious outcome of arming actual Nazis and giving them an increasing amount of power both on the battlefield and off it.

By 2017 the threat Azov Battalion posed to both Ukrainians and Ukraine’s neighbors had raised serious concerns – concerns that many in the halls of Western political power attempted to dismiss as “Russian propaganda.” However, even Western media outlets would contradict this claim. An article that year by The Hill titled, “The reality of neo-Nazis in Ukraine is far from Kremlin propaganda,” would note:

There are indeed neo-Nazi formations in Ukraine. This has been overwhelmingly confirmed by nearly every major Western outlet. The fact that analysts are able to dismiss it as propaganda disseminated by Moscow is profoundly disturbing. It is especially disturbing given the current surge of neo-Nazis and white supremacists across the globe.

The most infamous neo-Nazi group in Ukraine is the 3,000-strong Azov Battalion, founded in 2014. Prior to creating Azov, its commander, Andriy Biletsky, headed the neo-Nazi group Patriot of Ukraine, members of which went on to form the core of Azov. Biletsky had stated that the mission of Ukraine is to “lead the White Races of the world in a final crusade for their survival … against the Semite-led Untermenschen.”

The idea that Thai volunteers are attempting to travel to Ukraine and fight alongside actual Nazis against “tyranny” takes on a particularly contradictory tone in light of such observations made even across the a Western media landscaped mostly committed to covering up the true nature of Ukraine’s post-2014 regime and its increasingly toxic security apparatus.

By 2018 even US government-funded RFE/RL would note the danger Ukrainian military formations like Azov posed to nations beyond Ukraine’s borders. An article that year titled, “Azov, Ukraine’s Most Prominent Ultranationalist Group, Sets Its Sights On US, Europe,” pointed out the concerted effort made by Azov to build ties with ultra-right extremists from across the Western world.

In 2019, Israeli publication Haaretz attempted to draw attention to the growing danger in its article, “Inside the Extremist Group That Dreams of Ruling Ukraine.” The article would elaborate further, claiming:

The Azov movement insists it is not neo-Nazi, yet its members have been captured giving Hitler salutes and being virulently anti-Semitic.

The threat of Nazism in Ukraine’s security forces and as well as within Ukraine’s political structures was pointed out even by the inveterate Russophobic US government-funded think tank, The Atlantic Council.

In a 2020 article titled, “The Azov Regiment has not depoliticized,” the Atlantic Council would admit that even the US government was debating whether or not to designate Azov as a “Foreign Terrorist Organization” and that Ukrainian Nazis still played a central role in Azov’s political and military activities.

Also in 2020 Western media outlets like Buzzfeed in articles like, “This Neo-Nazi Group Is Organizing On Facebook Despite A Year-Old Ban,” would point out how Azov was by then designated by the US State Department as a “nationalist hate group” and that despite a supposed ban of the organization across US-based social media, US corporations like Facebook continued making exceptions for and profits from Azov’s online activities.

TIME Magazine in an eight minute long video report titled, “Inside a White Supremacist Militia in Ukraine,” would showcase Azov Battalion’s nationwide political and military activities including running camps for children indoctrinating them into white supremacist ideology, providing them with military training, and preparing them to be inducted into military formations like Azov in the near future.

By 2022 US-based media outlet NPR in an article titled, “A closer look at the volunteers who are signing up to fight the Russians,” would admit that members of Azov were the ones receiving foreign volunteers precisely like the Thais mentioned by Reuters seeking to fight “tyranny” in Ukraine.

The NPR article would admit in regards to Azov that:

That regiment has a reputation for having the fiercest fighters in Ukraine. The paramilitary is credited with recapturing the southern port city of Mariupol from Russian separatists in 2014. And despite their neo-Nazi affiliations, they were folded into Ukraine’s National Guard. Groups like this are what Putin uses when he tries to paint Ukraine as rife with Nazis. It’s part of his justification for invading.

And according to the Western media itself, these claims by “Putin” are far from “attempts” to “paint Ukraine as rife with Nazis.” Ukraine is actually rife with Nazis – so much so that those who believe they will be joining the fight against tyranny will instead be received by the worst forms of tyranny – actual Nazis of formations like Azov Battalion – an organization now many thousands strong, consisting of infantry, artillery, tank, and other forces with detachments located in every major Ukrainian city – in other words – an organization of Nazis Ukraine is utterly rife with.

It is abundantly clear that these Thais now volunteering to fight alongside Nazis in Ukraine had nothing to do with democracy back home. The organizations behind the protests they had been a part of were not a product of Thai democratic aspirations, but of US government funding and interference within Thailand’s internal political affairs. Duped once at home, and now by Western media reports depicting Ukraine as a “victim” of Russian “aggression,” they are being thrown into harm’s way once again for a cause even more hopeless and delusional than the one they failed fighting for at home.

“Volunteers” fighting in Ukraine have already been given a stark wake-up call – their training facility in western Ukraine targeted by a missile strike wiping out most of them, and sending those few who survived fleeing back home, before ever stepping foot on the battlefield.

Buzzfeed in their article, ““I Thought I Was Going To Die”: US And UK Fighters In Ukraine Described The “Chaos” Of A Russian Missile Attack,” make it abundantly clear Russia’s statements regarding the operation was not propaganda, but the actual fate foreign fighters face.

Nations who do little to prevent their citizens from being tricked into traveling to Ukraine to face what is almost certain death provide an example of how Western foreign policy objectives have compromised the self-interests of nations worldwide.

Thais victimized by Western narratives illustrate once again the absolute danger a population can be placed in when a nation like Thailand categorically fails to secure its information space, allowing foreign interests like the US to dominate that information space and prey upon Thai citizens to the point of recruiting them into an armed conflict thousands of miles away.

US control over global media and also social media has only tightened since Russia’s special operations began in Ukraine, and the danger this control the US possess over information space worldwide has only grown. Now more than ever nations around the world need to secure their information space as a matter of national security – and not in some abstract way – but to literally protect their citizens from toxic disinformation so pervasive and compelling, that it has Thais and many others from around the globe  literally signing up to join Nazis in combat.

US-backed Thai Agitators to Fight Alongside Nazis in Ukraine